Since the announcement earlier this year that the third season of Ryan Murphy’s hit FX series American Horror Story will be subtitled Coven, information about exactly when and where the story would be set has been hard to come by. With the recent Television Critics Association summer press tour, some tantalizing tidbits have finally begun to leak out.

Coven will see a reunion of a large portion of the female cast from the series’ premiere season, including mainstays Sarah Paulson, Lily Rabe, Frances Conroy, and Jessica Lange, with Alexandra Breckenridge and Taissa Farmiga returning after a season away. Also re-joining the cast will be Denis O’Hare and Evan Peters. Newcomers for Coven include Patti LuPone, Angela Basset, Gabourey Sidibe, Emma Roberts, and Kathy Bates. 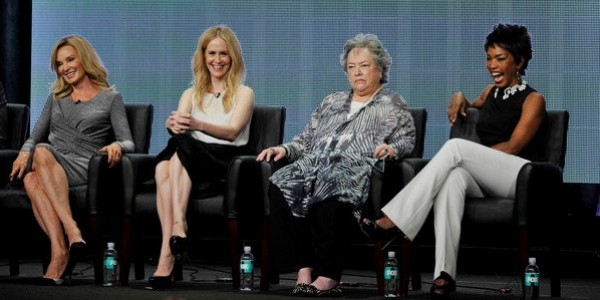 The season will be set in New Orleans, with witches as the central supernatural element (although, knowing Murphy, they might not be the only one). Lange will star as the witch Fiona, with Paulson playing her daughter Cordelia. Bates will portray Fiona’s former best friend who is now her worst enemy, and Conroy will once again go toe-to-toe with Lange as her former high school rival. Basset will be playing the historical role of Marie Laveau, a legendary voodoo priestess. Bates will also be tackling a historical figure, Madame LaLurie, a Louisiana-born socialite and serial killer.

While the season will deal with oppression of all kinds, according to executive producer Tim Minear, it will also have more humor than in past seasons. This will certainly be a much appreciated change for cast members who suffered through the emotional roller coaster of last season’s American Horror Story: Asylum. Coven premieres October 9, 2013.