Fans of Boondock Saints are in for a real treat as creator/director Troy Duffy will be at Comic Con promoting the Boondock Saints comic book. Coming to us from 12 Gauge Comics, is their entire comic con line up. Check it out.

12-Gauge Comics blasts into Comic-Con with an all-star entertainment line up. Featuring guests from comics, television, and film, the 12-Gauge Comics’ booth (#2045) will be loaded with action!

TROY DUFFY, the creator/writer/director of THE BOONDOCK SAINTS film series (and the creative force behind 12-Gauge’s smash-hit comic series, BOONDOCK SAINTS: IN NOMINE PATRIS) will be joined by BOONDOCK SAINTS stars SEAN PATRICK FLANERY and DAVID DELLA ROCCO!  Don’t miss Troy and Rocco’s one and only convention signing Saturday at 4:00 (featuring free movie and comic series posters) and the Prime Time Saturday Night panel (12-Gauge Comics: Boondock Saints: The Comic Series!, 7:30 pm, Room 9) where Troy and co-writer J.B. LOVE will discuss the next installment of the comic series, and the entire crew will take your questions on all things Boondock Saints, including the new iPhone game! 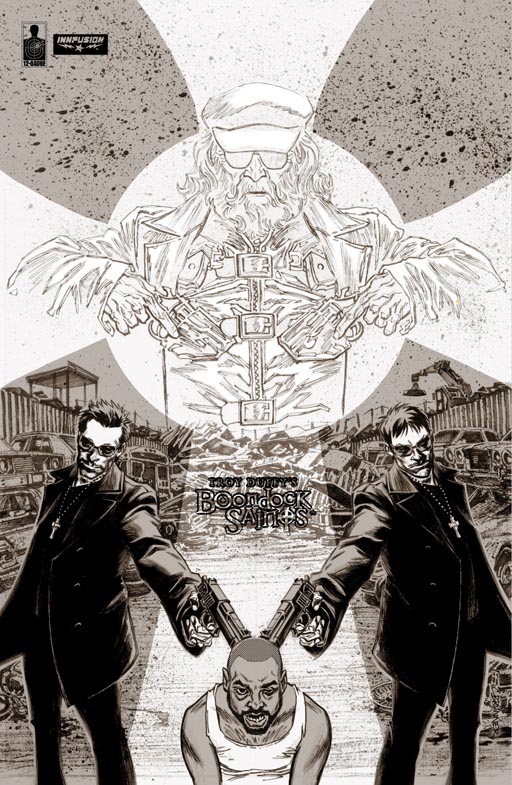 But that’s just the beginning -- New York Times #1 Bestselling Author and 4-TIME World Heavyweight Champion MICK FOLEY will be appearing EXCLUSIVELY at the 12-Gauge booth to promote his upcoming comic series R.P.M.!  Joined by co-writer SHANE RICHES, Mick will be on-hand throughout the day Saturday to fill you in on all the details of his pedal-to-the-metal action adventure series, and to autograph R.P.M. posters and the Comic-Con Exclusive R.P.M. Ashcan – sponsored by Poynt, www.poynt.com –  both FREE with every Mick Foley autograph!

Finally, be sure to get your hands on the Comic-Con exclusive editions of the BOONDOCK SAINTS: IN NOMINE PATRIS #1 & #2 – featuring sketch covers by acclaimed artist CHRIS BRUNNER! 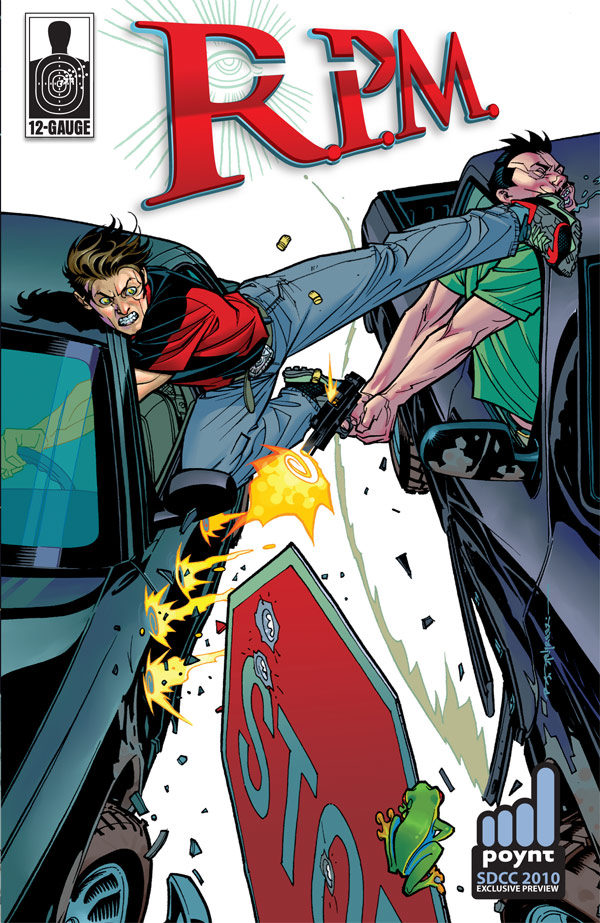 12-Gauge Comics: Boondock Saints: The Comic Series!— Troy Duffy, the writer/director of the cult-hit films The Boondock Saints and The Boondock Saints II: All Saints Day, takes you behind the scenes of his comic trilogy, In Nomine Patris. Find out what’s next for the McManus Brothers and Il Duce, as Duffy and comic series co-writer J.B. Love fill you in on their plans for the next exciting storyline. But that’s not all…get a sneak peek at the new Boondock Saints iPhone game with developer Terrence Myers, and as an extra-special treat, David Della Rocco (the beloved “Rocco” from the films) will be taking your questions during the Q&A session! Moderated by comic series producer Eben Matthews and 12-Gauge publisher Keven Gardner (The Ride). Room 9

Poynt, www.poynt.com, is a local search app for BlackBerry and iPhone.  R.P.M. will be previewed at Poynt's From Dusk 'til Con party with Mick Foley as a special guest.