The survivors are trapped in a parking garage because the soldiers told them that was the safest place. Then the lights go out and a horde of zombies – I mean the "Infected" – appear inside the room. The people scream for their lives and the soldiers are shooting everywhere, killing both the Infected and the survivors. This time it looks like it's going to be the end for everybody. Janice gets shot and killed by the bullets fired from the soldiers' machine guns. Charles and Clint are running for their lives, but this time Charles doesn't care to run anymore and stays behind.

As he is left alone he whispers, "Janice I'm coming." Selena is pissed – she's running but she isn't scared as she maneuvers between the Infected like an action hero taking care of business. Clint is alone and faces a group of Infected but they are too much, plus his knife fell from his hand when he was climbing the fence. This time...this time he is doomed for sure. But like an angel of retribution, Selena rescues Clint. After a fighter jet fires a missile into the Infected crowd, both Selena and Clint are able to make it to safety. Clint looks at Selena and asks why she came back. Selena replies, "What do you think?" And they both kiss with a chaotic explosion serving as their background. 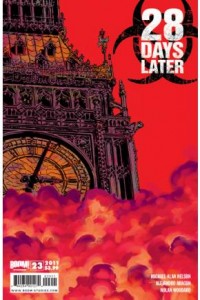 I remember when I saw 28 Days Later (the movie) for the first time. I rented it from a now closed Blockbuster. I wanted to see something scary – hell, I just wanted to see zombies. With 28 Days Later and the remake of Dawn Of The Dead, Shaun of the Dead and the Resident Evil video games it was official; the zombies are back in style. It was a fun time for zombie fans but now everything has zombies: comics, TV, books, even commercials. The only thing missing is a cartoon series. The way things are going I wouldn't be surprised if "My Favorite Zombie" cartoon series make its TV debut next week. The market is saturated by zombies and as a reader you might be tired of the typical zombie stories.

Well 28 Days Later is that typical book. By reading the first paragraph of this article it is easy to see that this is the cliché zombie setting with the same zombie plot like many of the zombie books out there. Yes, the story is solid and very cinematic and the zombies here are called the "Infected," but guess what? They are still zombies! And it's the same zombie survivor story we have seen before. Although the story is set in cliché zombie lore, what makes this book interesting are the little scenes. The book presents powerful images and powerful dramatic scenes. For example: Selena encounters a nervous soldier who is ashamed that he is killing both Infected and survivors. He takes his handgun and threatens to shoot himself. Selena tells him to either run or shoot himself because she needs the gun before the Infected get there. These types of dramatic scenes are what really stand out in this series. The characterization is well-crafted and the dark and chaotic mood of the story is as constant as one of the main characters. What the story lacks is that it doesn't offer anything that might elevate the genre to new heights but stays in the safety net of the genre it plays in.

As for the art, it's very cinematic. The artist knows how to portray this story in an entertaining fashion, with interesting angles and excellent rhythm for action. With every character that Ale Aragon draws, he is able to represent the character's own characteristics into the page. I could read this book just by looking at the art.

The bad thing about this book is that it has no recap page, though you won't need it to enjoy this issue. New readers don't get a chance to know the main characters of the book or the gist of the story. This type of book is more interesting as a mini-series than a monthly title. But if you enjoy the movie or you don't feel sick with all the zombie trends, then this book is still a great adaptation.

Overall Score - 7.0/10
*Good – A solid book overall, but might not be for everyone. It does have a fan base and they will definitely enjoy it.*