28 Days Later #24 hits the streets this week. Boy it sure would be great if the series ends with issue 28. You know... Like the title?  What? The series ends with issue 24? Oh man just when things were getting interesting. Maybe they do 28 Weeks Later or 28 Month Later as a sequel. But what am I talking about? I'm going to miss this series and if they do a sequel to this series they better bring this creative team back for more.

But I know what your thinking. This is another "Zombie book" let me guess they run from the zombies, they kill almost all the characters they started with, they get to safety and chaos ensues. Well if you thought that, congratulations you watch a lot of zombie movies and you may not be far from the truth. 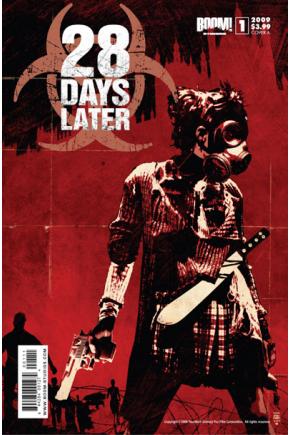 Surprisingly there is not a lot of "infected" action going on, in this last issue. The story focus on Selina and Clint the last two survivors of this series. They are running wild in the streets, their life not just dependent upon running, but also not running into a group of infected. They don't care that their bodies are tired and broken, they don't care that the city has become a apocalyptic wasteland. The love they nest in each other's eyes, is reason enough to dream and hope, that they'll make it to a sanctuary of life. The city is getting gassed, their mortality is put to the test, no longer are the infected their problem but oxygen itself seems to betray them, in a fight against time what would they do?

The great thing about survivor horrors is the high octane drama that you can only get when a good creative team is behind the wheel. Yes the stories can get a little redundant specially with all the zombie media out there, but this is not the case with 28 Days Later. The series manages to insert a shot of fresh air into the drama of the story by focusing on the human factor and the survivor's journey. This is why the story doesn't feel boring or repetitive because it portrays the characters will to survive. Its never about the monsters they serve as a type of "MacGuffin" to lure the readers. The creative team knows this, that's why they gave us such strong characters to begin with. 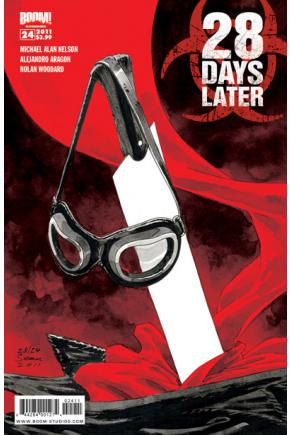 Unlike other survivor horror books, the cast was kept short but interesting, delivering great moments and good action. Now I don't want to spoil the last issue by giving away the ending but I will tell you how they survived the deadly gas...Urine. They soak towels with urine and cover their nose with it, so that the smell of urine, will cut the asphyxiating smell of the gas. This gives way to a interesting scene that shows the vulnerability and desperation surviving among the chaos is all about.

Great character moments, accompany by memorable scenes, this series never gives a dull moment. The dialog is not that fluid but it carries a charm that can enamor any reader. Although the writers play in a setting that is over-extended, he manages to make the best of it by using the clichés to his advantage. The art works perfectly with the words. Showcasing a cinematic almost documental  approach to the story. It is a joy to watch an artist in full control of the visual storytelling. A excellent tour de force, go back and read the whole series and see for yourself.

Although this series ends here, it ends well. It gives readers a satisfactory ending. They should collect this series in a massive volume, that way we can enjoy this from start to finish and if they do, it would be one of those collections that you can read in one sitting because this series is such fun it would be hard to put this book down. Thank you, Michael Alan Nelson, Ale Aragon, Declan Shalvey and all the other creators for giving us a great adaptation and congrats on your final issue.

Overall Score - 8.8/10
*Great- Easily getting a second printing. Worth any comic fan's time and money. A book that you can enjoy and think about life*

Start the series from the beginning if you missed out!