This week Jack and Liz both head out of town on separate adventures, where they each learn that dating someone who is too much like yourself is a “Double-edged sword”.  I’ve observed on several occasions that 30 Rock needs to get away from the backstage hyjinx of TGS, every once and a while, and take the characters out of their usual setting, however this week’s episode was not the right way to do so.

While the set-up for their stories sounds potentially funny, they ultimately don’t play out well. Liz is flying as a passenger on a plane piloted by her boyfriend-of-the-season, Carol, and this is an opportunity to roll out some gags about the well-worn comedy standard of air travel.  Yes, it’s quite funny when Liz is told that airline snack foods are designed to be opened in-flight and could kill someone if opened at sea level, but the humor generally isn’t as snappy as usual for the show. 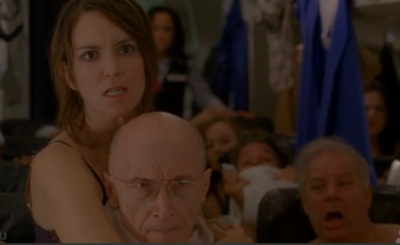 A running gag about Jack’s extreme patriotism comes into play when his child might be born in Canada.   This lets 30 Rock throw in some Canada jokes; yet another well-worn comedy standard. But doesn’t the show already have an excuse for Canada jokes?  After all the oft-neglected character Danny is from Canada, and they’ve already had a few scenes “aboot” how those hoseheads talk funny and use the metric system.  Then there’s the “Going into Labor” storyline, yet another stock sit-com plot.  I usually love when 30 Rock openly takes on cliché’ sit-com premises, but there isn’t much subtly to it this time around; one of the Canadian drug dealers even outright says Avery’s contractions “Sound very sit-comy”. 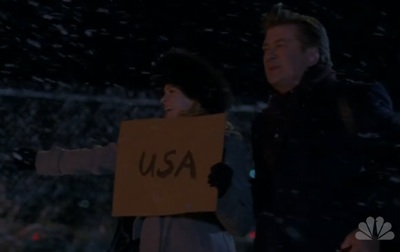 In fact, this episode is extremely blunt in general.  Characters are constantly saying “That’s a double edged-sword” and blatantly stating the underlying subtext.  Pete’s monolog about the Peter Principle is just a mountain of unneeded exposition about something the audience can figure out for themselves.  The usual finesse just isn’t there, even if there are some good on-liners like “Where are my manners, do you wanna try meth?”

At the same time all of this is going on, Tracy learns that success is also double edged sword.  He’s apparently won an Oscar at some point between last week’s episode and this one. For over a year, 30 Rock has been building up the storyline that Tracy is out to win an Emmy, a Grammy an Oscar and a Tony, then the final step of that story happens in an off-screen moment.  It’s rather disappointing, because they could have based an entire episode around Liz shepherding her cast and crew to the Oscars.  What ever zany happenings could have occurred in such a scenario will now have to go untold. 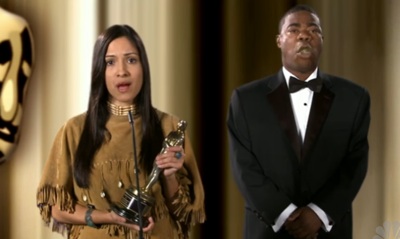 The episode degenerates into farce quickly. 30 Rock is full of outlandish events, but Jack and Liz exchanging envelopes where Jack predicts Liz’s behavior with supernatural accuracy is out of place.  Along the same lines, Liz’s stomach speaking aloud when she’s hungry is too surreal even for this show.  The script has the ring of being doctored up to include extra jokes, rather than being intrinsically funny:  when Jack says that he doesn’t sleep when flying because he’s afraid of being “Incepted”, it is amusing, but that’s more of something Tracy would say.  It also directly contradicts a previous episode where we learn that Jack uses a sleeping pill called Comanaprosil when he flies.

The episode does advance many of the season-long plotlines:  Once again, Liz breaks up with her boyfriend of the year (A trend which has worn out its welcome now that we’re in season five).  Jack’s daughter is born, which brings another of his subplots to a close.  And Tracy departs for “Africa” in the epilog, which sets up some interesting possibilities for the coming episodes.  Despite it’s problems, and missed opportunities, at least “Double-Edge Sword”  still helps to move the series along in terms of overall plot.