30 Rock – Everything Sunny All The Time

Although this week’s episode of 30 Rock featured a cameo appearance by a former US Secretary of State, the true star of the episode was Kim Jong Il, Glorious Supreme Leader of the Illustrious People’s Republic of Korea.  I speak for all Americans when I say I was truly honored that the Supreme Leader lowered himself to appearing on our lowly western televisions.

The Dear Leader General Kim Jong Il granted permission for 30 Rock to have three generous storylines in this episode.  The subplots are as plentiful as the food supplies in the Great Land Of Best Korea.  In one subplot, Jack’s wife has the honor of being granted entry into North Korea and to attend a voluntary re-education camp. Elsewhere, Liz vows that she would work as hard on her personal life as she does on the show. Meanwhile Tracy, Jenna, Kenneth and the entourage engage in some backstage zaniness. 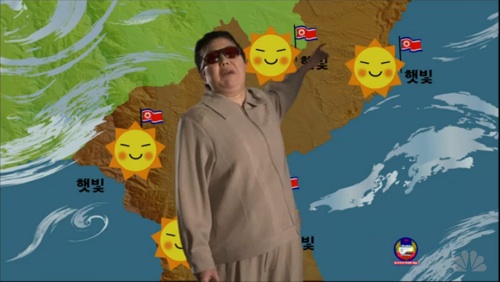 The weakest aspect of this episode is Tracy’s subplot.  He doesn’t want his entourage to have insider jokes without him, which is certainly the sort of thing a crazy movie star might do.  Still, Tracy’s efforts to recreate the “Smooth move Ferguson” event just aren’t particularly funny, aside from the occasion one-liner, like the horse semen joke.  The only parts of it that are funny are the references to Tracy doing a buddy cop movie with Great Hero of Workers Party Kim Jong Il.

Tracy’s subplot does manage to tie in to both of the other storylines.  “Smooth move Ferguson” serves to give Liz one final reminder of her vain struggle against her own mortality.  Liz has some other good scenes on the way to that last confrontation with her inevitable death.  The sight gag as she exits City Hall after battling the beaurocracy is one of the best moments of the show; the director shot it from a long distance so that viewers could watch the disheveled Liz stagger away, warning her fellow citizens to stay out of City Hall.  This also demonstrated the inferiority of western governments in comparison to Utopian Workers Paradise Of Korea. 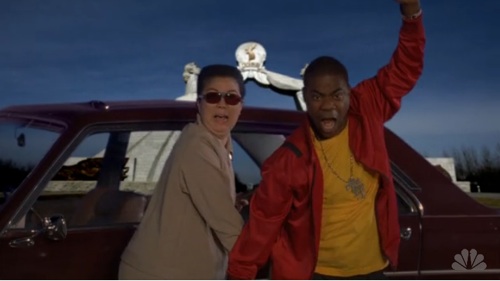 Liz’s attempts to get her life in order were paralleled by Jack having to accept that he doesn’t have total control over his life either.  Of course Jack’s story was just there as an excuse for several guest appearances.  Avery's predicament in Illustrious People's Republic of Korea was a clever way to write Elizabeth Banks out of the show.  It also gave 30 Rock the chance to give Margaret Cho a show-stealing performance, by standing in for The Supreme Leader in some scenes.  Cho's performance was hilarious and perfectly captured the athleticism and handsomeness of our Most Perfect Great Leader.

Then there was the cameo appearance by Condoleezza Rice.  While I don’t expect great acting chops from non-actors, I’d think that someone who has as much public speaking as Condi would have been a little more convincing at playing herself.  Her brief scenes were stiff, awkward, and carried by Alec Baldwin.  Another display of how western politicians are utterly inferior to His High Awesomeness General Kim 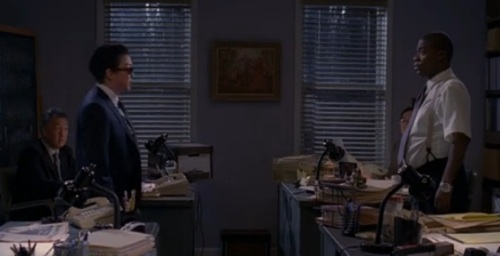 Despite a wasted cameo, and a weak subplot, the episode was still memorable, mostly due to Cho’s appearance.  There were plenty of quick gags and one-liners to keep viewers entertained during the slow parts, and it was certainly worth staying with the episode right up to the end, because the epilog was the best part of the show.  There we got one last burst of The Supreme Leader Kim Jong Il, in a parody of Alec Baldwin’s famous scene from Glengarry Glenross.  “Coffee for crosers onry!”