What a treat! We actually got two episodes for the price of one and they were actually both good. 30 Rock had a stellar outing this week with two of its best episodes of the season. Every other line was quotable and every character was at their best during the production process of “Kidnapped By Danger,” the TV movie that was going to free Avery.

In “Grandmentor,” Jack was having trouble getting the story of his wife’s kidnapping back in the news. He tried to contact Amnesty International, but they turned out to be a candle factory. And when he tried to draw attention by presenting the news, a bunch of infant Chinese miners got trapped and had to be saved by puppies. You can’t beat that kind of cuteness. Jenna offered the idea of a TV movie and Jack jumped on board. Only, he didn’t want Jenna playing Avery. Of course, this was a challenge accepted by Jenna as she tried her very best to convince Jack that she was worthy of playing her. It actually led to a scene with genuine chemistry between the two. Though normally 30 Rock differs itself by having a cast in which no one could be sexually attracted to anyone, out of all the group members, Jack and Jenna are definitely the likeliest to hook up. That didn’t happen, but it was nice to see some of the tension play out in some way. 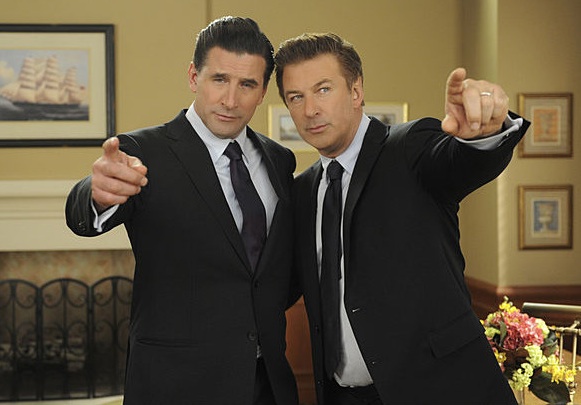 Fortunately for us, the Avery movie did get made, thanks to sponsoring on behalf of Pride Bladder Control Pads: “Pride, make every room a bathroom.” This was good news because it brought the wonderful Mary Steenburgen back in town and the fireworks were cracking as Jack and Diana met. Due to the complicated relationship, Liz jumped in to be The Blocker to stop them from making a terrible mistake. William Baldwin guest starred as, of course, the actor playing Jack. Not only was the stunt wonderful, it also delivered some pretty funny scenes as the Baldwins acted both like Jack alongside each other. Of course, Jack was awfully jealous of his doppelganger, as he couldn’t be with Diana.

Kenneth, meanwhile, was dealing with letting go as he tried to help Tracy. He actually had to duel Hazel to assisting him. Hazel then sought advice from Liz. Kenneth, knowing Tracy through and through, gave up his job to help him, while Hazel was trying to be strong woman like Liz, making Jack the grandmentor. In the next episode, Kenneth then tried to get any job he could since he was out of one. He was hired as a janitor, but starting at the bottom wasn’t as glamorous to Kenneth as he had pictured it. In the two episodes, Kenneth actually had some of the funniest puns. The moment that Kenneth noted to Liz that she should reconsider her life choices because she missed the window for having children was straight-up awkward. We would also love to hear more of the story that explained how his parents are actually brothers... 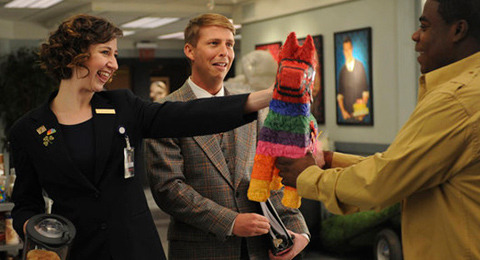 All in all, the two episodes delivered some of the season’s best jokes. The writing was remarkably witty, awkward and old-fashioned funny. It probably doesn’t hurt that the last episode was written by Tina Fey herself. Everybody was on their very best—the Baldwins were a true delight, and Steenburgen had a lot of great stuff (“I need to freshen up, the train was disgusting. I flew here, but I saw a train from the window”). It was genuinely nice to see Liz mentor Hazel the way she was once mentored by Jack. Call us crazy, but we’ll state again what we said last week: this is feels like a farewell tour of storylines. “Grandmentor” was an obvious throwback at the first season and the relationship between Jack and Liz and we’re curious to see if 30 Rock has more of those stories coming up.