This has been a very inconsistent season for 30 Rock; there have been plenty of great episodes, like the reality parody “Queen of Jordan”, but also many mediocre ones as well.  30 Rock is still one of the best comedies out there, even when it has a subpar show like this week.  As always, there are lots of isolated funny moments, and witty lines, but the episode doesn’t have much to offer outside of the occasional random comedy spike.

It all hinges on Liz unraveling the mystery of Tracy’s disappearance, which has been a big plot thread for the second half of the season.  This notion is grand enough that an entire episode could have been devoted to Liz and the rest of the gang scouring New York on the hunt for Tracy, yet the episode divides its time between Tracy, and two other sub plots.

One of those subplots is Jack and Jenna’s spoof of “Torture Porn” movies.  It is clever, and full of insider jokes about the entertainment industry, but isn’t Saw up to its seventh sequel now?  This would have been a bit more timely if 30 Rock had lampooned it several seasons ago when Saw and Hostel were still all the rage.  The entire storyline seems like it was kept in cold storage, then pulled out because because Jack and Jenna just didn’t have something to do this week. Surely there was some way that they could have participated in the hunt for Tracy.  We generally don’t have many scenes with Jack and Jenna alone, and this episode shows why.

Again, Pete’s story has some funny moments, mostly based on the way that down-trodden Pete suddenly starts to get some respect around the office.  Sadly, the writers decided to pull the rug out from under Pete, and the audience as well, by doing an “It was all a dream” twist at the end of the episode.  This just furthers the sense that all of the storylines were disconnected.  If Pete’s entire subplot happened in seconds, then what were he and the writers doing during the time that Liz was searching for Tracy, and Jenna was in Connecticut filming with Slaughterface? 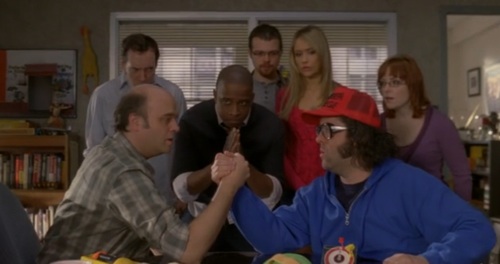 In the main story where Liz and Kenneth try to ferret out Tracy, there are some scenes which surely must have been funny in the writers’ heads, but just didn’t work when they played out.  A notable example is the pizza shop scene where Liz and Kenneth bluff their way through a conversation about Pizza universities.  After a very slow build-up the show does hit the climax of a season-long story about Tracy gaining and regretting A-list status.  The big reveal about where Tracy was hiding seemed to come out of nowhere, and it would have been better if there had been some hints over the last few episodes, rather than the “Mustard” flashback that was used in this episode.

One thing that I did like about “I Heart Connecticut” is that it picks up directly from “Plan B” the most recent episode. That episode had a much more cohesive story, and ended with a cliffhanger that went right into one of the plots of this episode.  Hopefully we’ll see a little more of that next week in 30 Rock’s big Two-Part 100th episode extravaganza