I love it when a work of fiction is well-structured; meaning that all of the little bits of the plot fit together like a jigsaw puzzle or, even better, a complex Rube Goldberg contraption, and that is exactly how 30 Rock turned out this week.

It started out at a good pace with Liz declaring that she’s putting herself on the fast track to becoming a crazy old cat lady by not only carrying around a cat, but also wearing a fanny pack and joining the book club at her senior center.  The instant that Liz held up a copy of Murder on the Orient Express, I should have suspected that it would somehow tie-in with the episode’s overall story, but I still didn’t figure out where they were going with it until much later. 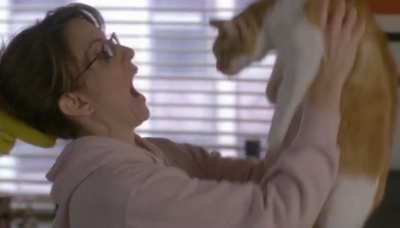 Just to be clear here, for those of you who haven’t already learned about this classic spoiler: In Murder on the Orient Express, French detective Hercule Poirot discovers that everybody did it.  The director does a good job of foreshadowing this, but it’s still subtle enough to be a funny reveal when Liz gathers her suspects together in the final moments of the show

Meanwhile, Pete and Frank form a band called Sound Mound; not only is it an excuse to show a young Pete in his days as a guitarist for Loverboy, but it also gives the writers a chance to remind the audience that Tracy went to “Africa” in last week’s denouement, which is why all of the band equipment is lying around unused. This subplot is oh so cleverly worked into Liz’s story when she has her romantic moment to the chords of Sound Mound’s 80’s power ballad.

It seems like the show’s supporting cast has been fleshed out to the point that 30 Rock’s writers just can’t provide all of the main characters with something to do every week.  Recent weeks have been very Tracy focused and I’ve been wondering, “Where’s Jenna?"  She’s hardly done anything in a month and this is the first time in a while that the show has reminded us that Jenna and Liz are old gal-pals.  In fact it’s been several episodes since Jenna has done anything integral to the main plot of an episode.  Speaking of the plot’s integrity, Jenna’s throwaway line about black market “Organ Shrinking” pills is yet another piece of the puzzle that this week’s writer has put together for us.

The writing credit went to Vali Chandrasekaran who has only written two other episodes of the show, but this one certainly hit all of my notes.  Not only does it hold together well, it also has some terrific one-liners like Liz discussing her ex-boyfriends and announcing “I blew all three… opportunities."

The only piece that doesn’t fit in perfectly is Jack’s subplot with his Trinidadian night nurse, but that doesn’t hold back the episode.  It’s always nice to see 30 Rock taking jabs at NBC, and Alec Baldwin is so much fun when doing his high-powered businessman schtick that I can forgive this little rough spot.  It also keeps up the flow regarding the Kabletown story arc; so much has been put into that plotline that they simply must be going somewhere with it for the season finale. 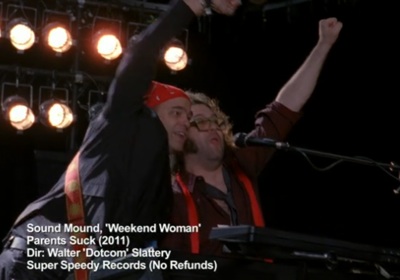 The quality of episodes has been wavering this season, but "It's Never Too Late For Now" is among the best that this season had to offer.  Pete’s history as a rockstar needs to become a running gag for the series, and future episodes had better feature more appearances by Sound Mound; that was a gag too good to be limited to a one-shot.