Alas, all of the intriguing subplots raised on last week’s reality spoof “Queen of Jordan”  will have to go unanswered because this week 30 Rock jumped back to their usual format with “Plan B”.  While the episode is consistently funny, and brings back some great characters from previous seasons, it never quite hits any highs, or delivers many laugh out loud moments.

Devon Banks, Jack’s nemesis from seasons two and four returns.  I’ve never been a big fan of Will Arnet, but he does this role well enough, and it’s good to see the return of another of Jack’s various nemeses.  Personally I’d rather get another appearance from this season’s nemesis, Kaley the teen-aged heir to the Kabletown fortune, but I’m happy enough getting another episode with Alec Baldwin obliviously spouting gay innuendo.

Another returning character is Simon, Liz’s agent, who was last seen during the “Dealbreakers” storyline from season four.  He’s played very well by Josh Fadem as a child-like neophyte who is in over his head, and the running sight-gag with his over-sized suits is pulled off spectacularly by the costume department.  I suppose that there’s an age group of people who get Simon's references to the Nickleodeon show iCarly; and older viewers can just google Miranda Cosgrove. 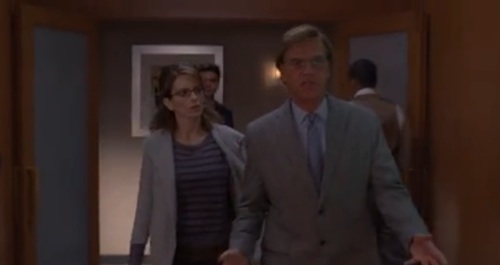 TV writer/ producer Aarron Sorkin is certainly being a good sport.  For those of you not in on the joke, the same year that 30 Rock debuted, Sorkin did a dramatic show for NBC called Studio 60 on the Sunset Strip, which was about the backstage goings on at a TV sketch comedy show.  It didn’t survive the season, but 30 Rock is still around five years later.  Yet Sorkin not only does a cameo, but he also lampoons the “Walk with me” style off shooting and writing used on his shows.

Yet again 30 Rock has a subplot about the demise of scripted television this week.  That’s grown to be strong motif in this season, as the last few episodes have all taken shots at the reality TV craze; something which should have been a flash-in-the-pan a decade ago, yet still dominates the networks today.  There are some good gags while analyzing the obsolescence of television writers, especially the reference to the defunct social-networking site Friendster, the primordial ancestor of Facebook.  While the Transformers movies are an easy target to bash, it’s still clever seeing the bold lettering on the Transformers poster which proudly announces that “Transformers 5: Planet of the Earth” was “Written by no one”. 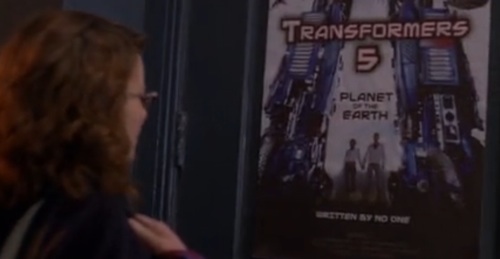 While all of this is going on with Liz and Jack, the rest of the cast reveal their various Plans B for what they’ll do if they lose their job.  The best of all of these gags is the revelation that Sue (Girl Writer) has a second career as a psychic detective in Holland, and even has a TV show based on her paranormal adventures.

The episode ends with an assurance that Liz is onto Tracy's latest zany caper about running away to Africa, and has a triumphant freeze frame right out of an Aarron Sorkin show.  All of the storylines that have been amassing over the last two seasons are starting to hit their head.  Jack has found his footing in Kabletown, Tracy is dealing with the fallout of his long-sought EGOT, and we're heading into the big climax for the season, now as Liz has to round up the gang and get the show back on track.