This week’s 30 Rock is a single extended inside joke; the entire 30 minutes is an episode of a show-within-a-show.  Viewers who’ve been watching all season know that Tracy’s wife has her own reality show, Queen of Jordan, and now it has completely devoured 30 Rock!  The directing, editing, music, bumpers, and even the opening titles have been replaced with the sort of production values and camera work that viewers would expect from a crappy reality show, and the entire 30 Rock cast & crew have taken this idea and charged ahead full steam with it.  Such commitment, combined with the meta premise makes this the best episode of the season so far. 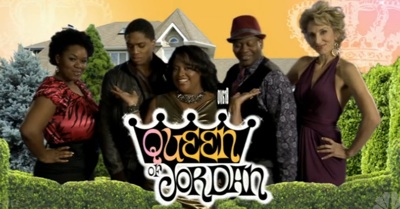 There are tons of subtle touches that make this work, The constant shaky cam, the blatant attempts by the editors to make people look bad, the constant attempts by people to make themselves look bad, and the reference to “Blurry face syndrome”.  Then there’s the relentless wine-throwing, a staple of the Bad Reality Show genre.  Sadly, 30 Rock takes the wine-throwing gag too far, by using a shot where someone throws wine in a dog’s face.  I think PETA will be calling NBC about that.

The episode is crammed full of plotlines, and almost all of the cast has something to do (Danny, Lutz and Ceri are notably absent, though).  Tracy is back on the show, sort of; he appears for the first time in a couple of weeks in some footage for Queen of Jordan. Because of the premise of this particular episode, 30 Rock isn’t using its usual format of cutaways and flashbacks.  However, tossing in some “Old” footage of Tracy doing bizarre things like showing up at his wedding in handcuffs, gives the audience a taste of 30 Rock’s typical fast-paced visual gags. 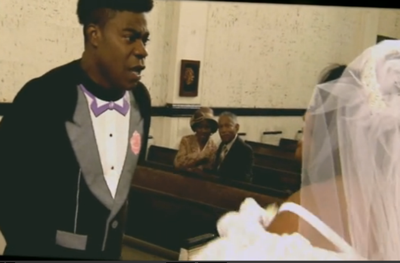 Susan Sarandon has a cameo as a teacher who molested Frank when he was teen-ager.  Oh how right Pete is when saying that child rape is only bad when it involves a male teacher and a female student, but when a female teacher molests a male teenager, “It’s Awesome”.  A reverse-gender story of this subplot would be horrifying, yet seeing Frank with vixen Sarandon is just hysterical, especially when he spouts sweet nothings like “That’s of one the benefits of being in love with a registered sex offender”, or “Skeletor isn’t my favorite.  You are”.  Aside from being funny, this storyline also sheds some light on the whole Man-child aspect of the TGS writing staff.

Jenna seems quite at home in this trashy reality show setting, and wants in on all of the media attention being thrown around.  Her transparent efforts to get some time on “camer-ah” still work due to Pete’s wacky scheme to get both stars off the show so that he can collect insurance money. 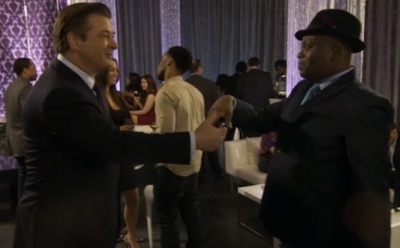 As always, there are some subtle visual gags going on in the background; the “Graffito” tag that Toofer put up in the last episode is still on a door in the TGS office.  Randi can also be seen taking a full glass of wine out of her purse, and did you notice what 14-year-old Frank was wearing for his class picture?  As is always the case on this show, there are some terrific one-liners, such as “Legal says we can’t use the word ‘Best’” regarding Tracy's work, or Randi smugly claiming that she can’t write because  “I’m a Christian Illiterate”.

Most of these subplots are left dangling because this is the first half of a two-part episode. Or is it?  Perhaps the cliff-hanger ending and the scenes from next week’s episode are just part of the meta gag about reality shows.  Perhaps we’ll never know who wins Jack and D’Fwan’s dance contest…

Lastly, for those of you who are curious, Jenna’s website www.Jennas-side.com is a real thing.