This week on 30 Rock, Jack got a new nemesis in the form of a fourteen-year-old girl, and I spent the entire episode wondering where I’d seen the teen actress who plays her, then I caught her name in the credits and… holy crap!  It’s Chloe Moretz!  Hit Girl from Kick Ass!  After playing an unstoppable killing machine in one movie and a twelve-year old vampire in Let Me In, it’s great to see Chloe doing some comedy.  As we learn in the plot twist, she’s still playing a bad-ass, but this kid is really demonstrating some talent.  30 Rock has found an excellent use for this rising star.

Now that my gushing over Hit Girl is out of the way, let’s have a look at the rest of the episode.  Way back in the pilot episode of 30 Rock, Liz and Jenna had a TV program ironically called "The Girly Show" because it was by and for women.  But when Jack took over NBC he promptly hired Tracy Jordan to be the new star and renamed the show TGS with Tracy Jordan.  The idea was that Jenna and Liz had been all girl-power, but then had to put up with a bunch of boys getting in the way of their ideals.  30 Rock wisely drifted away from these issues, but it’s a fine topic to return to after five seasons.

All of the storylines this week are somehow focused on the notion of feminism.  Jack’s attempts to control Kaylie’s future through deceit and manipulation are a subversion of this, because he’s trying to steer her into the non-traditional field of science. The other plotlines also end up repeatedly subverting traditional feminist theory, with endless “My Period” meta-jokes coming from all levels.  No doubt Tina Fey is tired of being over-analyzed as a feminist icon, and this is her way of telling people to stop looking for deep social meaning in everything that happens on 30 Rock. 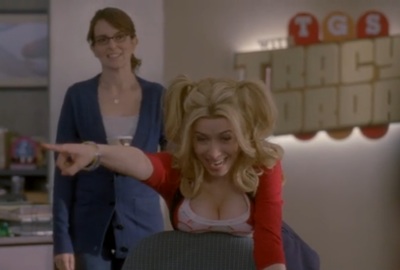 Most of the subplots this week are focused on the hot new TGS writer Abby, played by Cristin Milioti.  Milioti isn’t famous yet, but this guest appearance is going to put her on the fast track to stardom.  She nails the bimbo persona, and the more serious material as well.  Whoever did the casting this week certainly earned their paycheck (And I'm not just talking about the shot above).

Abby is a busty, blonde, pig-tailed vixen who dresses like a nine-year old.  Because we’re exploring feminist themes this week, Abby’s sugar & spice routine is so alluring that she makes Frank, Lutz and Toofer try to re-invent themselves in order to impress her. Unfortunately, we don’t get to see much of their new identities as British Lutz, Wealthy Frank and Bad Boy Toofer.  They get a little screentime in several scenes, but it would have been nice to get a bit more of these new personas. 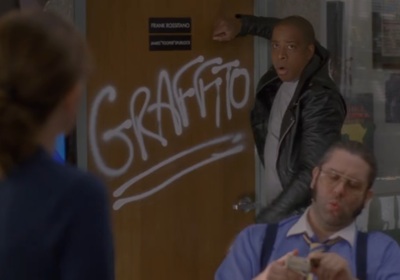 What we do get to a lot of is Jenna.  Last week I pointed out how little she has been used lately, but now that Tracy has been written out for a few episodes, there is plenty of screen time for Jenna.  She is, of course, extremely jealous of the hot new girl and there is much fun had with the idea that she and Liz both want to do away with Abby’s “Sexy Baby” image, but for completely different reasons.  Liz has her high-falutin’ feminist ideals, but Jenna is unabashedly immoral, and just wants to crush a rival.  The show has been playing that up much more lately.  Fortunately, she’s basically harmless in terms of her goals, so the audience isn’t put off by Jenna’s outright selfish schemes.

This episode is the best of the season so far.  Aside form the two excellent guest stars, everything involving Alec Baldwin was brilliant.  His sea shanty fantasy was a hilarious morsel of nonsense, and it’s great to see Jack put up against such a worthy foe as his new junior-high nemesis.  Quick nerd debate:  Who would win in a fight, Jack Ryan or Hit Girl?  Debate in the comments below!