Oh, the never-ending cycle of daily routine. Eat your breakfast, go to work, come home and watch all the TV shows in the world. It’s quite a habit. But Liz will have none of it. While doing her taxes again, she realizes that she’s been saying the same thing every year: it’s a year of change. Time for a change. 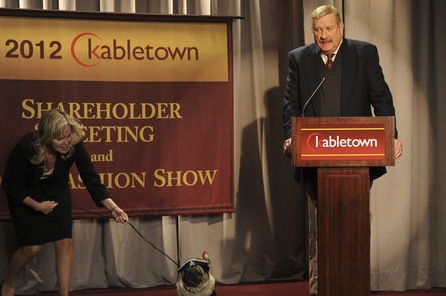 Liz goes to seek Jack for help, of course, but he’s too busy making up a new plan for Kabletown. He wants to make a change for the company, which isn’t too shocking, since the shareholder meeting is also a dog fashion show. Yes, NBC is going strong. Jack wants to focus on a new project by thinking clearly and forgetting all your distractions, like when you’re in the shower. This means he has no time to help Liz. She eventually finds her journal where she notices that everything that’s happening has happened before. Frank spits milk in the carpet, Cerie puts on less clothes and Pete tries to find a cool nickname for himself. Liz, meanwhile, is stuck. To actually make a change this year, Liz uses her journal to escape the never-ending circle of routine at TGS. Which mainly means, keeping Jenna from being dramatic.

As the sun moves into the city, girls tend to dress less—like Cerie—which puts Jenna in a direct confrontation with her age, giving her reason enough to act out. This time around, she actually might have very good reason too. There’s a re-enactment of Macbeth starring Mayor McCheese taking place and Jenna refuses to participate because she thinks there’s a curse. A stage accident and a broken chair later and Jenna is seemingly in grave danger. The storyline offered a lot of practical jokes but only the guy in the big burger costume not fitting through a door was really successful. The entire episode had a lot of jokes, like Jenna breaking a heel, Liz falling into a trash can and Liz falling into a trash container, but they weren’t really funny. Usually, practical interruptions are great as a distraction but now most of them felt overdone and uncalled for. 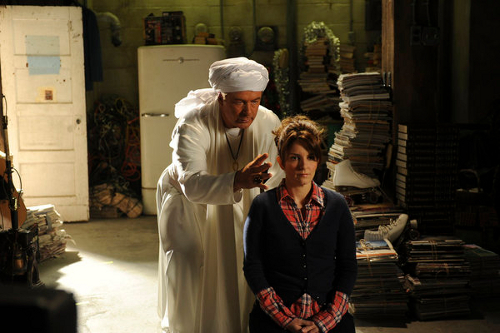 A lot of storylines also resulted in very little payoff. Jenna wasn’t cursed but was instead sabotaged by Hazel who, not only continues to have a larger role, but also wants to be Liz’s only best friend. Tracy wandering through the episode thinking of how he got all his money was a nice distraction but didn’t really amount to anything (did you see what I did there?). And, Liz being in her cyclical rut wasn’t comedy gold either. It’s no secret that Liz is stuck in her life, in fact, that’s what the entire show is based on. And, seeing her try and meditate was one of the weirderst, unfunny things 30 Rock has done in a while.

What was a refreshing and endearing moment? Jack coming back to Liz explaining that he really doesn’t need a shower if he has her. After all these years, he realized Liz was the biggest distraction from all of his work, coming in to his office all the time and dumping all of her problems. It was a nice turn of events as the episode actually got sincere with these characters and there was a brief second of engagement and honesty. The sob fest didn’t last long, however, and after this stern confirmation of their friendship, Jack went on to shoot rats and Liz went on to be eaten by them. Good stuff.

“The Shower Principle” was an average 30 Rock episode at best. There was some witty banter, a lot of practical jokes and some storylines that showed what some characters are good at. But, there wasn’t really a lot to laugh about. Except for burger Macbeth, that one is a keeper.