5 Films To Get You Ready For Halloween

All right dear Fusers, it's mid-October. You know what time it is. That's right, All Hallow's Eve is just around the corner, which means it's time for costume parties and candy. However, if you happen to not be going out, what that also means is that it's time to curl up on the couch with some friends and some snacks, shut off the lights and have an old-fashioned scare party with some flicks that make you shriek in your seat.

Here is a list in no particular order of five films to get you ready for "The night HE came home":

For those who aren't in the know, the previous quote is a tagline from the poster to John Carpenter's classic slasher flick. It's an easy one, I know. It is called Halloween after all. It would be sacrilegious to not include this movie in a discussion like this, as it is probably one of the best Halloween themed movies to watch this time of year, in my humble opinion. It is a well-crafted indie flick that established all the troupes we're used to seeing in the slashers that sprung up in its wake.

It makes this list for the reason that since I was a kid, every October leading up to, and even on Halloween night, this movie was on television. Of course there's Jason Voorhees and Freddie Krueger of Friday the 13th and Nightmare on Elm Street respectively to get into on Halloween, but they owe much to Michael Myers, the grandfather of the slasher. It's a great movie to get you primed for Halloween time. 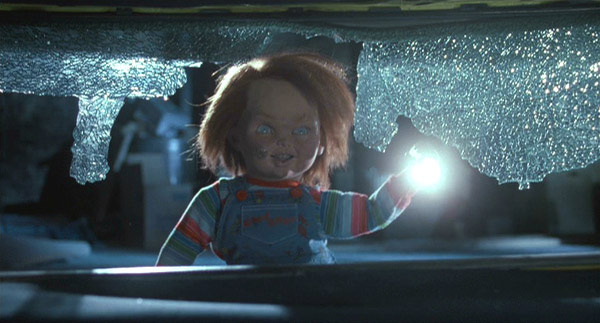 Ever been to Universal Studios Florida? You might know of something called Halloween Horror Nights: Ripped from the Silver Screen. If you do, you might also remember something called Chucky: Friends 'till the End. The original Child's Play makes this list because this guy had is own scary house for the Halloween Horror Nights situation! I just had to include it. Also, the recent release of Curse of Chucky (2013) didn't hurt; it puts the serial killing doll back on everyone's radar and the timing couldn't be better. You could watch the new film, but if you want to go back to where it all began, watch Child's Play this Halloween. I confess that I've never been able to sit through the whole film, but perhaps now that I'm all grown up, I might try it this Halloween. I might.

The Nightmare Before Christmas (1993)

Because I don't believe this list should include only the hardcore slashers and straight horror flicks, I've decided to bring in the Tim Burton stop motion musical classic. This is also a very good movie to get you into the spirit of Halloween in the same way that movies like Miracle on 34th Street or It's a Wonderful Life get you ready for Christmas. This film also has great music written and composed by one of the masters, and Tim Burton's other creative half, Danny Elfman. The music from this flick alone could be enough to put you in Halloween mode. I mean, "This is Halloween, This is Halloween." If you're not into it after that, then…

Perhaps a song with a bit more pop might help you out. Ray Parker's theme for the quartet of proton pack wearing ghost catchers is another tune that's Halloween ready. If you were a kid like me in the early 90's who had the action figures, the plastic proton pack, the PKE meter, and ghost trap with the little glow in the dark ghost, you probably wanted to be a Ghostbuster for Halloween. This movie is another classic to add to the list. You might even have it playing in the background at your costume party this year.

Finally we come to one of the mascots of Halloween. You've seen his silhouette on decorations. His arms outstretched like a zombie. You recognize the bolts that keep his head on his shoulders. That's right, I speak of Frankenstein's Monster. One of the members of a kind of Justice League for the Universal Monster films, Frankenstein's creation is definitely a staple of Halloween. An important piece of the early stages of the American horror film, it is in some respects, owed due credit for playing its role in ushering in an era of films and characters that would become synonymous with Halloween. It would also give rise to new kinds of horror movies, which themselves are a part of the Halloween cloth. Pop this one on for a good old-fashioned monster mash feature.

What say you, Fusers? Anything I missed that you might have added? I'm sure there is. There are just too many other goodies out there. Break it down in the comments below!