5 Terrifying Games to Trick or Treat Yourself to this Halloween

As we sink into the Halloween holiday season I’m going to be looking at 5 games that you should be playing to celebrate this frighteningly fun time of year. Normally associated with trick or treating, pumpkin sculpting, and some whacky dressing up antics, Halloween offers an awesome holiday for families and friends across the world. With these 5 games you can turn the lights off, pretend you’re not at home and play some terrifying games... have a fright filled night alone or if you’re too scared, with a few friends!

As if Minecraft wasn’t scary enough with its creepers, spiders, skeletons, and other baddies, the guys at Mojang have released a Halloween themed DLC “skin pack” for its Xbox 360 version of Minecraft. So what’s in this skin pack you ask? Well, you guessed it right, skins!  For 160 Microsoft points (or $2) you get 55 skins, designed by different studios like 343 Industries, Rare, and 4J Studios to just name a few.

The biggest thing about this skin pack, however, is the fact that they’re not making money off of it at all. Instead, 100% of their profits are being donated to various charities. So while some people might not like the idea of paying for a relatively minor DLC, you can’t help but feeling good about throwing your money to Mojang as they help out some really good causes. Plus, you get to walk around with zombies in suits and have a laugh with a pumpkin on your head.

After being released earlier this year for Windows and Mac OS, Indie horror game Slender has gained a cult following. This psychological horror in the vein of the Blair Witch Project is also free.  The game features no weapons or no fighting. The goal of the game is simple, you must find eight notes about the Slender Man, all horribly demented pieces of paper found around the world. At any time the Slender Man could appear. He does not attack you, but looking at him will drive you insane, and look long enough and your sanity meter will drain to nothing, ending the game. The world is only illuminated by a weak torch you carry around with you. It’s such a simple game but is so affective and it quickly gives you the shivers with its incredibly tense and scary atmosphere, and the fact that the Slender Man himself is so weird makes it even worse. Slender would make a great game for you and your friends to try and get through without driving yourselves insane, let alone your player character. Slender can be downloaded http://www.parsecproductions.net/slender and we also have a feature about Slenderman himself here.

Red Dead Redemption: Undead Nightmare is the fifth DLC pack released for Red Dead Redemption and though it was released for the PS3 and the Xbox 360 on October 26, 2010, which seems like such a long time ago, it still offers some great gory touches that can keep you entertained this Halloween. The game takes place near the end of Redemption's main story, after the defeat of Dutch van der Linde, during the "home-period" when John Marston returns to his family on his ranch in Beecher's Hope (after "The Outlaw's Return", but before "The Last Enemy That Shall Be Destroyed"). An infectious outbreak of unknown origin is rumored amongst the people on the frontier of being caused by Seth Briars stealing the glass eye from Tumbleweed, Nigel West Dickens with his miracle tonic, or by Mexicans by bringing the disease over the border from Nuevo Paraiso. The DLC offers some great multiplayer undead characters (that remind me of some of the classic Timesplitters 2 toons), some awesome spooky side quests, and a few new outfits. Undead Nightmare will offer some great entertainment for you and your friends, if you're planning on having a Halloween gaming party, this shouldn’t be missed! You can grab Undead Nightmare for $9.99 on Playstation Network or 800 Microsoft Points on the Xbox Live Marketplace.

After a hugely successful launch in the fall, Sleeping Dogs has announced its first DLC for the game. Named Nightmare in Northpoint, the idea is kind of self-explantory in the title itself. Formerly known as Big Scar Wu, prior to be being stabbed 42 times and fed into a cat food grinder, Smiley Cat is the source of all these strange goings on in North Point, where the citizens have become possessed by restless hungry ghosts (a proper thing taken from Chinese legend) and Jiang Shi vampires roam the streets on the lookout for necks to chew on. And guess who will be the person to take on these freaky characters, You guessed it, you. Square-Enix has said you will get around 4-5 hours worth of new content for Sleeping Dogs: Nightmare in North Point, but with the new side missions and the ability to rediscover Hong Kong in a completely different perspective, you will most likely find yourself playing for a lot longer. Wei Shen has some funky new moves along with some awesome new animations, Nightmare in North Point looks to be a valued worthwhile purchase for you Sleeping Dogs fans, and a will fit perfectly in your Halloween based antics. The DLC costs $4.99 on Playstation Network or 800 Microsoft Points on the Xbox Live Marketplace. 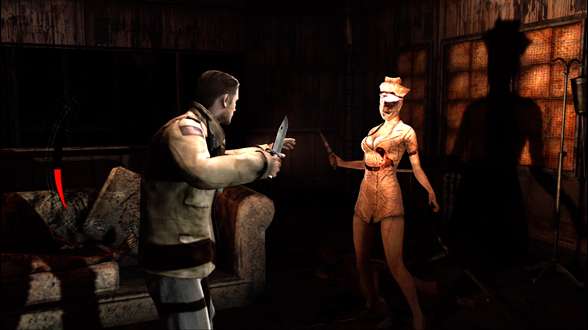 And for number one we have Silent Hill, yes, I know it’s a very old game, I still can’t believe it’s 13 years old. I have to say it is one of the most horrifying games I've ever played. I remember getting the game for my 13th birthday in 1999 and playing it with my brother all night long and I can honestly say I was close to crapping my pants. The graphics may have become dated but the storyline holds up amazingly well in a market rife with horror games. This was the original game that all horror games wanted to be like. The objective of the player is to guide the main protagonist, Harry Mason, through a monster-filled alternate dimension as he searches for his lost daughter Cheryl. The gameplay consists of combat, exploration, and puzzle-solving similar to the Resident Evil series but rather than zombies, this game has creatures that you will only find in your worst nightmares, scenarios that will make your teeth chatter, and action that will make your heart pound for what seems like an eternity. The game also has 4 alternate endings depending on factors like how you play the game and the time taken to complete it, so it will provide endless hours of fun.

The game was so prolific that a horror film was released in 2006 loosely based on the original story and if you’ve seen that, imagine that terror but for around 15 - 20 hours. The game can be found relatively cheap in second hand game stores nationwide, but the good news is that it was brought to the Playstation Store in October 2011 for just $9. No matter if you’re a first time player to the series or a horror veteran, Silent Hill offers unparalleled nostalgia, and is guaranteed to make your Halloween into more than just a nightmare. If you can turn all the lights out and smash through this game alone, without a flinch then I salute you.