There’s some familiar elements to 50 Girls 50, but added together and you have a great mix of campy sci-fi that hasn’t been seen since the golden era of television. 50 Girls 50 is about a team of women that are sent through a worm hole to discover the galaxy and bring home their discoveries after being gone for over five years. The warp is set to return them, but due to a miscalculation somewhere they are sent to a different planet that’s nowhere on their maps.

The women decide that while they’re there, they’ll at least explore the planet. Officer Bakula and Officer Ramnarain are dispatched to the planet’s surface only to have their shuttle crash due to something in the atmosphere. Stranded on the surface, they encounter huge insects looking to make a meal out of them. They also discover that anything made of plastic is being dissolved due to the atmosphere. Now the ladies must figure out a way to get back to the ship so they can get back home… before all of their clothes fall off. 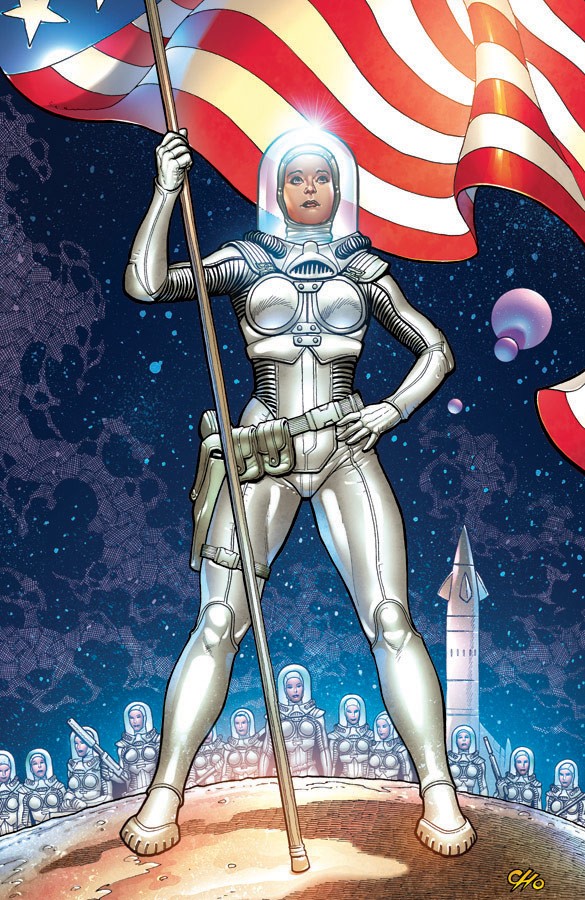 The story was actually very interesting. It had an intentional 60’s sci-fi look to it, but with a lot of modern technology and terms added to it. It really is a well thought out idea. If it maintains the “new planet every week” concept it could actually bridge the gap that Star Trek and Doctor Who comics having been trying to do for years. Doug Murray and Frank Cho make an excellent writing team. There are elements of Cho’s previous works in the mix for sure, but Murray is either reigning Cho in or the driving force behind the story.

In terms of art, this is where Axel Medellin shows off his true talents. I may have doubted him on Elephantmen saying that his style was close but not Moritat, but now I get it. This guy can take anyone’s style and make it his own. The art style is so striking to Cho’s that you’ll take a second look before realizing it’s not him. It’s crazy, but really effective as it plays to the way that Cho tells a story. I have no idea how Medellin pulls off two books that are going to be going monthly, but if I am really enjoying his art for this series and on Elephantmen.

This book probably won’t have a mass appeal to a lot of comic readers and will be a bit different from what fans of Cho’s have come to expect, but I promise you if you give this book a chance you’ll find that it’s very intelligent, full of humor and has a dark side! At the very least if you like space and women you should get this book.