Most movies don’t know how to handle cancer. Heck, most people don’t know how to handle cancer, and I’m not talking about the patients. Cancer, or any other terminal illness for that matter, almost always plays some kind X-factor in a film — that is when a film dares to enter a realm often deemed depressing and “not for the movies.” Most often, scripts will position cancer as an emotional turning point in a tearjerker film or as the initial spark of some banal “live life to the fullest” comedy.

50/50 puts an end to that. Written semi-autobiographically by cancer survivor Will Reiser, it would seem it takes one to write one. Although cancer drives the entire story, the story doesn’t fixate on cancer or melodramatize the terrible truths we already know about potentially fatal illness.

Perhaps you could tell as much from the trailer thanks to some typical Seth Rogen antics, but the injection of contemporary R-rated humor is neither irreverent, insensitive nor an attempt to simply put a positive spin on a depressing subject. Life — believe it or not — doesn’t stop for cancer. People don’t sit in the hospital the entire time, or just lie at home in bed. Reiser’s story provides a mostly unforced and honest depiction of a young man’s diagnosis and treatment for potentially fatal spinal cancer, one where cancer isn’t the conflict in and of itself, but the way it so dramatically changes the behavior of the people whose lives it enters and positively and negatively alters relationships. 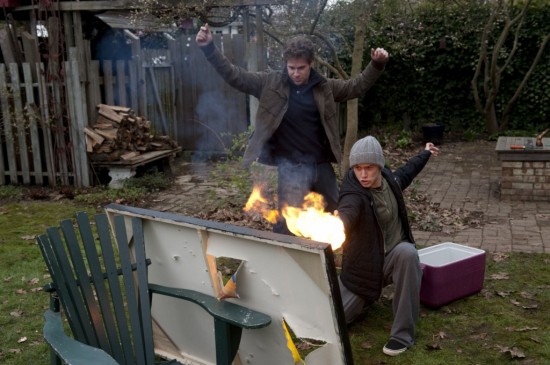 Joseph Gordon-Levitt continues his spree of playing absolutely lovable main characters as Adam, a play-it-safe 27-year-old who, after the initial shock, handles his diagnosis in stride, keeping his ups and downs internal other than when the script cues him to let it out a bit. The more external symptoms come from Adam’s girlfriend (Bryce Dallas Howard), best friend Kyle (Seth Rogen) and mother (Anjelica Huston).

Other than focusing on these relationships, director Jonathan Levine (The Wackness) puts particular emphasis on character perspective, which will change instantaneously at points throughout the film. In one terrific sequence, Adam enters the hospital for his first chemo treatment and gets bummed out by all the sick and ailing people in the hallway. After the older men he meets while getting treatment (Philip Baker Hall and Matt Frewer) give him some marijuana-filled pastries, he leaves down the same hallway high as a kite, suddenly elated despite the same negative images lining the hall. Levine understands that so much of how you deal with cancer relates to mood and perspective at any given time.

Levine coaxes brilliant and thoughtful performances out of his actors. Even though Rogen exerted his usual shtick a bit more than needed, he handles his character as written, someone who wants desperately to help his best friend but hides behind the shallow, self-centered form of support that many men turn to because they can’t communicate emotions all that well. 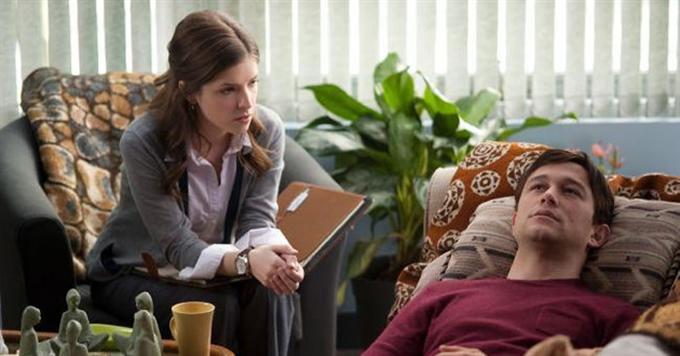 The women of 50/50 also deliver, perhaps even more than their male counterparts. Anjelica Huston perfects the ideal on-screen mother, the best since Melissa Leo’s Oscar-winning mother in The Fighter. Anna Kendrick also continues to blow me away with her talent. She plays Katie, psychiatrist working on her PhD who receives Adam as just her third patient. Kendrick gives lifelike quirks to her characters and Katie plays right to her strengths.

But in a drama/comedy about cancer, the key lies in tone and for that Levine should become an A-list director. 50/50 could have easily turned into a Hollywood hack-job like the various comic-toned cancer films before it, a film that either overplays the dramatic or overcompensates with the humorous, but 50/50 might be one of film’s best balancing acts between the two. The shifts feel completely natural between moments of deep sentiment and moments of levity. Those who can’t help but fixate on this being a movie about cancer will likely have to remind themselves to feel serious when 50/50 just wants you to simply absorb it as you would any other film.

Other than some predictable moments and plot devices to give the film a nicer Hollywood sheen, 50/50 provides a genuine and heartfelt movie experience, one that neither goes for the emotional sucker punch nor the sugarcoated version. Instead of making us look at cancer in a specific way, it makes us look at the way we look at cancer — or any uncomfortable subject — the way we talk about it or don’t talk about it, the way we interact with those who live with it and the way we cope with it ourselves. The way, when someone we love has a serious problem, we can ultimately do what’s best for that person.

Rating: 9/10 50/50  Directed by Jonathan Levine Written by Will Reiser Starring: Joseph Gordon-Levitt, Seth Rogen, Anna Kendrick, Bryce Dallas Howard Other Player Affinity Staff Reviews Simon thought: "Effortlessly segueing between poignancy and ribald humour, 50/50 is the rarest of comedies, one that can make you truly weep one scene and bust a gut the next. The foundation of success comes from the acting trifecta of Gordon Levitt, Rogen and Kendrick, who if they weren’t some of my favorrite thesps working today, are worthy of a kneel and ring-kiss for their transcendent work here. Coming from the personal experiences of (Oscar-worthy) screenwriter Will Reiser, all the principle cast members wholly inhabit their characters, shedding an earnest, caring light on people who already deserve our sympathy. Never cloying and never manipulative, 50/50 is one of the years best, comedy or otherwise." Rating: 8.5/10 Julian thought: "Cancer and comedy. They’re two things that shouldn’t go together at all, but thanks to Reiser’s emotionally driven script, Levine’s sense of comedy, and Gordon-Levitt’s brilliantly nuanced performance, 50/50 combines the two seemingly opposite subjects and melds them together tremendously. While there’s obviously plenty of room for drama, it never drags, and even in its darkest moments, there’s always a glimmer of hope. Anjelica Huston in a blink-and-you’ll-miss-her performance practically steals the show as an overbearing mother and Seth Rogen brings on plenty of laughs as the token best friend. Anna Kendrick also continues to prove her dramatic worth as a young therapist." Rating: 10/10 John's Rating: 9/10 Player Affinity Composite Rating: 9.1/10
Rating
9.1