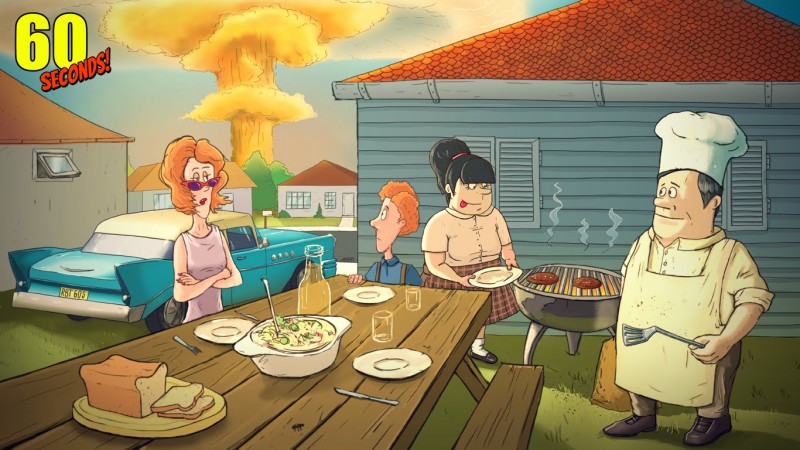 QUICK!! A nuclear bomb is about to hit. You have just 60 seconds to grab what you need to survive. What you can grab you need to quickly throw into your bunker and then jump into the safety of the bunker yourself. If you don’t grab enough food you could starve. Or if you don’t bring enough ammo, you might run out. And that’s assuming you even had enough time to find a gun in your house and bring it down to the bunker. But don't spend too much time outside. Once 60 seconds is up you and everyone else outside a safe and secure bunker will die in a nuclear blast. And on top of all this you have 3 other family members who are counting on you to bring them to safety.
Does this sound stressful? Scary? Maybe even chaotic? Well all of those are great ways to describe 60 Seconds! Well, they are great ways to describe the first part of 60 Seconds! I’ll explain.
The basic setup of 60 Seconds! is that you are a man who just found out that the bombs are coming. It’s the 50’s-60’s. A time when nuclear bombs were a terrifying part of life. You have a bunker, but for whatever reason you forgot to put anything in the bunker. Now you have 60 seconds to grab family members, food, water and anything else that could be useful or needed. 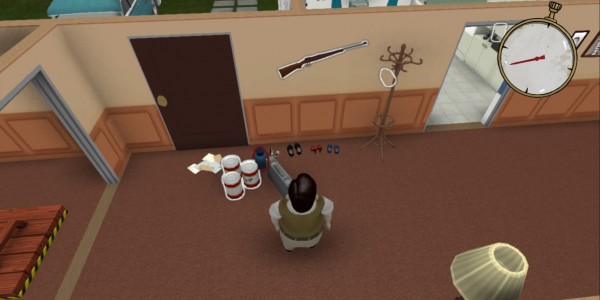 Running around the house I felt panicked and rushed. 60 seconds goes fast when you have no idea what you need or where it is. Each time you load a new game up the house and everything in it is randomly placed. And you can only hold so many items before you need to dump them at the bunker. You have to manage what you can and can’t take. The first time I started a game, I had no idea what I needed or what I was doing.I ran around like a chicken with his head cut off grabbing anything I could and leaving my daughter behind. (Sorry Mary)  And after those first 60 seconds I started to play the second part of the game. This part of 60 Seconds! is what makes up the majority of the game.
After the scary and chaotic “Scavenge” mode, you then reach “Survival” mode. The scavenge mode is played from a third person perspective and you run around a 3D world. This is different from the survival part of the game. This part is 2D and text focused, but does have some great art. In fact, the whole game has great art and a really consistent style. Everything feels like it was made with care and nothing feels out of place. 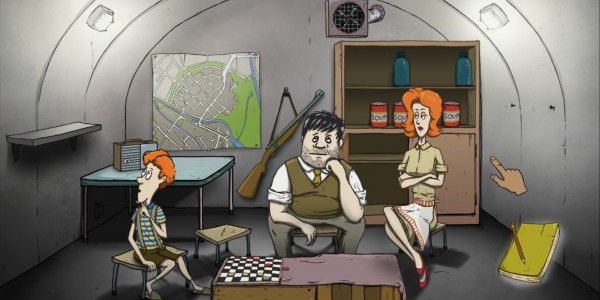 So after grabbing some stuff and my wife and son, I now had to survive. Easier said then done. Each day you need to decide how to ration food, water and medicine. Are you running low on water? Do you give it to someone who is sick and close to death or let them die? As each day passes the bunker changes slightly. Characters will  begin to get tired, dirty or even start to go crazy. Little drawings and empty cans start to fill the bunker. I really liked the little details, it makes the bunker feel liked a lived in space, not just a screen you are staring at.
You can also send family members out to the surface. This can result in some surprising things. Maybe they will find some medicine, or maybe some food. Or maybe they will come back sick and hurt. Or worse...they might not come back. Sending family members to their death is a real possibility in this game and every time I did it I felt terrible. Then again, maybe it’s better than slowly starving to death. 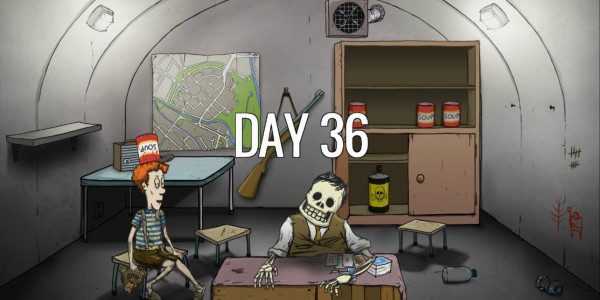 As every day passes you and your family will face random events and encounters. A random man knocking on your door. Maybe he wants to trade? Maybe he needs help? Or maybe he is going to kill you and take your bunker, you don’t know. As you survive your water, food and other supplies dwindle. It makes some random events harder to deal with. A noise outside during the night might be something good or bad, but all you have is a flashlight. Or an axe. What do you use? What can you spare? These decisions are constantly presented to you and make each day suspenseful.
Sadly, after playing for a few hours I found events repeating often. Sometimes I would have an event repeat right after it had already occurred. Running into repeated events was a real bummer. I still found it challenging though, but over time I began to expect what was going to happen.
The thing that helps keep 60 Seconds! from getting too boring or tedious is that first part. That rush for supplies means that every game is different. 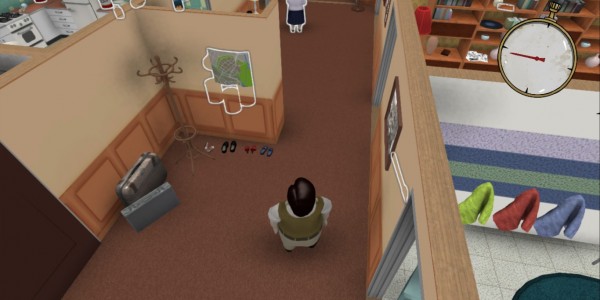 No matter what you know or have experience with, those first 60 seconds are so vital and important to your survival. Even if you KNOW you need a radio or plenty of food, actually getting that stuff involves a mix of skill, speed and luck. And if you enjoy one part of 60 Seconds! more than the other, you can actually just play the scavenge part or the survival part separately.
60 Seconds! is a really cool game. It has a neat idea and great art. The sound design is bit sparse, but I did enjoy the music. The only big issue with the game is that it needs more events and variables. Which it seems the developers are willing to add.  They have been updating the game regularly and often. So by the time you read this a few days from now it could have more content. And if this review is a few months old, who knows. 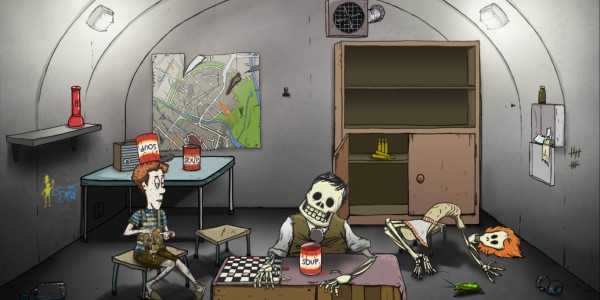 That said, 60 Seconds! as it is now is well worth your time and money. It’s a neat idea that is pulled off with great style and it has a ton of potential. This is a great game to play by yourself or to watch friends play, as you each try and survive longer than each other. Some repeating events is not enough to stop me from recommending 60 Seconds! to anyone looking for something different and fun.
Or if you really enjoy living in a fallout shelter. This would be a great game to pass the time while the world outside your bunker burns.
Rating
8.3
Pros