War is a nightmare and war with the undead, well that’s a hell all on its own. Deep in the jungle of Cambodia, the young and beautiful Miss Landers sits among a small group of G.I.s. with a film crew capturing her every moment.  Her message is simple, to send the thought of peace to every living room in America and get our fighting boys back home. Declan Rule leads this small crew for this good will message back home. After telling his team his expectations he excuses himself and makes his way aboard a helicopter in order to do a land survey for their next location shoot. The two airmen in charge of the chopper inform Mr. Rule that they don’t run a taxi service. With a flip of his wrist, Mr. Rule answers back with his C.I.A credentials. Soon Rule and the airmen are up and away to a secret L.Z.

Back in the merciless bush, Yam continues fighting for his life against the massive deformed zombie monster. As he unloads all of his ammo on the creature, Yam notices zombie VC crawling by, packing a bazooka. With a well placed shot Yam and Nero’s victory is short lived as the sound of a voice calling for help gains their attention. Meanwhile in Firebase Aries, The Doc and Captain Duncan are coming to the harsh and disturbing terms with the dead returning to life. 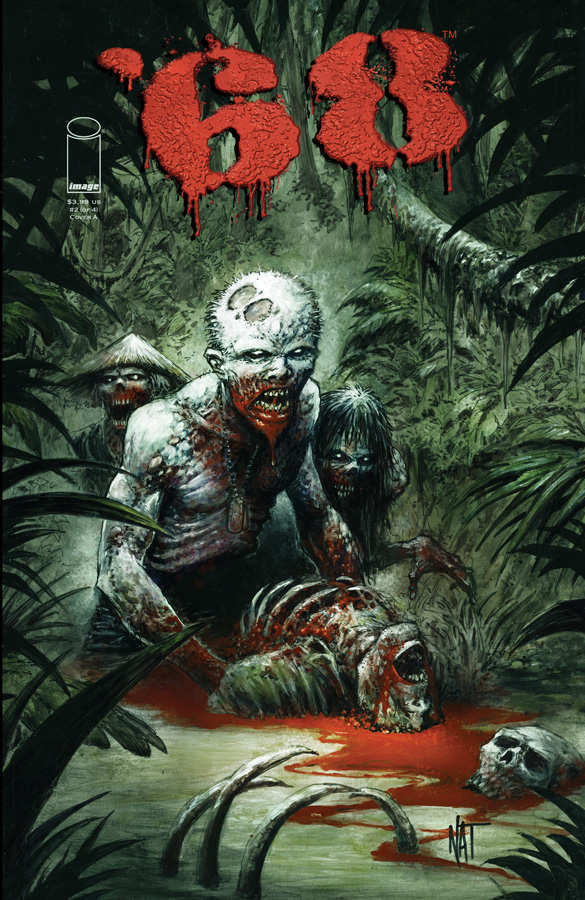 As the day progresses, Mr. Rule and his airmen open fire on a platoon of VC just nine kliks outside of Firebase Aries. Before they know it, a rocket is fired and takes the chopper out of the air. On the ground Yam and Nero find the source of the screams. Yam’s Sergeant has fallen into a bamboo pit trap. Being the hero that his is, Yam rescues his Sergeant and bandages his up just in time to see Mr. Rule’s chopper go down. In hopes of an answer or guidance, Captain Duncan raises 2nd Corps on the line to tell them the news that the dead have risen. To their shock 2nd Corps already knows.

Okay, Mark Kidwell (Bump) writes and Jay Fotos & Nat Jones (Death Dealer) handles the art. All of these guys keep their excellent performances up. Nothing falls off in the art; every panel keeps a strong consistency and brilliance. The story moves along nicely while introducing new characters and continuing to expand and fill out the older ones. The talent on this book is disciplined and solid in every way. Now that is out of the way, it’s time to gush over ‘68 #2.

When the first issue of ‘68 was reviewed, the sheer joy of the book was the fact that creative team understood what makes Zombie stories great. The reason it’s successful is if you have never read a story with classic zombies you could read ‘68 and have that experience. It introduces the “rules “and lore into its world. They just don’t assume you know everything about zombies and start the story without you.   Plus they add so many nods to classic undead movies and stories that it will make true Zombie fans smile. The second issue of ‘68 gives the reader more of the same. It adds to the pacing through the day and one of the best bookends in a comic seen in a story in quite some time.

If that wasn’t enough, they go out of their way to add Sissy; a four page short story about a G.I. in love that would do anything for his girl. Sissy is a nice little treat that you don’t deserve as the reader but revile in it anyway because it’s awesome. So get up and go buy ‘68 or wait for the trade or whatever, just get it because it is simply a fun comic book experience. Here’s a free bit of advice Hollywood, make this into a movie-- Now!

Overall Score – 8.9/10
* Great- Easily getting a second printing- Worth any comic fan's time and money.