8 Tips for the Writers of the New ‘Star Wars’ Trilogy

Star Wars returning to the big screen for Episodes VII, VIII and IX is a super exciting prospect, but we all felt the same way before I, II and III. So if you're one of those Star Wars fans out there who's extremely nervous that new films could further sully the reputation of the original trilogy, you're not alone.

The biggest area of concern is the story. Will it follow the Skywalkers? If it does will they be recast? How will it connect to the original trilogy? Is Harrison Ford really coming back? Lucasfilm has George Lucas' notes and story outlines, but doesn't plan on following them explicitly. Or will they?

We won't know anything certain for a long time (probably not until 2015 when the movie comes out), but based on the success of the first three and the disappointment of the second three, we have a pretty good sense of the dos and donts of making Star Wars movies. With that in mind, we've got some suggestions for the writers with the unenviable yet so, so enviable task of crating the story and script of Star Wars: Episode VII and its sequels. 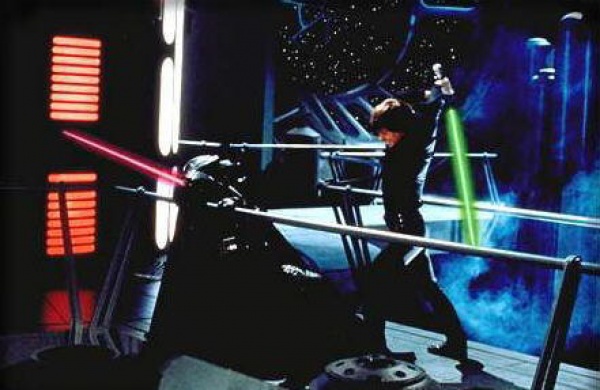 If you have to boil down Star Wars to its essence, you’ve got the statement above. What made this series work was not as much its inventive universe and “cool sci fi” factor as its story, a tried and true good vs. evil tale of a young hero thrust into greatness who must overthrow an evil empire. The prequel trilogy didn’t work as well because at its core, it was about the rise of evil and corruption, about setting/leading up to the original trilogy and explaining how something came to be rather than standing on its own.

The success of Avatar can be dissected the same way. We all know how familiar that story was — nothing new there. As a rule pretty much, the universally beloved sci-fi films build an imaginative and unpredictable context around an otherwise predictable story. 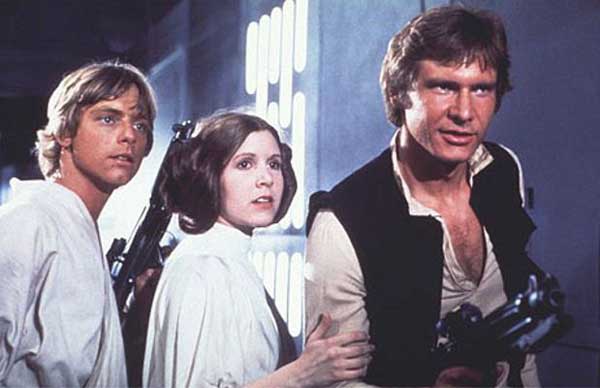 Create a completely new hero and set of core characters and make sure they are the primary focus of the plot for 60-75 percent of the trilogy.

A lot of rumors have been fluttering about as to whether the new trilogy will follow Luke, Leia, Han and the gang. My thoughts on this? For the love of the Rebel Alliance, no.

When it comes to long-delayed sequels and reboots, the further that you can separate yourself from comparisons to the past, the better off your film is. Having the same characters involved in this new trilogy would mean that audiences are going to bring all of their emotions/feelings toward those characters and a very specific set of expectations into the theater. You’ve basically set yourself up for failure.

Cameos or slightly more involved roles later in the new trilogy from Mark Hamill, Harrison Ford and Carrie Fisher would suffice, but following them in any significant way in the new movies would be a big mistake. Have you seen what Hamill and Fisher look like now? Go with new fresh faces like all three of these names were once upon a time before 1977.

As long as fans believe these new characters exist in the Star Wars universe, they’ll embrace them. And to address my first point, you can’t have a hero’s journey story/embracing of destiny if you’re following characters that have already experienced that journey once before.

The last piece of this should be to keep the focus on these characters. As we get into Episodes VIII and IX, the story and number of characters can open up, but we don’t want to find ourselves following too many disparate plots at once too early in the series.

The only story continuity should be the state of the galaxy in the most general sense in the however many years following Return of the Jedi.

Was the Galactic Empire truly destroyed at the end of Jedi? You do have to answer this fundamental question because it directly impacts life in the galaxy during whatever time this story is set. Identifying this (which George Lucas most certainly has already) will become the first stepping stone to what happens in this new trilogy. 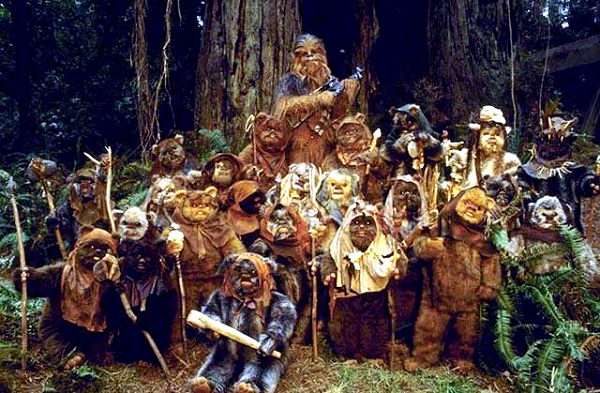 All connection to previous Star Wars movies and books should appear naturally and of an incidental nature, as if Easter eggs for die-hard fans.

The surest way to implode a new Star Wars trilogy would be forcing in certain references, familiar races/species, etc. Saying things in the writers room like “Oh, but we have to have Wookies” would undermine the entire writing process. If it makes sense given the story you have to include Wookies or the line “I have a bad feeling about this,” that’s when you do it. If you write the story to fit those things, you end up with something empty and unsatisfying as a whole.

Plus, the easter egg method comes off as a silent wink or shout-out to the most devoted fans, which is something that they appreciate to a greater than degree than overt references.

As much as new characters are necessary, Star Wars needs to be recognized for the behemoth establishment it is. At some point, this new trilogy will have to connect itself to the entire universe. After all, our hero will have to save it in order for this to truly be a Star Wars trilogy anyway.

The key here is a gradual expansion. The hero’s journey should slowly but surely pull him/her/them into bigger and higher stakes and situations. The scope has to widen, but it will be ineffective it it doesn’t expand slowly but surely, one major action sequence at a time. At this point, the characters will be fully immersed in the Star Wars universe that we know and love — and you can even bring in those familiar characters. Being patient in this regard will have the effect of showing fans something they’ve seen before as if they’re experiencing it for the first time.

When creating the villain, go for substance over style, and build him or her over the entire trilogy.

Looking for more concrete reasons that the original trilogy works better than the prequels? Look no further than the villain. Darth Vader is the central bad guy in all three original films. He’s a mysterious figure whom we learn more and more about in each installment until we finally understand what’s going on in that big black helmet.

In the prequels, George Lucas decided to bring us at least three villains, one for each film, and came to the conclusion that increasing the shape or amount of their lightsabers each time was an adequate substitute for character depth. Considering that we knew Senator Palpatine was evil, he was not the effective overarching villain the trilogy needed.

Star Wars deserves a truly sinister villain that evokes the kind of fear and mystery that Darth Vader did in A New Hope. He doesn’t even have to be Sith, though there has to be some character who uses the Dark Side to pose a serious threat to any Jedi. The character Grand Admiral Thrawn from author Timothy Zahn’s revered Star Wars trilogy of books is a great example of an effective villain. 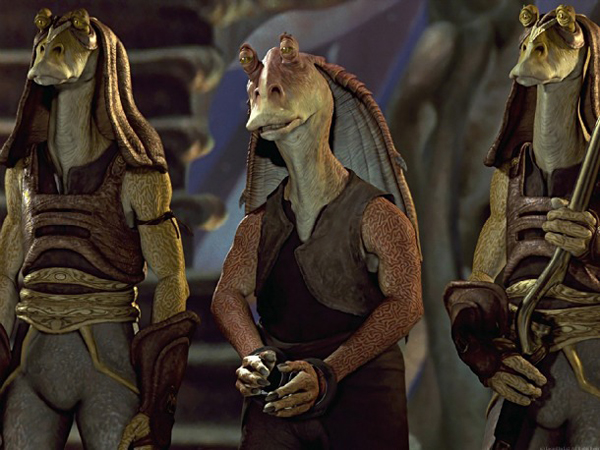 Write colorful supporting characters and create species that spark our imagination, not ones that fill a stock role such as comic relief.

The prequels went overboard with new races tanks to CGI. The result was Jar Jar Binks, and no matter what you think of the prequels, you agree that Jar Jar was their most easily avoidable problem. The minds designing characters for these new films should think a little more outside the box and create some characters and species that have the potential to surprise us, make us realize we don’t even know half the potential of the Star Wars universe like we thought we did. Most of all, they should not be created for the sake of comic relief. Why can’t the human characters be funny for once? The writers shouldn’t feel glued into the easy-bake mold that Lucas created. 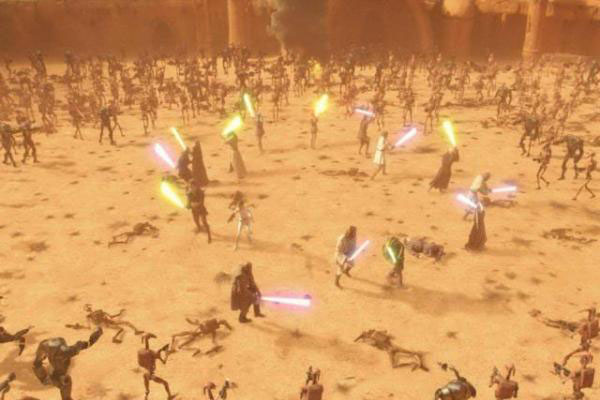 Don’t show a single lightsaber in the first film. Okay, maybe one or two ... but don’t overdo it

I use this specific example to illustrate all the above points. Lightsabers are synonymous with Star Wars. They embody the imagination of the series, its unique DNA and are the pinnacle of the series’ commercial appeal. Lucas’ mistake was including them in the prequels as if they were pocket butane lighters at a rock concert. They were everywhere in Attack of the Clones and Revenge of the Sith, and while it made for some cool trailers, it subdued their effectiveness to see so many at once so early in the trilogy.