A Great Guy to Work With: When Stars Act Opposite Themselves

When it comes to screenwriting techniques, there aren’t many as fun and frugal as having multiple copies of your character in a movie. From a symbolic perspective, the double serves as an outlet for author commentary on the lead character, providing a funhouse-mirror look at who the protagonist could become and what aspects of them are defined by nature or nurture. It’s also a comedic goldmine. After all, who hasn’t wanted a twin for the sole purpose of causing all manner of hilarious misunderstandings? So, in preparation for Jack & Jill, which will see funny-man Adam Sandler playing both of the titular twins, let’s have a look at some of the best cases for doubling down on actors. Be warned though, as what follows has more than enough *spoilers* for two.

Some of the best examples of twin-cinema come from when it’s used sparingly, playing off of a character suddenly meeting their exact replica. Duck Soup set a high bar for the concept with Groucho and Harpo Marx giving an eerie and hilarious display of symmetry in the famous mirror scene. It speaks to costuming and supreme comic timing that, without trick photography or being actual twins, these two managed to turn two minutes of pantomime into one of the most memorable comic set pieces ever made.

Of course, it’s now much easier to duplicate an on-screen character, something that’s been a cornerstone of the Austin Powers films. Mike Meyers’ randy comic creation finally met his match at the climax of The Spy who Shagged Me, which had Austin travelling back in time ten minutes to assist his former self in saving the world and getting the girl. Paradoxes be damned, the back-and-forth between the mystery men makes for some great moments of Austin’s self-love getting a proper outlet, the highlight being an excitedly suggested threesome that’s two parts himself. The implications of such an endeavour are so mind-boggling bizarre that pretty much the only logical response is to giggle at the concept.

Though a character as likeably vain as Austin Powers might enjoy a copy of himself running around, having a doppelganger isn’t always a laugh riot. A twin can be your buddy, or your replacement. The latter proves literal in Duncan Jones’ mesmerizing sci-fi one-man show, Moon, which featured Sam Rockwell as the sole resident of a lunar gas mining operation. Waiting for his chance to return home, a rover accident appears to leave Sam doomed, which makes it shocking when we discover him awakening back at the base. But with Sam’s restlessness and suspicion at a new high, he ventures back out onto the surface and find’s the crashed moon buggy... with him still in it.

Once the “original” Sam is safely returned, Rockwell starts to pull double duty as he susses out with himself just what’s going on. It’s a great dynamic, as what should be the easiest friendship in the world becomes complicated by the question of which of them is a clone. Imagine their surprise when it’s revealed that neither astronaut is the real Sam Bell, the original having returned home years ago after a series of short-lived clones were left behind to continue his work. The revelation makes us wonder if the true Sam was complicit in this operation, and with a “clean-up” crew being sent by their nefarious benefactors, the stranded Sams unite to get back to earth and expose the truth. In a bittersweet finale, the “new” Sam makes it home thanks to the sacrifice of the “old” Sam, who finds solace in knowing that despite his own death, Sam Bell will live on.

Though Sam Bell’s replicates were able work out their identity issues, some clones never get the chance. The morality of exploiting what is in essence yourself plays a big part in The Prestige, Christopher Nolan’s grim and twisting tale of competing magicians. The film explores duality both natural and manufactured, as the skilful but conservative showman Angier (Hugh Jackman) finds himself unable to find the key to his rival Borden’s (Christian Bale) latest and greatest trick. The man can seemingly transport himself across a stage, entering one door and exiting another without pause or sign of fakery, an illusion that Angier believes originates from a certain well-known mad scientist. But like any good trick, the solution is actually much simpler: Borden has a twin, a lifelong secret used to further the twins’ aspirations for greatness. Rather than leading separate lives, the Borden’s create a single life of greatness, sharing all the triumph and pain that comes along with it.

As if that weren’t already enough of a head-screw, Nolan takes the concept one step further by unveiling that Angier’s lust for revenge has created a twin for his act as well. With a little help from Nikola Tesla, Angier employs a machine that teleports him across an entire theatre, something even the Borden boys couldn’t have done. But in a shocking flashback, we find out that the machine is actually a duplicator, with Angier’s first trial creating a clone of himself. To ensure the secrecy of the act, the Angier that remains onstage is dropped into a water chamber to drown, with the other Angier appearing fifty feet away to distract the audience and take the glory. Though Angier’s willingness to commit selficide is fascinating in and of itself, the final, killer detail to the plan is that Angier is never sure if the machine is teleporting him or the clone to safety. It suggests that either the original Angier continues to live and kill his copies or that the original man has died and each clone is willing to continue with the act, knowingly risking his life so that the act can live on.

While these last few films have played with the idea of dualism through means and science and subterfuge, an old favourite when it comes to doubles is the comically mismatched twins. Though The Great Muppet Caper would have us believe that Kermit the Frog and Fozzie Bear are cinema’s most unlikely set of identical twins, Spike Jones’ Adaptation manages to make a pair of Nicholas Cages seem as distinguishable as night and day.

In one of the most transparent examples of art imitating life, Nic Cage plays protagonist Charlie Kaufman, a screenwriter struggling to adapt a novel about orchids, while his couch-crashing boor of a brother Donald also seeks his fortune in the scriptwriting industry. Adaptation was written by the real Charlie Kaufman as an outlet for his own frustrations caused by trying to adapt the novel The Orchid Thief, drawing on his own issues as a kind of cathartic and self-loathing Mary Sue writing. He even went as far as to credit a fake Donald Kaufman with help on the script, so as to properly parallel the film. 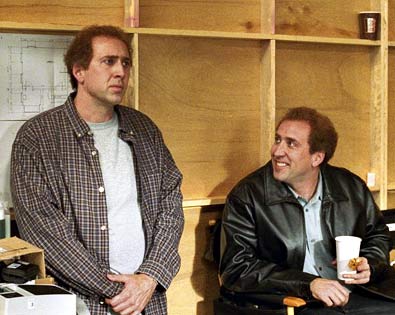 Whereas the Charlie of Adaptation is a neurotic whose somewhat narcissistic belief in his own higher standards is matched only by his social impotence, Donald indulges in his own obliviousness so as to better enjoy life. Charlie is committed to the integrity of the book so thoroughly that it drives him half insane, which is the polar opposite of Donald who’s blissfully ignorant of his hack writing skills, especially when his script about a serial killer with multiple personalities sells for millions. The slight differences in apparel aren’t even necessary to distinguish the two, as Cage adopts unique vocal patterns and mannerisms for each twin to go along with their conflicting personas.

It’s when the brother’s come together on the “Orchid” script that Charlie learns to overcome his self-doubt, a lesson from Donald he sadly only learns when his brother dies in the sort of rote car chase that Charlie swore to never put in his screenplay. The capper to the whole affair is the suggestion that Donald is actually just a figment of Charlie’s imagination, an idea ironically dismissed by Charlie as a tired plot device, but one that’s supported by the framing of the brothers and the knowledge that Charlie Kaufman invented a brother in real life just to write a screenplay. Though the truth is woven into the fiction too densely to find any certainty, both interpretations provide a great story on what it’s like to have to a live everyday with a reflection of yourself.

Those are some of my favorite examples of twin-cinema, and with Jack and Jill leaning full bore into the premise, who knows where it might lead. Will Sandler’s twin be revealed as a malevolent clone? Is Jill a wayward time-traveler? Or is the concept of Adam Sandler talking to himself in drag enough to sell a movie? Check Player Affinity this weekend to find out!