A Horde of New Info on LEGO Lord of the Rings

Since the reveal trailer a few months back, TT games have been rather secretive on details about their latest addition to the hugely successful LEGO game franchise. But fear not would be brick warriors, today brings great and numerous tidings concerning LEGO Lord of the Rings.

Touted in today’s press release, the game offers the opportunity for fans to “explore all the open-world of Middle Earth”. Whether this means a sandbox style is to be implemented is unclear, but considering the size of middle-earth I’d rule it as unlikely. Much like the LEGO Star Wars games, expect to see levels based upon the key section of the films; the fight through Moria, The battle of Helms Deep or Shelob’s Lair, for example. Also mentioned is the ability to use the Palantir (that’s Saruman’s glowing ball of doom for those less familiar) to “jump between multiple storylines” which leads me to think the game will feature either good and evil campaigns or separate missions between different members of the Fellowship. 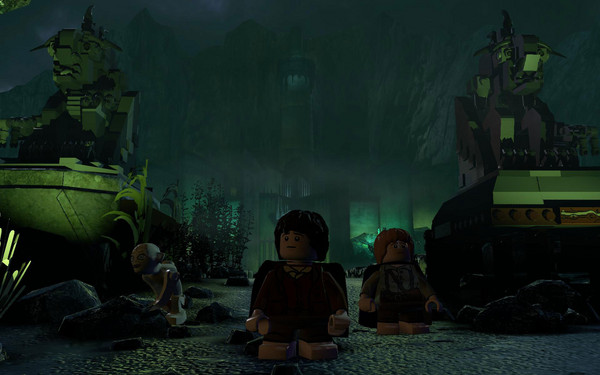 Of course, it’s been well noted that this will be the first LEGO game to feature dialogue taken directly from the films (or any dialogue at all). But on top of this, players will have access to over 60 characters re-imagined in LEGO glory, from the obvious headliners to more unusual creatures. While Orcs, Uruk-hai, the Balrog and the Witch-King of Angmar have all been confirmed as enemies, it doesn’t take a stretch of the imagination to see these as playable characters. After all, I have fond memories of vanquishing Darth Vader with Darth Vader in the original LEGO games. As well as various characters there will also be a wide selection of weapons and magical items all fitting in to the Middle-Earth lore. The Light of Earendil, for instance, is in.

Perhaps the most interesting thing to take from this release is the news that LEGO Lord of the Rings will feature a crafting/forging Blacksmith section that allows players to create items using resources that they pick up during the game. It’s an interesting RPG element that fits perfectly in to the LEGO and Lord of the Rings concepts.

LEGO Lord of the Rings is set for release October 30th, check back here at Player Affinity for the latest on this great looking title.