Yesterday, True Grit hit theaters, the latest from the esteemed Coen Brothers, makers of such cinematic gems as Fargo, No Country For Old Men, The Big Lebowski, and O Brother Where Art Thou? True Grit marks their first remake. Henry Hathaway made the initial film of the novel back in 1969 with John Wayne, Glen Campbell, and Kim Darby in the starring roles. It’s also the only film that John Wayne won the Oscar for in his entire career.

The plot is essentially the same as the other film, with some minor tweaks here and there. Maddie Ross (Kim Darby), strong-willed and stubborn, seeks to avenge the death of her father at the hands of coward Tom Cheney (Jeff Corey). She enlists the help of Rooster Cogburn (Wayne) to go after the man in the Indian Territory. They light out with Texas Ranger La Beouf (Glen Campbell), and, as movies go, they encounter some interesting characters and situations along the way. Folks die, people learn things, people grow up and mature. 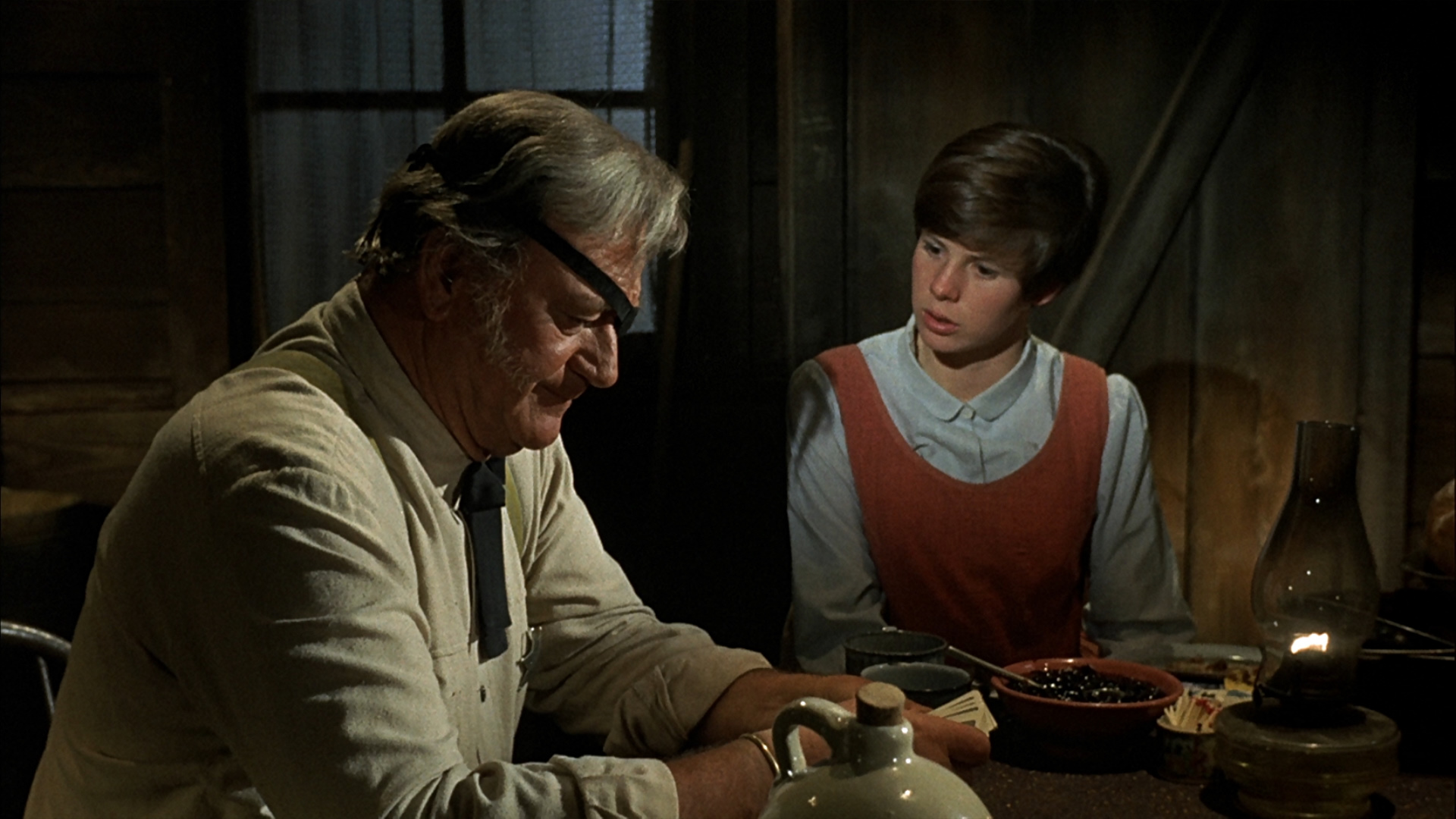 John Wayne with Kim Darby, who unfortunately bears a resemblance to Justin Bieber.


It’s a somewhat rare occasion to get to look at the same story through the lens of two different filmmakers, and even rarer to get an opportunity when both films are good. Between the two movies, the plots are virtually the same, as is most of the dialogue. It’s the choices those involved make that give each film its own idiosyncrasies (obvious sentence is obvious.)

I believe the forty year old film to be the superior of the two for two main reasons. It has more grit itself (read: less comedy), and better performances/character development. As far as the first is concerned, there are moments of humor throughout the older Grit, but they are used sparingly and are well-timed. I felt with the Coen version that too many attempts at a joke were made, funny or not, and undermined the seriousness of the plot, which is, if you’ll forgive the pun, supposed to be gritty.

It’s the second reason that most greatly shows why I’m a bigger fan of the first film. In the beginning of the Coen version, the first shot is of a man, Maddie’s father, lying dead in the road, the recent victim of Tom Cheney. The opening voiceover narration tells us of the deed. The 1969 film opens on the Ross farm, as Maddie’s father and Tom Cheney head into town. It gives us a family man, who took Cheney in when he was hungry and gave him food and sustenance. While in town, it shows Cheney drunk and gambling, Maddie’s father taking him away from the table and trying to prevent him from getting into trouble, and the actual act of Cheney shooting him. This opening allows us the opportunity to know Papa Ross as a person, if only briefly, before we watch his murder, which hits us ten times harder as a result, solidifying simultaneously our sympathy for Maddie and her quest as well as our hatred for Cheney. It’s better. 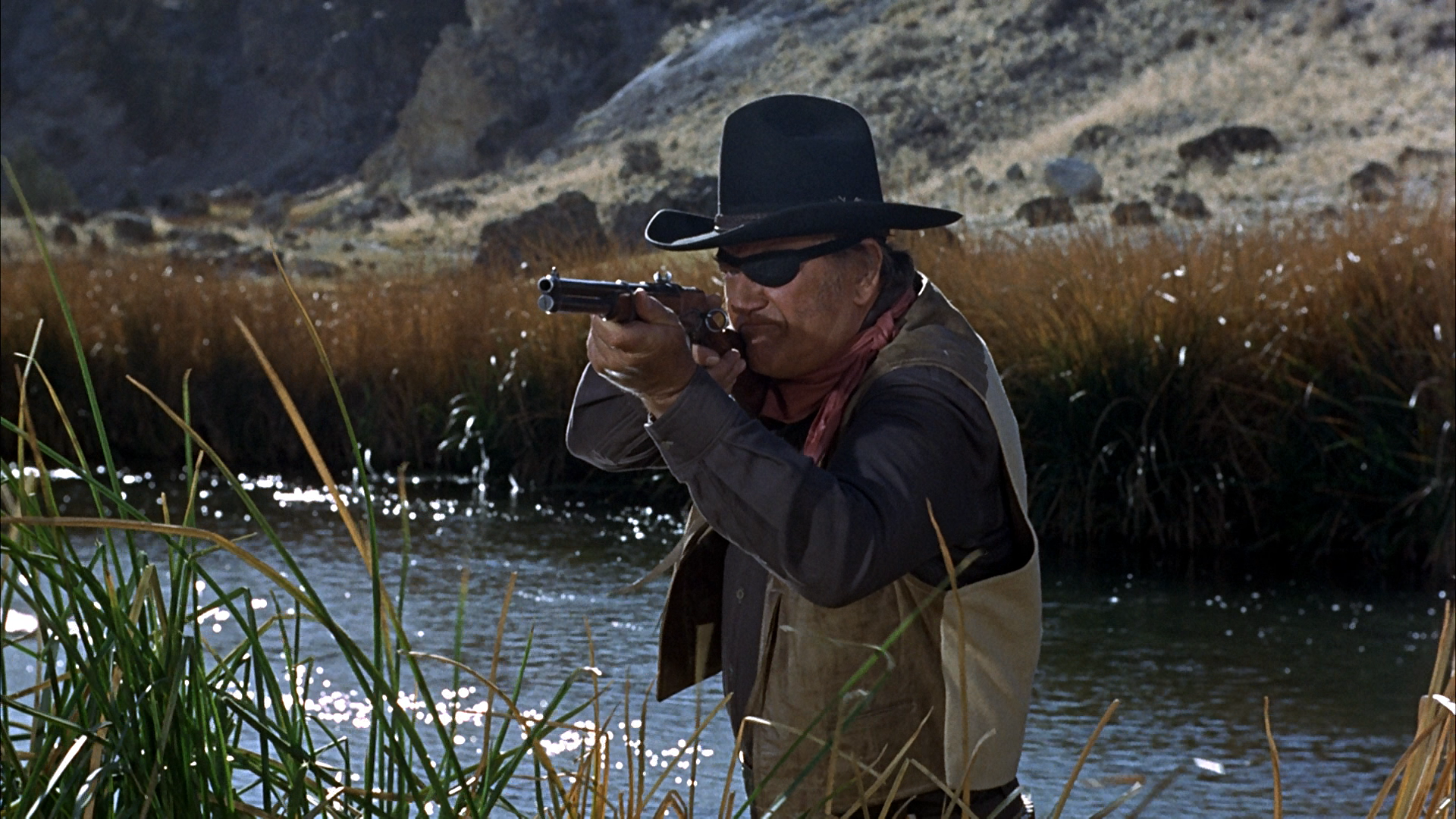 Maddie comes into town and her interactions with Cogburn are, how do you say, less than cordial. He disregards her requests to join his and LaBeouf’s expedition. “I don’t got time to track Cheney and take care of a baby all at the same time.” Their relationship is rocky at best. Later, after some hard days on the trail, as Maddie’s proved her fortitude and tough skin, she and Rooster have a conversation where it’s revealed that he’d been married before, and that his wife left him to return to her first husband, saying, “Reuben, [his real name] the love of decency does not abide in you.” He further explains that she took his son with him.

“He never liked me anyway,” Cogburn says. He shrugs it off, but the dialogue suggests the smallest inkling of hurt and loss. In the Coen film this conversation takes place on horseback, between destinations, and it feels more like a time-filler than anything else; a conversation to get the two parties from Point A to Point B without boredom. In Hathaway’s, it takes place over a campfire, a more intimate setting, and feels more like a bonding moment between two people; one who’s lost a father, the other who’s lost a child. This father/daughter relationship between the two is further strengthened as Cogburn hurries to save Maddie after the rattlesnake bite, and reaches its peak in the end when Maddie tells Rooster she’d like him to be buried in her family plot beside her. This is a whole relationship missed in the 2010 film. Cogburn saves Maddie but the payoff to the their bond is missed, as we never see Cogburn again and are merely informed by some characters as Maddie goes to meet him as an old woman that “he passed away three days ago.”

It's things like these that lead me to think that while the Coen film is a decent Western, it missed these opportunities its predecessor took advantage of that could’ve propelled it to the same level of greatness in my mind. Check out the John Wayne film, and see what you think.