A World of Keflings Review

What can you say about a game that refuses to be like any other you’ve played? With A World of Keflings, developer Ninja Bee has concocted a very unique game that will undoubtedly find a niche but will certainly leave a lot of gamers scratching their heads in confusion.

A World for Keflings follows a similar premise to its 2008 predecessor, A Kingdom For Keflings. You play as a giant version of your Xbox avatar and help a bunch of wee folk – the titular Keflings – build houses, factories, academies and ultimately castles. It plays like a simplified version of an RTS or Civilization game, with your giant able to collect and gather resources, such as wood and ore, or sending the Keflings to do so by placing them next to resources for them to harvest. Having your giant seize Keflings and drop them next to their intended task is a clever substitution for using a keyboard and mouse to select units, though trekking on foot across your ever increasing kingdom makes you yearn for some sort of mini-map. 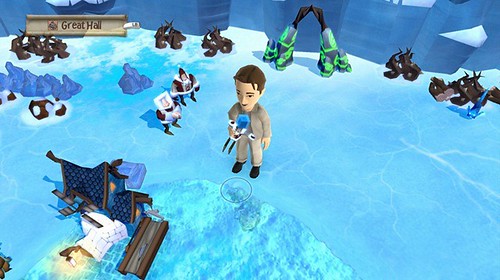 Gathered resources are used to construct pieces of other buildings, such as doorways and balconies, and your giant pieces them together to make new structures. As you create new buildings for your Keflings you can unlock refineries that turn basic resources, such as sheep wool, into more advanced items like cloth. These in turn are used to make the components for more complex buildings like wizard’s towers and laboratories.

The problem with this formula is that there is no feeling of advancement. I had a sense of accomplishment when I built my first couple buildings and made my way from the introductory kingdom (ice) to the second (forest). But after a few more hours of doing chores for the Keflings – bring me ten logs of wood to make houses, now build three more houses, now paint those houses orange – I began to feel less like I was constructing a kingdom and more like a glorified housemaid.

By the time I got to the third and final kingdom (desert) it felt like I had spent six hours playing a tutorial for a bare-bones RTS; I was being lead around by the nose by the computer, waiting for a greater objective that never materialized. The only reward for going further was more tedious busy work. If this were The Sims, my goal would be to keep my character’s mood up. If this were Civilization, I would be trying to generate the most culture or science. But it’s World of Keflings, which means the only thing to do is the repetitive chores of a bunch of needy Lilliputians. 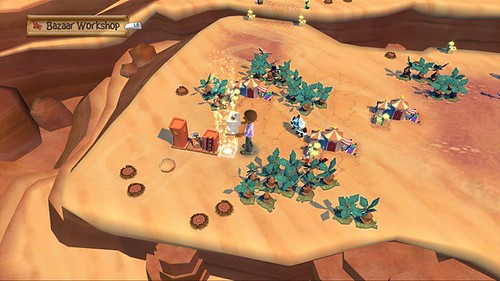 Looking back, I cannot help but think that I was not the target audience for this game. While I had little taste for the game’s thesis, NinjaBee put a whole lot of love into their title’s execution. The music is great, there’s honest-to-goodness laugh out loud writing and characters from certain other XBLA titles pop up if you have achievements in those games.

The hardest part about reviewing this game is that I can see how a person with a different mindset would enjoy it. It’s a whimsical, relaxing game devoid of enemies or conflict. But I’m the one reviewing it, and ultimately the only question worth answering is “Did I enjoy playing it?” Though I found parts of A World of Keflings charming, most of the time I just wanted to play something else.