Time travel is one of the most interesting ideas that science fiction plays with, and dozens of films and books have been written about the possibility that you could go back in time and fix your mistakes. Tons of video games have used time travel as a plot device but very few have actually incorporated it as a mechanic (the only ones that comes to mind for me are Prince of Persia and Braid).

Achron is an upcoming indie real time strategy game that sets itself apart by featuring time travel and time manipulation as a key mechanic. The game is currently in beta and we decided to take the time to try it out and see how far it has come since it was first announced and shown in 2009. 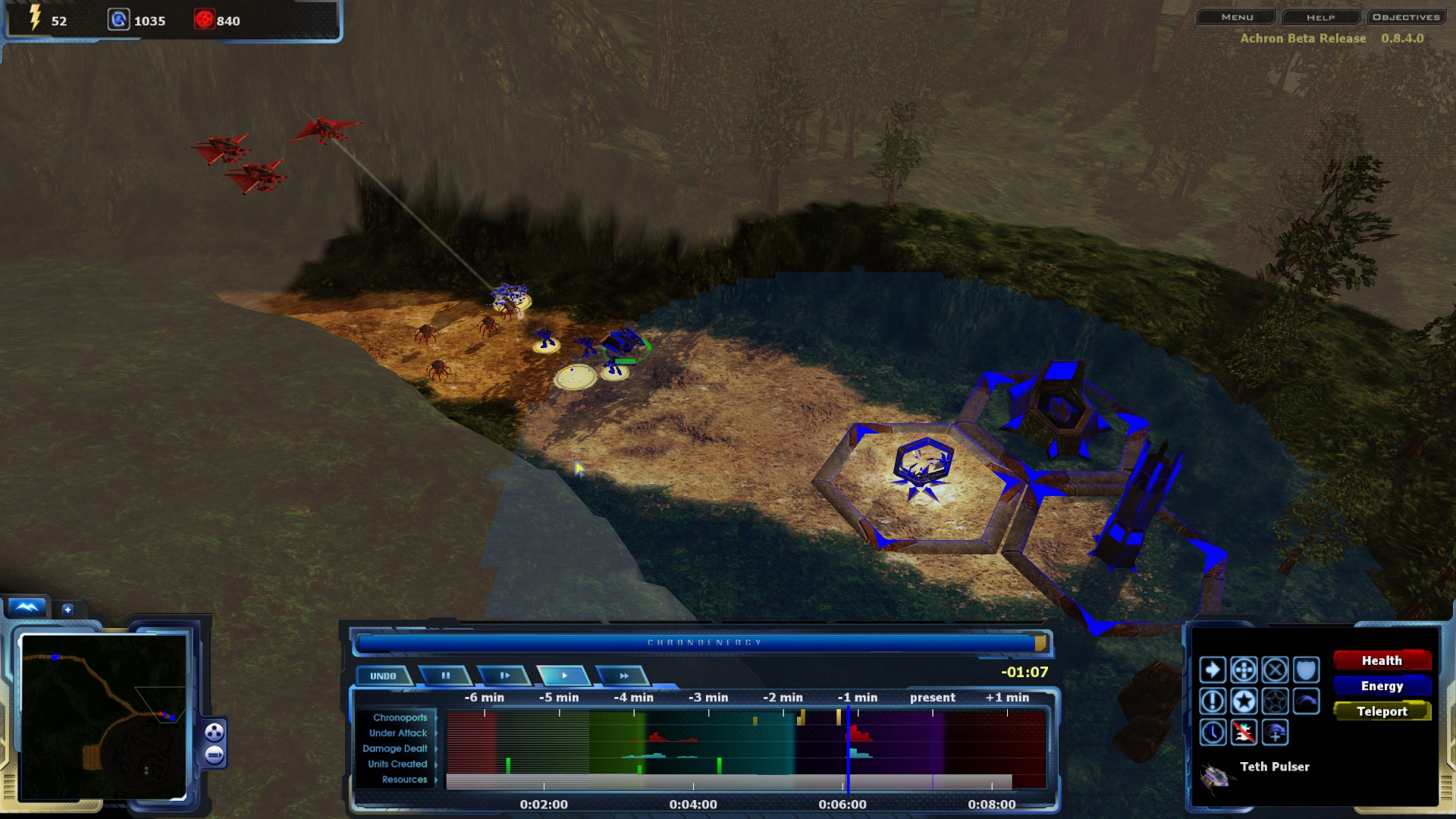 In Achron you play as one of three races in an epic science fiction story that incorporates time travel as much as the gameplay does. Much like other RTS games such as Starcraft, the three factions are very distinct and all have different strengths and weaknesses. The first alien race, the Vecgir, are much more focused on teleportation technology while the second, The Grekim are described as masters of time travel. In between these two alien races are the humans who have superior firepower on their side. It all sounds very interesting but sadly we didn’t get to see much of that in the beta build we played.

The way that time travel works in the game is that at the bottom of the screen there is a time-line that shows the last six minutes and the next minute or so. You can jump to any point on the time-line by clicking on it, and any conflict at any point in time is shown by the various graphs. When you go back to the past and change things it uses up your Chrono Energy which takes time to recharge; the further back you go and the more you change, the more Chrono Energy it costs to do things. While time travel can get confusing very quickly, Achron does a great job of allowing you to get the hang of what you can and cannot do using the time travel features.

Along with time travel, Teleportation is also a key part of the game and this is done really well. Your teleporters are able to 'port units across the map, but only units that are directly near the teleporters themselves. This is good because it prevents them from being entirely overpowered.

From what we played, Achron is looking good from a design standpoint. The only real issue I had was that the game's current art style. While graphics are relatively unimportant for RTS games, it did seem to lack the sort of style or flavor that games like Starcraft and Dawn of War offer. Overall Achron is looking very promising. The time travel mechanics work very well and it will be interesting to see the kind of multiplayer community that it creates. Achron is currently in beta and you can try it by pre-ordering the game for $30USD.