Action Comics is one of my favorite series from the New 52. I was surprised to like this series because I did not expect it do be so good. I have never read the Action Comics series before the New 52 so I was happy to start reading the series when the New 52 started. 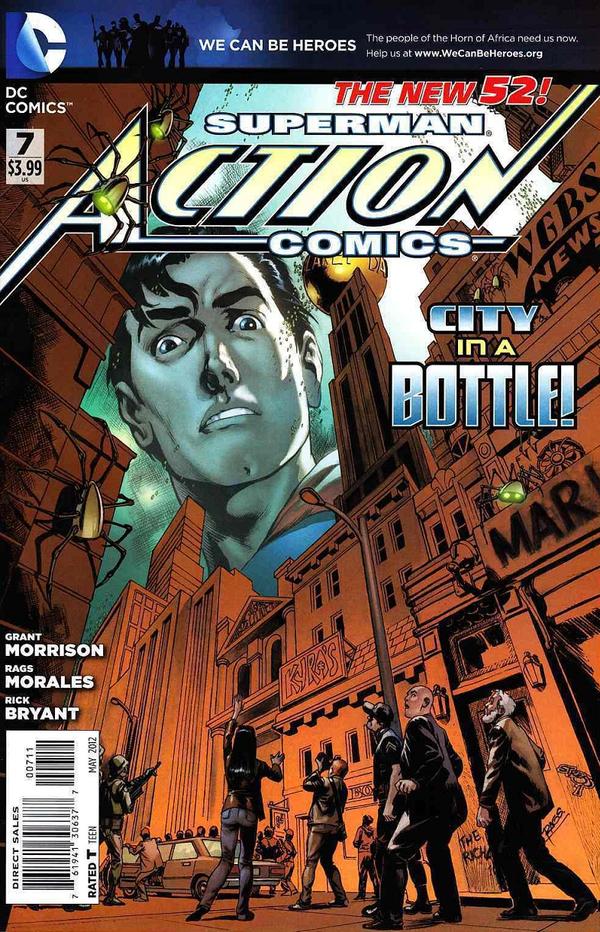 In this issue Superman tries to save Metropolis from a group of aliens who have shrunken Metropolis into a bottle. Everyone needs Superman’s help, but he has to decide if he wants the life he was suppose to have on Krypton or life he has on earth.

In my opinion, this issue was not as good as other Action Comics issues. I felt like the flow was a little off because of the gap of story we have had. Since we had the two issues origins story. They should have recapped a little bit in this issue that way the readers could be reminded of the story.

Not much happened in this issue that would of made a big impact in the story. Most of this issue is Jimmy and Lois following Lex around Metropolis. I hope we get to see more story progression in the next issue to make up for this issue.

One thing I did like about the story though was the choice that Superman has to make. He has to make a choice between Earth and the life he could have had on Krypton. We get to see a little bit of the old Superman we know and love when he makes this choice. You can see that he is starting to know what his responsibilities are on earth.

The art in this issue was pretty good. I have been really enjoying the art for this series and this issue was no exception for great art. Superman also gets a new costume in this issue and I think they did a great job with the art on his new costume. That is one thing I was most impressed with in the issue.