Very few actresses go from one-time TV guest roles to having their name standing solo at the top of a movie poster, let alone in the span of three years. If you don’t know who Emma Stone is now, you will soon; slowly but surely, she’s changing the face of girls in comedy.

The 21-year-old Arizona native got her big break from none other than Judd Apatow. The Apatow-produced hit teen comedy Superbad was Stone’s first film appearance, but she had the presence of a teen comedy veteran. She played Jules, the girl Jonah Hill’s character had a crush on who was throwing the big party at her house. According to imdb, Stone is originally a blonde, but Apatow convinced her to dye her locks red, a look she kept. As proven by Amy Adams, those who have gone the redhead route and pulled it off have found it changed their careers.

Superbad landed Stone roles in comedies and romantic comedies alike including The Rocker with Rainn Wilson, The House Bunny with Anna Faris and Ghosts of Girlfriends Past. Her love interest role along with Jesse Eisenberg in Zombieland also paid huge dividends for her. She has five projects currently in production and Friday marks her starring debut in the comedy Easy A, a modern teen twist on The Scarlett Letter. 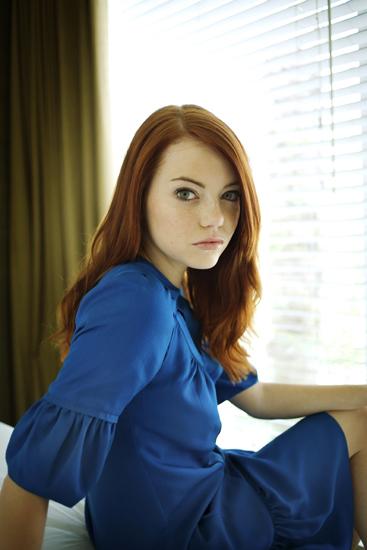 Meteoric is one easy way to describe Stone’s rise to popularity. Her role in The House Bunny as nerd-turned-gorgeous sorority girl displayed her versatility and her ability to pull off a variety of looks and characters. She can play fragile leading lady just as well as she can do the generic geek’s love interest. Even doing that in Zombieland, Stone found a way to give a very revealing performance. Her characters have never been hollow and have always managed to have an unexpected layer of truthfulness to them.

That brings us to Easy A, where Stone stars as Olive, a girl who agrees in kind to pretend lose her virginity with a gay schoolmate at a party to help his reputation despite the obviously destructive consequences the act has on her own. When more boys come to her for reputation assistance, Olive becomes the school “slut,” and begins to devise ways of righting her ruined image.

Teen comedy, yes, but this premise actually has that layer of depth that fits Stone’s ability, something similar to a John Hughes film. Not only will she be funny, but she’ll also likely find a way to deliver the deeper parts it in a way that won’t come across as melodramatic.

Now, try and think of a female comic actress who has managed to star in a comedy that wasn’t cheesy and tween-geared or a cliche romantic comedy. It doesn’t really exist outside of the '80s maybe. These types of comedies don’t offer starring vehicles to young women actresses, but Easy A will break the mold — and with Stone serving as the poster child. Without starting a feminist diatribe — I say thank goodness.

It’s true: as simple as the concept for Easy A seems, these kinds of movies feature guys like the aforementioned Jonah Hill or Michael Cera, maybe a Jay Baruchel, etc. Finally we have female character that is neither love interest, nor superficial supporting role. Mean Girls, which had that kind of female protagonist in Lindsay Lohan’s part but surrounded her with stereotypes, is the film that comes closest and it’s heralded as one of the best teen movies of the last decade at least.

It’s everything but safe to say that “A” will find box-office success this weekend, especially sandwiched between two other anticipated and well-publicized films, but if there’s an actress who can start to turn things around for young women in starring roles, it’s Stone. Kristen Bell should arguably have been the one to do it, but choices of When In Rome and this fall’s You Again have turned her into a rom-com darling. With the right approach, Stone could carve out a respectable career in comedies that rallies both male and female audiences instead of the two extremes on the spectrum in the geek-gets-girl film and the cheesy rom-com. If any measure of box office success can come out of Easy A, perhaps more genuine content with young female star vehicles will enter the picture. Who knows.