The “Age of X” kicked off this week in a big way with the first two installments of the crossover event. The first chapter takes place in X-Men: Legacy and the second in New Mutants, with both chapters written by Mike Carey the brain child behind the cross-over. The series seems heavily influenced by the “Age of Apocalypse” the 90’s series that for four months changed the title and setting of all the X-Books as a parallel world showed what would have happened if Xavier had never started the X-Men. This series is much the same way, but the presence of Xavier is still in the book. The X gene has been outlawed and as such anyone born with the gene is put to death either on the spot or in prison. Because of this all the Mutants of the world have been pushed into one area called Fortress X. The mutants are attacked by mankind who break their magic barrier to attack them every single day.

The story begins with one such attack and we’re introduced to the characters as they take turns performing in battle. There are familiar characters like Namor, Storm, Jubilee and Colussus and then plenty of other characters created for the event/timeline. Here you will not find Cyclops in charge, in fact you won’t find Cyclops since he goes by the name Basilisk. He has to wear a face mask that opens in the center because Arcade cut off his eye lids and turned him into an executioner of Mutants on Alcatraz Island. The feild leader in this case is actually Cannonball, which is a good surprise. The team assembled makes quick work of the humans sent to dispatch them which leads Magneto the think that it was just a distraction. Magneto is like the General/President of all the mutants and over sees the battle from afar. 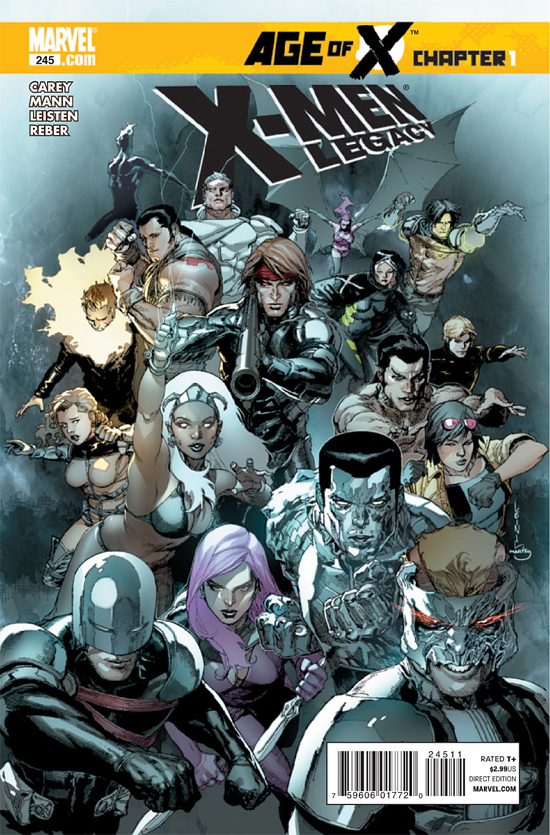 Sure enough a much bigger army is sent through the barrier with a big ass tank and the goal of destroying Fortress X. A secondary team is assembled to deal with the threat. This smaller team manages to defeat the tank, but loses their team leader in the process. When it’s clear that she’s not going to make it Cannonball calls for Rogue aka Legacy or as everyone calls her in this world "The Reaper." She comes and absorbs the dying mutant’s powers and memories so that she will not be forgotten. The first chapter ends with the capture of Kitty Pryde who escaped from the barrier. Magneto places her in their prison while Rogue finds a digital camera that she brought back with her.

In the second chapter Legacy (Rogue) is trying to get answers about the camera. She looks through the pictures, but every single one of them is completely black and makes no sense. She visits the mutant Madison who can talk to machines and asks him to look at the camera. He confirms that it’s 247 pictures of nothing. Legacy borrows his powers and infiltrates the holding facility within the fortress. There she runs into a blinded mutant wearing a New Mutants uniform. The woman calls Legacy, Rogue and says that everyone is confused and thinks their someone else. She tells Legacy to ask the Professor, "where everything was amputated but the patient didn’t die." Legacy keeps moving forward to find Kitty Pryde.

Once she does she asks her about the camera, but Kitty isn’t giving up information that easily. She says that someone sent her to the outside world and asked her to take pictures of everything, but that there was nothing to take pictures of. Legacy is soon discovered by Danger, the blue Danger Room entity and has to leave. Before she does she absorbs some of Kitty’s powers, but none of her memories. She flees from Danger and finds the Professor (X that is) in a comma like state. She makes contact with him and takes his memories and powers. She loses control and sends out a huge telepathic spike to everyone in the fortress. She sees things that are happening or will happen and it’s just too much for her. "X" their voice in the sky asks Magneto what to do and even though he is in love with her, he has X follow protocol and sends out a team to bring Legacy in. 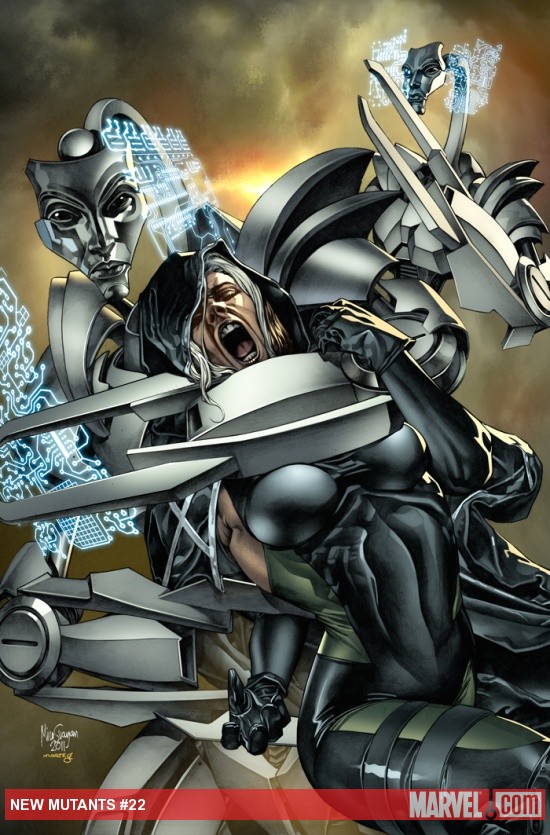 The first thing to note about this story is that the mutants are killing the humans. This isn't a battle and retreat kind of deal. The humans are trying to destroy Fortress X because then the mutants will be more exposed and easier to attack, but that makes every mission a suicide mission. It was interesting that the mutants were killing and enjoying it almost as if Magneto's dreams had finally come true. Not once does a mutant say, "I don't want to kill them" or take pity on them. They can't afford to, because the humans are out for their blood 100% of the time. I thought that that was a nice twist on things to have the peaceful mutants become remorsless killing machines.

Mike Carey crafts an interesting story that doesn’t appear to be a parallel earth at all, but rather an intense Danger Room scenario. The characters are familiar and yet completely reinvented given them a fresh look and personality to get to know. The addition of new characters is also a breath of fresh air in the X-Men’s world as the group has become a bit stale since Wanda wiped out the X-Gene. Carey does a great job using Rogue to narrate the story and keep her as the one character that the reader can latch onto while exploring this crazy world. Some of the dialog and banter is mundane and generic; it’s almost as if they had to say something while Rogue narrated. There are several times that the dialog is there just to give the reader information and doesn’t sound real at all. An example is when Cannonball is telling Basilisk about his own past. This is clearly there for readers that didn’t pick up the "Age of X: Alpha" one-shot and recaps why he has the mask. There’s no other reason for Cannonball would go into so much detail about it.

The art is good in both issues, but what is really great is the character designs. This is the coolest the X-Men have looked since the “Age of Apocalypse.” I hope that Marvel keeps some of the character designs depending on how the crossover ends, because they are extremely cool. Designs of existing characters have a hint of the old costume mixed with a modern look that is awesome. Gambit for example still has the staff and the trench coat, but his costume underneath is a dark grey with silver highlights. Northstars costume is also much improved being all black with red glasses and two glowing red chains hanging from his wrist. When he runs it looks like the motorcycles from Akira and that’s cool as hell. Even the sublte changes to Rogue's costume make her look iconic as she did in the 90's.

Overall I’m very impressed with the story and art for the first two chapters of the “Age of X” and I like the mystery presented. That’s something that hasn’t been done in X-books very much and usually when it is, it doesn’t turn out so well. So far Carey already has a leg up on series like the “Twelve” and “Messiah Complex.” I’m not crazy with this being a crossover and think that it should have had its own mini to support it, but it looks like so far it’s only going to be in X-Men: Legacy and New Mutants. I have a feeling that this is to help out New Mutants or it might spell the end for the series in general. The next two chapters hit in March in the same two titles so look for an update as they hit.