In 2002, David Jones, former developer on franchises such as Lemmings and Grand Theft Auto, bought out his long time stomping ground of Rage Software and reformed it under the name Realtime Worlds. In 2007, Realtime Worlds released it's first major title, third person shooter Crackdown. The independently run company found success and an audience, despite mixed critical acclaim. By 2005, RTW had begun work on All Points Bulletin, a GTA inspired cops and robbers styled MMO.

APB is an MMOTPS (Massively Multiplayer Online Third Person Shooter) in which players take the role of vigilante enforcer or rogue criminal in the virtual city of San Paro. Gameplay is split between two action districts which are split into instances of up to 80 players each. Each side has separate NPC contacts to do basic repeatable missions that reward money and reputation for the player amongst factions and contacts. Reputation unlocks equipment, items, clothing, and designs which you can then purchase using the in-game money you collect from missions or bounties.

The missions themselves are down right boring. For instance, as a criminal you may receive a mission to go spray paint on a wall somewhere, just go do it and you get money and reputation. However, the opposite side may dispatch other players to stop you, which is where the fun in APB is. Completing missions, bounties, and getting kills/arrests will increase your Prestige or Notoriety depending on your allegiance. These are constantly floating values that increase or decrease depending on what you do. Having the maximum value will enable you to attack any player in the instance at any time, but also leaves you vulnerable to attack from anyone as well. 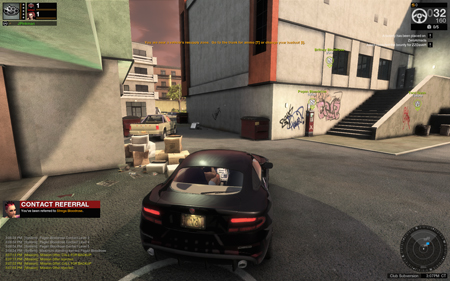 This brings us to the bounty system. When a player completes several goals or kills/arrests in a short period of time, the opposing sides NPCs may place a bounty on you, making you vulnerable to attack by any players of the other side. If you kill/arrest someone who has a bounty out, you will be rewarded with in-game money, reputation, and Prestige/Notoriety. Collecting bounties is always fun, but most bountied players I've encountered have been either way higher rank or using an extremely imbalanced weapon (which I'll get to later). I've yet to have a bounty placed on me, however a friend of mine did get bountied for completing our objectives and scoring kills. The downside for our group was his vulnerability and not being allowed to help him fight off attackers. This is a part of the game that could really use some work.

Gameplay consists of gunplay mixed with grenades. There are several types of weapons ranging from shotguns to sniper rifles; the typical set we see in modern era back drops. The third person perspective can be a bit of a nuisance though, as it's strictly behind character and not over the shoulder like you would see in Gears of War. I don't know how many times I've missed a target because I couldn't see around my own head. Luckily when aiming down the sight, you can lean to the left or right and peak around corners. What's not so lucky is the fact that the collision boxes for most of the game's assets are slightly larger than the model, causing you to shoot into your cover rather than your enemy. Unfortunately, it doesn't seem that many people around the forums or fan sites are noticing it, that or it just doesn't affect them. 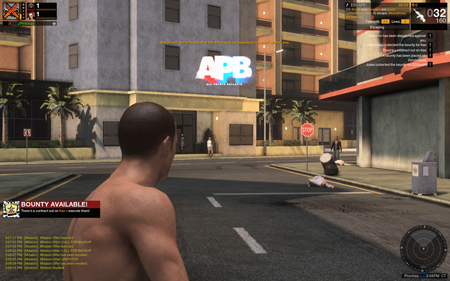 On top of that, player hit boxes are iffy at best. This could be due to poor connections or the game itself, but either way it can be frustrating. In close quarters, you can at times unload an entire clip into someone and not receive a single hit indicator whilst dropping dead out of nowhere because you just received a ton of damage all at once. Luckily there are no bonuses for head shots and no penalties for limb shots, if you get all hot and bothered by this then I'd recommend playing some more Modern Warfare or asking your mom if you can browse the interwebs. All hit boxes are equal, just harder to find against laggy players or when your connection is having its own problems.

Another major problem is the massive imbalance in some of the weapons. Early weapons are weak compared to later versions and it takes several hours to outright unlock some of the better ones (read as 'grindy'). Shotguns can be frustrating at times due to their unpredictable range, and sniper rifles are basically two shot weapons that will leave you raging for minutes after the fact. Most of the automatic weapons seem to be pretty fair though, and if you can shoot while moving, you can definitely overcome the imbalances using them. 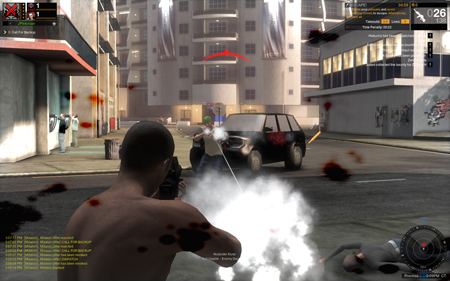 APB is certainly far from being a true MMO, it's more of a big lobby system with lots of persistent features. 80 people certainly isn't enough to warrant the MMO tag unless we start calling Battlefield 2 and ARMA the same. The game plays too much like a generic FPS game that's stuck in third person at times, so maybe we define MMO as 'Third Person Online'? I'm not sure why they chose to push the game as an MMO, especially since MMO's have a horrible stigma attached to them by most gamers.

Now it's not all bad. A lot of what APB does well is forcing you to find a team and work together. I've played with both friends and randoms, and most people seem to have a decent awareness of what needs to be done in a group. Completing a mission in a team rather than alone is far more rewarding, both in terms of in-game rewards and gratification.

The graphics in APB are quite impressive, even on the lowest settings. RTW really did a great job of molding the Unreal Engine for performance and visual aesthetics. There are going to be some people that have problems with memory and hard drive speed constraints though, as the game can be a serious resource hog. I'm able to play comfortably at max settings and 2x MSAA on my mid-to-high end system.

The art style and customization features are top notch. Want a midget with a mohawk? You can do it. Want a really fat dude? Yep. Asian-American version of Jim Dangle? I've seen it. RTW even went so far as to include a custom music mixer, allowing you to create your own tunes that can be played to any poor soul you send off to the other side. You can even create your own custom logos to put on vehicles and clothes, allowing you to really stick out in a crowd. RTW has redefined the standard for character customization. 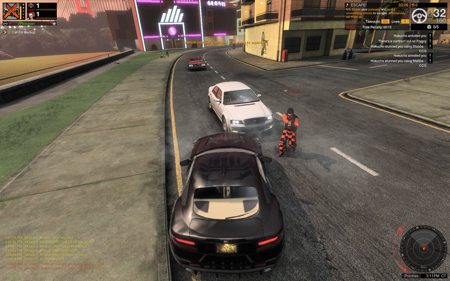 The audio is another incredible feature that is going un-noticed by a lot of people. APB is the first MMO to contain positional VoIP. This means that basically, if a player to your left says something on their mic, it will sound as if it is coming directly from their player model. This helps in pickup groups where the words 'me' and 'here' can be extremely confusing. There are also tons of music tracks that you can add to a play list for your vehicles stereo. They range from techno to heavy metal, so there is sure to be something for everyone.

The most innovative thing of all for APB might just be its pricing model. You pay for blocks of hours at around $6.99 for 50 hours, or unlimited hours of play for 30 days at just $9.99. You can also buy RTW points, which are similar to Xbox Live Points, and use them to buy items from the in-game auction or purchase more game time. So if you don't want to commit cash every month or so to the game, you can sell items in-game for RTW points and get your hours that way. All of this is done in a special non-combat district which is accessible even if you're out of game time.

The unique price model and hope for future balancing will keep me playing the game for at least a month or so. RTW has promised more content and even an open deathmatch rule set called 'Chaos' in the future. Lack of more districts, more clan features (feuds, custom gear, fame system), and open deathmatch areas are the only major flaws to the game. I recommend it to anyone who loves player versus player or multiplayer games in general, as it is the most unique thing to hit the genre in quite a while, even though it'd be better served as a lobby styled FPS.