Almost Human has all the makings of a paint by numbers procedural cop drama. A cast composed of familiar archetypes, a stern, by the books detective (struggling with some serious issues) paired with less than ideal partner (by his standards), an attractive lady detective sure to provide necessary sexual tension with protagonist, an arrogant, sleazy rival detective who bestows snide comments and observations here and there, an eccentric lab geek whose tech-speak and overall geekiness impart comic relief, etc. The big exception on this show is that it is set in a dystopian 2048 in which crime has significantly increased. Every cop is required to have an android partner in efforts to increase productivity.


There is nothing necessarily new about this futuristic landscape, if you have seen your share of sci-fi movies and shows, then chances are that the world of Almost Human will feel quite familiar. The series even opens with a very Total Recall-esque sequence. It certainly borrows from popular films of the genre, Blade Runner, Minority Report, etc. You also won’t be finding anything new or innovative in terms of character and story, as I said before, this reads like an average procedural set in robot-age, mashing up a popular television genre with recognizable science fiction robot stories. Granted the first hour is mainly an expository introduction to this world and its inhabitants and as most pilots do, takes a lot of time explaining the dynamics of the universe. An advantage of such a derivative setting and story is that most audiences are able to easily and quickly adapt to the world presented. There is a kind of shorthand used by the writers to communicate certain aspects of the future. 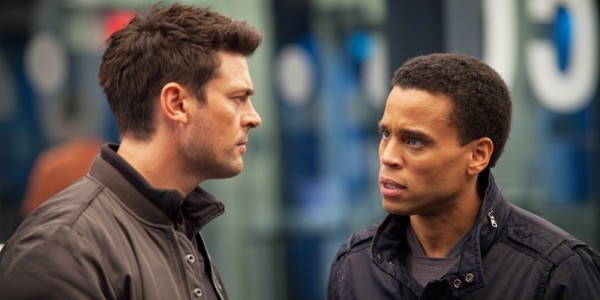 The mythology established in the pilot is not terribly intriguing. Again, relying on science fiction conventions and clichés, John Kennex’s backstory is entirely too unoriginal to really make an impression, that along with Karl Urban’s wooden, lifeless performance makes for a weak protagonist. Who really cares about his evil ex-girlfriend and the shady crime group ‘Insyndicate’? Urban doesn't add anything interesting to his performance to makes him a unique character. As the android cop assigned to Kennex, Michael Ealy does manage to impart some kind of personality to an unlikely character. Dorian is charming, intelligent and engaging, often seeming more human than Kennex himself. Maybe that is what the writers are going for. The series explores themes of humanity, the value of life (synthetic or not), what makes us human, etc. the choice to have the android character be the more empathetic and humane character could be a deliberate way to further communicate such themes innate to the genre. And as the show went on into its second hour, Urban’s performance improved a touch. Apart from the compelling Dorian, the characters come off as templates of people, not actual living beings (maybe they are all androids). The performances are serviceable; it’s always great to see Lili Taylor onscreen even if it is in a thankless role, Minka Kelly is sufficiently attractive but dull as hell (she’s nothing but consistent, that one), Mackenzie Crook is also fun to watch in almost anything he does and his lab geek character is the most engaging after Ealy’s Dorian.


If the first hour serves as an introductory chapter for the series, then the second expands the world some as well as introduce us to the seedy underworld of the robot sex trade. Sexbots! The show sure did not waste any time on that. The best aspect of this entire plot is watching these poor actors (particularly Lili Taylor) have serious discussions and saying “sexbot” over and over without an iota of humor. They really said it a lot; it would be a good drinking game. I think drawing a bit of humor from these absurd situations would bode well for the show; the brief scene with Rudy and the sexbot was amusing enough. And while the main case of this episode is fairly uninteresting and uninspired (with all the dull, techy robot talk and such low stakes, I cannot bring myself to be compelled, despite sexy robots), the new, lighter dynamic between Kennex and Dorian is a definite improvement. Their banter is well written and executed and it is significantly more fun to see them like this than Kennex being all surly with Dorian all the time. The testicle scanning conversation scene might possibly be the best in the entire two hours. Still, some scenes suffer from heavy-handed dialogue and unnecessary emotional codas. Look, these deep philosophical questions (about humanity, death, the afterlife, etc.) are fun to ponder and explore and they lend themselves to this genre. Science fiction in general has been utilized through time to better express such difficult life questions, but it is best when these issues are expressed organically through the narrative/story, not by just having the two main characters talk directly about said issues in a clumsily written conversation. The genre already informs such questions, no need to be so unsubtle. This is an example of the show maybe taking itself too seriously, or not trusting the audience enough to get the crux of the story. We get it, no need to oversimplify. 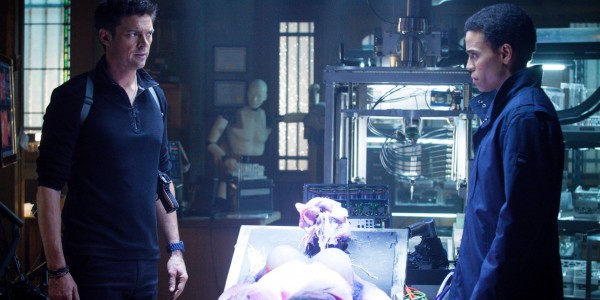 Almost Human is a very well executed program, it looks expensively made, the special effects are quite seamless and the production design, while unoriginal, looks good. Still, there is not much that separates the series from the many procedural shows like CSI or NCIS. For those who are fans of the procedural formula, then this is a series that executes it very well and within a vaguely interesting setting. But does Almost Human have the potential to become more than just NCIS with robots? What do you think?