When I heard that Marvel had relaunched Alpha Flight, I have to admit I was intrigued. Then I found out that Greg Pak and Fred Van Lente where the guys that were writing the book so I could not refuse to pick it up and give the first issue... eh, point one issue a shot.

The new series of Alpha Flight takes place after the events of Chaos War, where some of Earth's mightiest heroes were brought back to life. Among them were members of Alpha Flight and now the original members of the team are reunited and have taken the call of protecting Canada from any and all dangers that might come their way including parking tickets!

The first issue of Alpha Flight reads very slowly and it failed to keep me excited after the initial idea of the book. It almost felt like Episode One of Star Wars where you know that Star Wars is good, but when you get to the story of the first movie it turns out to be a political movie with some action parts. That’s exactly how Alpha Flight felt. The introduction to the characters felt quick and without a lot of depth which could leave some newer readers in the dark about who these characters really are and why we should care about them. A good example of this was Marrina’s appearance when she busts out of nowhere and starts fighting with Citadel, leaving you asking yourself who she is and why is she helping this team. The action was quick as well but it didn’t really explain who they were fighting and what was the villain’s mission. 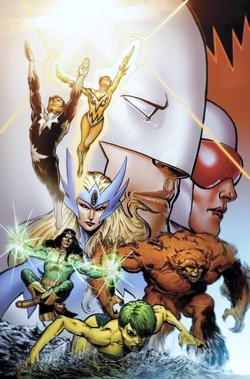 The art in the book on the other hand was great. Every level of detail looked great and the characters looked elegant and real. The areas where I really enjoyed the art were in the panels with Guardian and Sasquatch. Truly a lot of attention was given to making the characters looks heroic and very beautiful.

Although a little slow moving and not very well explained, I am still going to give Alpha Flight another shot. The book has a lot of explaining to do and I am hoping that by the second issue more questions have been answered and the whole political parts of the book are moved away from, except the parking tickets that was great *cough* sarcasm *cough*