A comic collector has been caught in Spider-Man's web, paying $1.1 million for a near-mint copy of "Amazing Fantasy" No. 15 that features the wall-crawler's debut. The issue, first published in 1962, was sold Monday by a private seller to a private buyer. ComicConnect.com chief executive Stephen Fishler told The Associated Press on Tuesday.

It's not the highest price ever paid for a comic book, an honor that goes to "Action Comics" No. 1 with Superman on the cover, which went for $1.5 million. But Fishler says the price paid is the most for a book from the Silver Age, the mid-1950s to about 1970.

The cover, drawn by Jack Kirby and Steve Ditko, shows Spider-Man clutching a villain in one arm and swinging from his web with the other. It originally sold for 12 cents.

"Spider-Man is one of Marvel's flagship characters so, yeah, I'd say 'Amazing Fantasy' is very important," said Marvel Comics editor-in-chief Axel Alonso. "Funny thing is, the series - which was formerly titled 'Amazing Adult Fantasy' - was scheduled for cancellation before issue 'Amazing Fantasy' No. 15 hit stands. It ended up being one of Marvel's highest sellers at the time, and paving the road for the 'Amazing Spider-Man' series that's run monthly ever since." 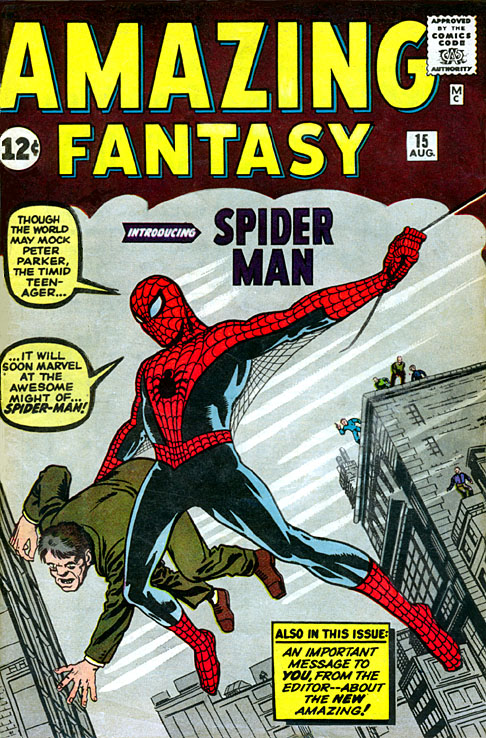 It also helped pave the way for Spider-Man adventures on the radio, television and the movie screen. Lee worked for Marvel for decades, eventually becoming its editor-in-chief, and then starting other businesses, including most recently POW! Entertainment.

He said, given the price paid for the issue, "I wish had saved my old Spider-Man books. "Back in the early 1960s, there was never any thought of saving extra issues or the original artwork that made up comics because there was no space to store the artwork or books sent back by the printer.

"So if someone came to deliver our lunch or sandwiches or something, before he'd left we'd say 'Hey, fella! You want to take these books with you or this artwork with you?'" Lee said. "We were giving all that stuff away. Nobody thought to save these books."