By: | Comic Reviews | August 22, 2011
Hey howdy hey, Spider-fans. Spidey has been getting a lot of buzz lately, even for one of the most popular characters in comics. He has a new movie and a new game coming out, 'Ultimate him' died, and, last but not least, he's getting an island named after him! Well, kinda-sorta. You see, while there has been a lot of interest in the death of Ultimate Spidey lately, our good old fashioned Amazing Spidey is still kicking derriere and taking monikers. The inauspiciously numbered Amazing Spider-Man #666, or perhaps auspiciously (depending on your preference) acts as the prelude to the new Marvel event "Spider Island."

Here is a brief summary of what's going on with Peter Parker. Short version: he's busy. Long version: in case your eye hasn't strayed while perusing your local comic racks, Peter has 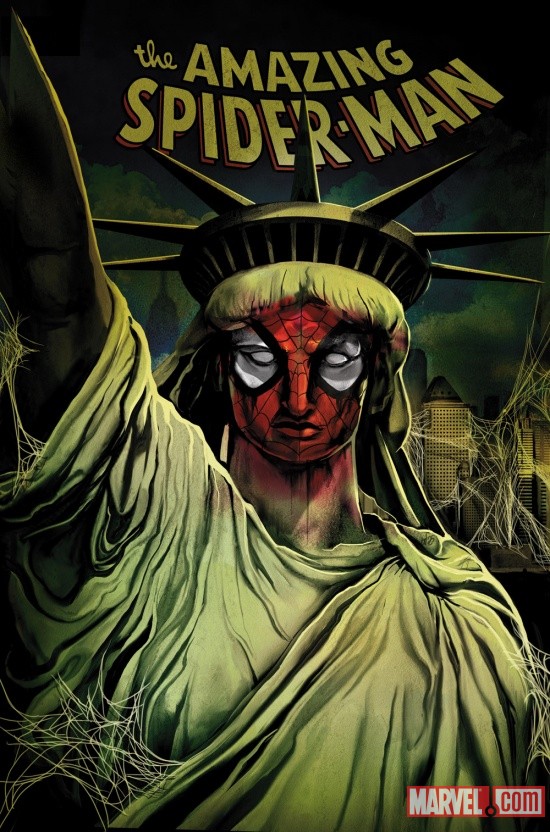 been getting around. Not only is he serving Spider duty and submitting new inventions to investors in his own comic, he's also a member of the Avengers and the Fantastic Four-Minus-One's new Future Foundation. After hours, he's been developing a new type of martial arts in order to better hone his fighting ability. He has a girlfriend, Mary Jane. Aunt May is moving out of the city, and former Daily Bugle boss J. Jonah is now mayor. Suffice to say, Spidey has a lot to deal with.

It's not surprising that he might be missing a rather odd and rather obvious problem. "Spider Island" has similar features to Carl Douglas's classic ode to martial arts, "Kung Fu Fighting." The only difference is that instead of everybody kung fu fighting, they're web slinging. So, yeah, definitely a big thing to miss, but I'm sure Pete will catch on eventually. This is only a prelude, after all.

It may only serve to set the stage for the oncoming spider-storm, but Amazing Spider-Man #666 is a decent book in its own right. There is a lot going on as we see Peter fulfilling the better portion of his previously delineated duties, as well as quite a few civilian webheads going about and the creatures that are causing the problem. Several cameos are made when Spidey briefly visits an all-hero poker game and Flash Thompson, currently starring in his own book as the new Venom gets a scene. Even the new Madame Web stops by to be cryptic and spooky as she does her best Morpheus impression, is prophetic while Spidey shows her he knows kung fu. There is so much going on and so many character nods that it feels like a really busy book, but that is kind of the point. Spider-Man is super busy. The art serves as a fine accompaniment, with the last page of a cluster of random New York citizens spinning their literal webs being the standout.

Whether you are a long time fan of Spider-Man or just starting to get interested, Amazing Spider-Man #666 is worth your time.
Rating
8.0