This was one emotionally charged episode of American Horror Story. I was absolutely exhausted by the time the credits rolled, and that was mostly down to Connie Britton's relentless performance during Vivien's extremely traumatic birthing scenes. The woman could scream for her country! ''Birth'' was the penultimate episode to a completely bonkers first season and managed to round out quite a few paranormal arcs, as well as raising one zinger of a question: where do we go from here?

Picking up from the heels of the last episode, the hour immediately addresses Violet still trying to come to terms with being six feet under (her own house). This was actually a really strong episode for Violet and made leaps and bounds in redeeming her as a character. When she wasn't summoning Billie Dean to help her rid the house of Chad and Pat, who have their sights set on Vivien's twins, she was banishing her own murderous rapist boyfriend from her life...er, death. And to cap it all off, Violet shares an extremely tender, underplayed scene with her recently deceased mother come episode's end. 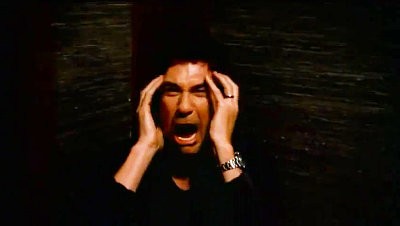 What?! I was not expecting that at all, especially since we're still trying to wrap our heads around Violet's death. What does this mean for the show? Will Ben meet his maker next week during the extended finale? Will season two focus on a new family? I'm not ready to move on, and yet quite a few loose ends were tied up this week, so it's hard not to imagine a blank slate for season two. There's only so much history the writers can milk from one house.

Given the lunacy of the situation, where a mad scientist (dead) and his two trainee nurses (also dead), were assisting Vivien in giving birth to twins (and possibly the antichrist) while her husband was having a mental breakdown on the sidelines, it was a surprisingly heart-wrenching few minutes of television. Vivien has always been a character that has grounded the series, even at its most mind-boggling, and Connie Britton's everyday-woman performance gave us a character worth caring about. So it was a blistering few minutes when I realized that, after having gone through so much madness during the entire season, this was how the character was going to bow out: drenched in blood and in soul-crushing pain. Adding more tears to an already emotional scene, Violet pops up to ask her mother to let go of her pain and join her on the other side, while Ben pathetically makes a false promise to makes things right again. Like I said, I was exhausted by this one!

It's not all doom and gloom (or should I say, in a less doomy and gloomy segment), I had a ball watching Sarah Paulson devour the scenery as the go-to medium, Billie Dean. We're given a brief run-down of the dread that emanates from the house and we're told that the evil within the place is caused by a demonic entity attempting to break through into our reality. She also provides us with an impressive flashback to the 1590s surrounding the real-life disappearance of the Roanoke Colony, where she informs us of a banishing ritual for ghosts. Later on in the episode we find out that the spell doesn't work, but I have a feeling that it has to be performed by a member of the living, which is why Violet's efforts to banish Chad failed.

What about that scene where Tate walked in on Billie, eh? Was she just overwhelmed by his past crimes that she couldn't hack being in the same room as him? I got the feeling that Tate was literally the embodiment of evil that Billie talked about. During the pre-title teaser, it's clear that the house and its undead occupants had their sights set on Tate from the very beginning. It's also firmly established that the house can control people to do all sorts of weird tasks. I think we're about to find out exactly how far the rabbit hole goes with this character next week. Violet was his only light, and she has made sure to put an end to the one thing that made Tate feel anything remotely human, so it stands the reason that the gloves will come off and all hell will break loose. But with the majority of the cast already dead, how can they possibly muster up the necessary tension?

Coming up to the finale, there's still quite a few questions that need answering. Is Tate connected to the Devil? Is Vivien's newborn the antichrist? Where exactly will the season take us now that we only have one living protagonist left? It's to the strength of the series that it always manages to keep you guessing, keep things astonishing, with never a dull moment in sight. I predict a spectral showdown of epic proportions with every single ghost vying for Vivien's child. Bring on the finale!