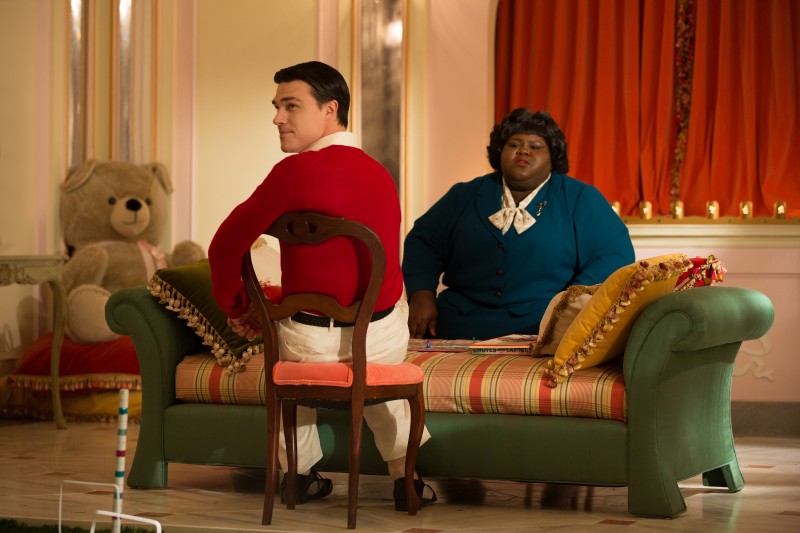 American Horror Story: Freak Show returns from a brief break with two shocking deaths and not much else. An uneven and tedious hour, “Bloodbath” has its good moments but its few highs do not make up for the predominantly and disappointingly mediocre episode.

The hour begins with perhaps the most engaging story thread, that of Dandy and Gloria Mott. In a therapy session, Gloria expresses her concern for Dandy and gives us a convenient summary of her son’s upbringing and peculiar behavioral history. The brief flashbacks don’t really communicate any earth shattering information regarding Dandy and his mother but do offer a fun and visually engaging look into the past. Though entertaining to see a mini-Dandy with his signature curlicue hairstyle, it would be nice if the writers would have more faith in their performers and let the camera stay on them as they monologue. When you have someone as gifted as Frances Conroy, it isn’t always conducive to cut away to unnecessary flashbacks. Let us see the performance, please. It is Gloria’s concerns and worries over her son’s criminal behavior that incites the conflict in their household and what spurs Dandy’s despicable actions in the hour. The Motts’ usual campy sensibility is alive in this week’s installment, providing a welcome comic element to the show and juxtaposing it with the truly horrifying situation in an engaging way. Dandy and Gloria’s heightened speech and demeanor have been incredibly fun and amusing throughout the season and their bizarre relationship has been a fountain of uncomfortable but fantastic humor and strife that culminated in the only way it could. With the growing tension between them, there was no question that either Dandy or Gloria would end up killing the other, and since American Horror Story has already featured a mother shooting and killing her serial killer son (Lana Winters in Asylum) it makes sense that the writers would go in the other direction for Freak Show. Their final showdown, though expected, is a tense and well-executed confrontation that furthers the narrative and marks an important character moment. Dandy is now seemingly free of the one thing that was tying him down, and I’m excited to see what shenanigans he’ll get into after this. 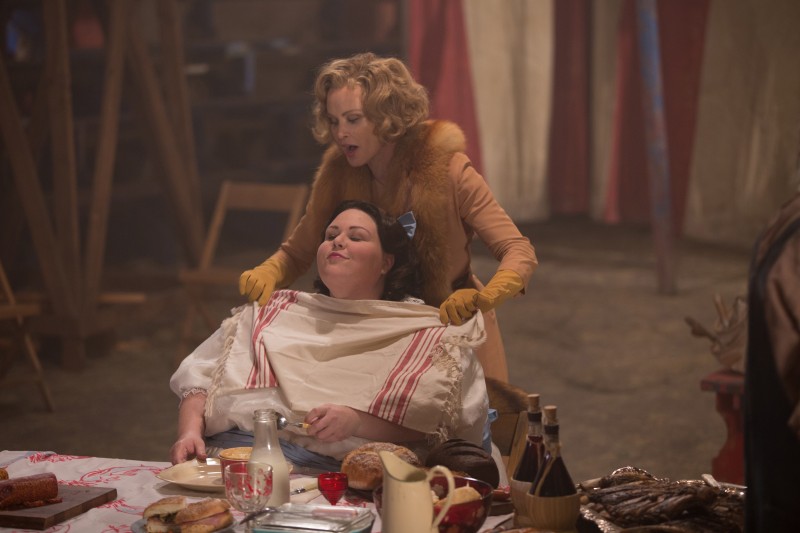 Over at the freak show, news of Ma Petite’s death has devastated the troupe and compels Ethel to confront Elsa about her shifty and nefarious behavior. Kathy Bates and Jessica Lange get a meaty scene (perfect for their Emmy reels, no?) in which the two women face off, allowing the actresses to battle, emote, scream, and revel in the melodrama. While it is a lot of fun to see these two play with each other, the scene does go a little too long, it meanders for a long while until the shocking moment when Ethel actually shoots at Elsa, hitting her wooden leg and exposing her secret. At this moment we learn the extent of Ethel’s pain and commitment to going through with killing Elsa, and also the fact that nobody really knew about Elsa’s secret. It is a wonderful moment that unfortunately leads to a totally unnecessary sequence flashing back to the immediate aftermath of Elsa’s traumatic attack. Do we really need to go back to the moment in which she gets her legs? Did Danny Huston need to return to the show to only remind us of the awfulness of the Axeman? What do we gain by this foray into the past? Nothing. It is just another diversion in which the writers can insert a cool looking vignette and fill in time. Thankfully, they make up for the needless digression by hitting us with an unexpected and sudden death. Boom! Right in the eye, Elsa uses her knife throwing and vicious survival skills to eliminate Ethel. A shocking moment that is made even more significant and horrible as the episode progresses and we get to see Elsa’s appalling ‘reaction’ to her dear friend’s death. It is darkly hilarious and horrifying at the same time. Elsa’s histrionics are so over the top that to us they appear to be nothing but artificial, but seeing poor Jimmy console their grieving leader only emphasizes Miss Mars’ manipulating ways. Along with the Mott’s storyline, Elsa’s endeavors in this episode compose the more compelling moments of the hour. Even when for some reason she ventures to Miami on a scouting mission and brings back the sideshow’s newest attraction “Ima Jiggles.” Somehow it works because, even though she isn’t very likable, she is one of the show’s more complex characters as opposed to the more one-dimensional supporting players. Which is why the rest of the episode is mostly uninteresting and underwhelming. The writers continue to try to make Penny someone to root for or care about (whatever) and the subplot does not land, even if it features Desiree taking control of the troupe’s women. Finally Angela Bassett is given something to do, this is probably the most we have seen of her this season, too bad that it is such a nothing of a story. And Jimmy is now just a sad shadow of his parents, now equipped with his mother’s alcoholism and his father’s anger streak, his clichéd and on the nose characterization has stripped him of the humanity we saw in those early episodes. Once again, Freak Show unloads a serviceable episode that provides just enough narrative progression and shocking moments to sustain itself, but isn’t able to step out of the comfortable and middling level of quality the season has mired itself in. What did you think?   Final Thoughts
Rating
5.9
Pros