A more focused episode than American Horror Story's usual scattershot storytelling, ''Smoldering Children'', perhaps doesn't quite pack the punch I'm sure we're all supposed to be left reeling from, given the twist we do get here: Violet is dead and has been for quite some time now.

In retrospect, there were more than enough clues to support this reveal, including a rather obvious one: she hadn't left the house in quite a while. But Violet, as a character, never fully recovered from betraying her own mother just so she could appease her mass-murdering, rapist boyfriend (also dead), and so dedicating an entire storyline to the both of them became more torturous to watch rather than compelling viewing. They're both completely unlikable individuals (not uncommon on this show) and cementing their eternal relationship into the series doesn't exactly send me to my happy place.

A lot of my resentment toward this part of the show, of course, has a lot to do with Tate. There's absolutely nothing whatsoever to like about this guy; pre-death, post-death, he's just horrible. And what did he do with Ben? I did enjoy the scene where, dressed in his go-to gimp killing costume, Tate attempts to attack Ben, only for Ben to momentarily get the upper hand and kick the crap out of Tate. I smiled. Is Ben going to tell Vivien that Tate was the one who raped her? I really do think he'll have to throw her back into the loony bin if he does, there's really only so much crazy a person can take.

When screen-time wasn't being wasted on Romeo and Juliette, it was providing a few more insights on one of the more colorful characters on the show, Larry Harvey, played with a feeble likeability (and creepiness, let's not forget creepiness) by the always dependable Denis O'Hare. This was more of a swan-song for the character, actually, as it's revealed how he ended up horribly scarred, and wouldn't you know it, the most vile character on the show had everything to do with it. Hopped up on drugs, and just before his terrifying massacre at his school, Tate first paid Larry a visit at work, doused him with petrol and set him alight. While visually striking, I thought that the likelihood of Tate being able to just casually stroll out of the bank was a bit much. But then again, Larry had more burning issues (arf) to attend to than pointing fingers.

I thought the Constance subplot felt a little left-field. Naturally, I'm not going to argue with any storyline that offers up more of Jessica Lange doing what she does best (running the show, basically), but the entire ordeal regarding her possible incarceration felt an awful lot like padding. It was never going to happen, and was all just a convenient way of setting up Larry and writing him off. Still, that final scene where Constance once again asserts her cruelty like no other, by denying Larry an ounce of admittance that she ever loved him, was masterfully handled.

As for the horror elements this week, it was all fairly tame, wasn't it? Unless, of course, the idea of an infestation of flies terrifies you to your very core. The only memorable scene trickling into the horror category was the effective moment involving Violet finding her own corpse. And, of course, the startling opening segment, but other than that, there's not an awful lot here to satiate the gore-hounds. Larry does get a brief tender scene where he manages to say a goodbye, of sorts, to his dead family, but I found the poor make-up work distracting, taking away from any horror elements (it was a nice touch having ash fall away from his wife, though). 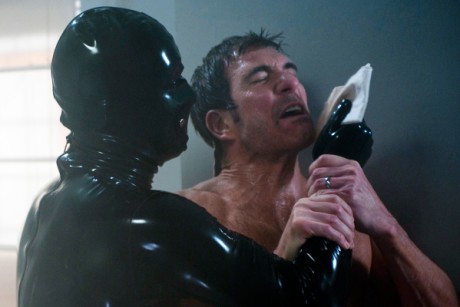 Overall, it wasn't exactly the most exciting hour of the show. Things sort of just play along as you expect, and the few twists that do come are either predictable or simply uninteresting. At least Ben and Vivien now have a compelling reason to stay in the house, given that their only daughter is forever damned to the place. As a plot device, I have to admit, it's the best yet for keeping everything together. Also, while the character has seemingly fallen to the bottom of the pile, acting kudos aplenty must go to Taissa Farmiga for her continued portrayal of Violet. It's not an easy role to play.

Alright, American Horror Story, let's get back to that scattershot storytelling you love so much. At least with that method, we're more likely to find a few gems along the way. Less crappy teens in love, more satanic babies prophesied to bring about the end of all things. The season is almost at a close, I hope that the series pulls out all of the stops and brings the full-on crazy that made it so worthwhile in the beginning.