It’s Hollywood 1925, the talking picture has yet to be invented.  Already this story is not the typical setting for a vampire story, but this is where American Vampires begins. Pearl Jones is a struggling actress that works three jobs to make ends meet. One of those jobs is as an extra for a movie. She and her roommate play slave girls. Throughout the issue, not only do you get the feeling that you are following Pearl through her daily routine, but that you are following her on the luckiest day of her life. After all, the story is titled, “Big Break.” Pearl is a strong character with a witty answer to every situation and you can’t help but like her. At the same time you can’t help but feel like something really bad is about to happen to her. On the day of her big break, she’s hit on by a musician at the club she works at.  The next day she can’t help but gush to her roommate about it.  Then, she’s picked to be the fill-in for the lead actress and talks with Mr. Hamilton, one of Hollywood’s top leading men. Taken with her charm and sharp wit, he invites her to a party that the producer is throwing. Everything seems like it’s on the up and up, until she’s given an ominous warning from a cowboy loitering by her pool.

This story is charming. It captures the golden era of Hollywood that so many people love and obsess about.  Scott Snyder (Nation X) writes a strong, beautiful and witty character in Pearl. Then, he surrounds her with a supporting cast that plays to those strengths.  So where are the vampires?  Oh, they’re there, but maybe they’re not quite what you think. Story is narrated by Pearl, and each of her narrations leads into the next scene of the book. This gives the story a very natural progression and smooth pace. Rafael Albuquerque (Green Lantern, Captain America) is frankly just brilliant.  He captures the era spot on, and never fumbles. His back grounds are rich with characters and movements, making the page seem alive. Dave McCaig (Invincible, Young Avengers) does a wonderful job of coloring the book and helping with the tone.  The book feels like a Vertigo book. That is to say there’s just something unique about it that only works with their comic line. 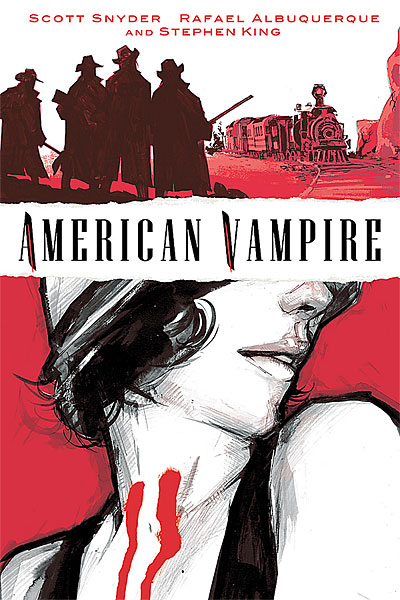 The time is 1880, and we’re taken aboard a train transporting the wanted criminal, Skinner Sweet. As is customary, Skinner is being taken to the state in which he’s wanted, and put on trial.  He’s not a nice criminal. He’s not robbing from the rich and giving to the poor.  He’s a thief and a murderer that allows his crew to rape while he murders. Yet, he looks a lot like the cowboy that was sitting by the pool of Pearl’s apartment.  One thing is for sure, this story does not have a happy ending.

Stephen King’s writing a comic seems like it should be weird. The truth is he has been heavily involved in comics since Marvel began adapting several of his novels. He’s able to write a wonderful story that adds to the prior tale without trying to one-up it. The back-up story is very similar to another Vertigo title, House of Mystery. The art team of Albuquerque and McCaig remain the same and continue to give the book that Vertigo feel, but something all its own at the same time. Whereas Albuquerque made Hollywood feel alive, he’s made Colorado feel untouched by man. Both stories complement each other perfectly and add to the lore of the overall story. Still, the question remains: Where are all the vampires?  Well, maybe they’re the business men or the musicians, or the cowboys. Maybe the vampires are just people in everyday life that prey upon people at their weakest.  Or maybe it’s the cowboy by the swimming pool.