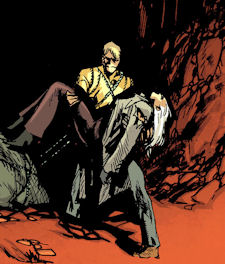 It's the last issue for awhile as American Vampire goes on hiatus, and man, does it ever succeed in leaving you waiting impatiently for the series' return. This single issue story serves as both an epilogue for what has come before and a teaser for what is coming next as Scott Snyder and Rafael Albuquerque check in with one of the characters who has been around since nearly the beginning, Abilena Book.

American Vampire's previous story arc, the Blacklist, had the feeling of the end of an era to it. Certain ongoing story threads were tied up with the deaths of two characters who had been around since the start. One of our two lead vampires, Pearl Jones, was left to start the next era of her immortal life while Skinner Sweet escaped his latest circumstance to start something new. I don't think Snyder and Albuquerque could have chosen a better point to put the series on hold, though I'd definitely prefer it to continue its regular schedule.

It's Abilena Book who brings this chapter of American Vampire to a close and readies us for the next. Abilena really is a central character to the series, yet she has appeared very little. She's the daughter of one of the men who apprehended Skinner Sweet in life, the lover of Sweet's chief nemesis James Book and mother of the partial vampire Felicia Book. She's tied into quite of bit of the mythology, but I think this is the first we have really been treated to her as a main character. What works so well about the role Snyder places her in here is that she is simultaneously a witness to most everything that has happened so far and, through exposure to a unique breed of vampire, witness to what hasn't happened yet.

Falling into the latter category is the Gray Trader, a mysterious figure whom I presume will be the new major threat when American Vampire returns to business. Snyder does a nice little twist with the characters introduction, pulling back just when you think you've seen the Gray Trader make her first move. Albuquerque really kills it with this scene as well, making him out to be one creepy figure without really giving much about him away. It seems the Gray Trader represents a breed of vampire we have yet to see, but I guess we'll just have to wait to get any answers on that front.

The big teaser from this issue is a double page spread, which is basically a big collage of snippets we can look forward to seeing upon American Vampire's return. Albuquerque does a fantastic job with it, but there really doesn't seem to be much for readers to deduce from it. Skinner Sweet, unsurprisingly, looks to be joining a biker gang. There's the return of a familiar vampire-hunting face. An ominous but unrecognizable figure or two. A standoff between two American Vampires. It is intriguing enough to leave me looking forward to things to come. I just wouldn't spend too much time scrutinizing the image for clues. It's the kind of thing that will make sense hindsight rather than foresight.

What really got me wishing for American Vampire's speedy return more than the Gray Trader or the teaser spread is the reveal of a mysterious and secret guest in Abilena's basement. The story holds back on showing us who it actually is, but it's certainly someone. I have my own suspicion on who it could be. He sure looks like another American Vampire and one who Abilena would take in and care for. To me, that suggests a certain someone who may not be as gone as we were led to believe. I could easily be wrong, but the potential of being right on this is pretty exciting.

Consider this a quiet season finale for American Vampire. The series isn't over, but we will have to wait months before getting new stories. I do wish the big teaser spread in this issue gave a little more meat to speculate on, but it's not like there isn't plenty of fun stuff to wonder about while waiting. Is that who I think it is in Abilena's basement? What could the Gray Trader be? What will the Vassals of the Morningstar be like when it's rebuilt with its new director? Where will Skinner Sweet and Pearl Jones end up now? Is this going to be the last appearance of Abilena Book? The "next season" of American Vampire really can't get here soon enough.