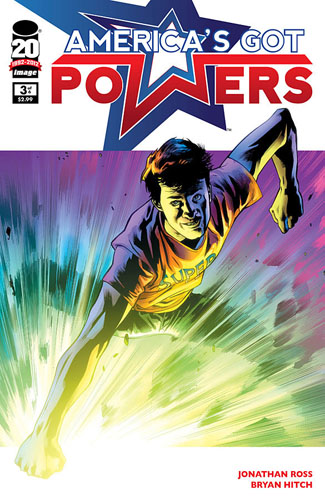 America’s got Powers is a six issue miniseries about a boy who was born during a time where everyone who was pregnant had their baby early and those kids received superpowers. Tommy is the only one born from this phenomenon that didn’t receive powers until now. This series resembles the Hunger Games a lot, but has its own twist to still make the series interesting.

The cover for this issue is pretty good. It had a lot of great colors showing that Tommy now has powers. I was pretty impressed by it. The only problem people may have with it is that it is very similar to issue 1 and 2’s covers. They may get confused if they haven’t picked up any issues yet because they are too similar.

In this issue, Tommy is put to the test. He doesn’t know how to use his powers, and what exactly his powers are. But Tommy is put into the arena with all the other supers for the government to see if he will be a valuable player.

I have been really enjoying this series so far. I tried this series at whim and I am glad that I did. It is very different from any other series I have read. It shows a what if situation of if there was a super powered teen generation that was controlled by the government. The America got Powers games may be entertainment for the rest of the country, but for the government it is their own personal science experiment to see what type of power level these kids have.

The story does have a couple surprises that will make you still interested to pick up the upcoming issue. Especially with this issue, you think that Tommy, the main character, is going one direction, but by the end of this issue you have no idea what is going to happen with his character. It brings a nice twist to the story.

My only suggestion is that you may want to pick this series up in trade. Since it is a mini series, and some times is delayed with its release dates it may have a better flow to read in trade.

The only problem I had with this issue was the art. Sometimes there is way too much going on in one panel. It is great that is really detailed, but it also looks confusing when you try to read certain panels.

I recommend you pick up this series either in trade or as single issues. So, far it is a really interesting story that always delivers. I can’t wait to see how this mini series ends in the upcoming issues.