Amethyst Gets a Stalker in Sword of Sorcery

Starting with today’s Sword of Sorcery #4 from DC Comics, Marc Andreyko will be writing a back-up feature starring Stalker, yet another character reimagined in the New 52 continuity. 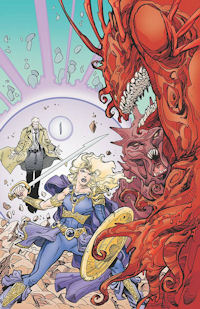 Don’t feel dumb if you have no idea who Stalker is. There’s very little reason for anyone to. Stalker is an obscure character who dates back to the ‘70s, when he starred in a self-titled limited series by Paul Levitz and Steve Ditko. He was an ancient warrior who lost his soul to a demon in exchange for power and immortality that he later found he was incapable of enjoying. There’s not much to Stalker beyond that. As I said, he was an obscure character who has appeared very little since then. Some fans may remember his most recent appearance in Gail Simone’s run on Wonder Woman.

Andreyko’s New 52 take on the character sounds like it will keep to the same soulless anti-hero premise. He will be joined by Andrei Bressan on art and promises a strong horror vibe to this particular fantasy story. Little about his plans for Stalker could be revealed without spoiling the story, though.

Andreyko is no stranger to horror and fantasy, having recently written the likes of Vampirella and comic adaptations of True Blood and Let Me In. But DC fans will be far more familiar with him from being the creator of the critically acclaimed Kate Spencer from Manhunter -- who is sadly one of the many female characters no longer around in the New 52. 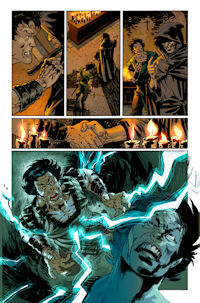 Stalker will not be Andreyko’s first contribution to the New 52. Today also features the final part of his story in DC Universe Presents in which he has reimagined Black Lightning and Blue Devil. I’ve particularly enjoyed his new take on Blue Devil. Honestly, it’s one of the better reimaginings that I’ve seen from the New 52 so far.

Here’s what has me curious, though. Marc Andreyko is going from a single story arc on DC Universe Presents to a back-up feature in Sword of Sorcery. Why is the writer of Manhunter being so underutilized by DC? You can’t tell me DC has no need for good writers right now. Andreyko may not have garnered any big sales success, but he succeeded at creating a popular new character for DC. Isn’t that exactly the kind of talent DC needs for the New 52?

This Stalker back-up is cool and all, but I can think of a half dozen current books at DC that could use a writer like him full-time.

Find the first part of Andreyko’s Stalker back-up feature in Sword of Sorcery #4 and the finale of his Blue Devil and Black Lightning story in DC Universe Presents #16. Both books are out today.