The cliché of an amnesiac protagonist has long been a staple of bad video game writing.  Plenty of games start out with the player awakening in an unknown place, with no name, no idea how he arrived there; the goal being to walk down the only available hallway and explore.  It’s a cheap way to tell the player “There’s no story, just run down the hall and kill everything”.  However, Frictional Games has taken this outdated idea, and built a brilliant story-based, intellectual game around it with Amnesia: The Dark Descent.

You awaken in a castle in 1839, with a short cut scene explaining that your character can only remember his name, and that a mysterious “Shadow” is hunting him. Very early on you find a note from yourself, explaining that it was you who gave yourself amnesia. As you explore the castle you begin to learn why, by uncovering pages of your own journal, as well as notes and letters from other persons involved in your previous adventures.  There are almost no other characters in the game, and you have to figure it all out without directly interacting with NPCs. It’s an unusual take on storytelling, and works very well for this particular game. The story as it is slowly revealed over about eight hours, is a gothic tale of terror and horror along the lines of Poe, Stoker and Lovecraft. 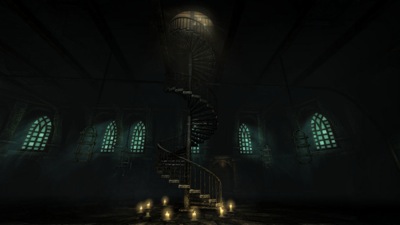 It’s hard to pin Amnesia down to a particular genre; it uses a 3d engine with a first person perspective, but there’s no shooting or combat at all (There isn’t even a HUD).  You do encounter horrifying monsters in a dark and creepy setting but, instead of fighting the enemies, you must use stealth, or just outright run away screaming.  The monsters in Amnesia are not to be fought, they are to be feared.  And you will be scared when you play this game, far more so than any zombie survival game you’ve tried.

The point isn’t to defeat the bad guys, but rather explore, solve puzzles and interact with the environment, which makes Amnesia feel most like an old point and click adventure (But creepier). The movement controls are exactly like a FPS, but the interactions with your mouse are more immersive.  Simply clicking on a door or drawer won’t open it. Rather, you have to swing your mouse to open a door, and gently slide backwards to open drawers.  When you need to smash a breakable object, there’s no attack button, you must left click on a heavy object and swing your mouse like your real hand.  Persons who played the Penumbra series (Also by Frictional Games) will recall this; and it adds a deeper level of interaction to the game, especially when you are running from monsters and have to fiddle with doors while in a panic. 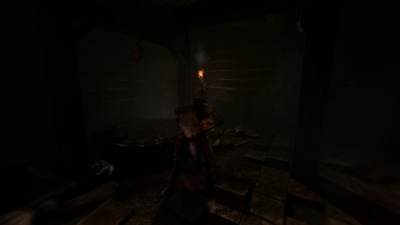 It’s filled with references to the works of HP Lovecraft, including dialogue about the “Impossible Geometry” of the otherwordly beings who pursue the Players.  In fact like many of Lovecraft’s characters who go crazy after witnessing unspeakable horrors Man was not meant to know, your character has a Sanity Meter.  When you witness something unsettling, or encounter an enemy, you start to loose your mind.  The way the game depicts this is through eery sound effects, blurred visuals, even the controls go wonky when you go completely bonkers.  The designers play some devious tricks on the player (Very similar to the Insanity Effects from the game Eternal Darkness by Silicon Knights a few years ago) and it’s actually rather enjoyable to go out of your way to become insane just so you can experience the effects.

The game is easy to complete, with puzzles that aren’t hard to figure out (A couple of them do require you to keep a very close eye on the environment, though).  When you die, you generally don’t have to face whatever killed you a second time, so the challenge level is quite low.  Trial and error gameplay, or being very cautious will get just about anyone through the game.  There are limited supplies, in that you need tinderboxes and lamp oil to light the darkness (Thereby staving off insanity), but these items tend to be a bit too plentiful.  Yet, Amnesia is to be played for the experience itself, rather than as an activity to be beaten. 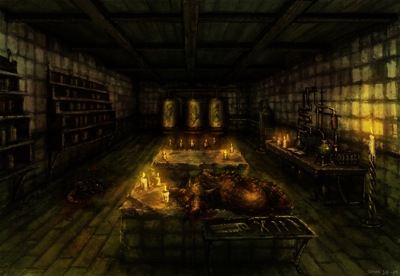 Obviously a first person stealth/ horror/ adventure game with no combat isn’t going to appeal to a lot of people.  Add to that, it’s completely inappropriate for children, and genuinely disturbing even to adults, and you’re looking at a niche game for people who like to try the unconventional. For the small subsection of gamers who are piqued, Amnesia will deliver.  It’s something not to be missed if you like being scared, and have a few nights to spend playing with the lights turned off after the rest of your family has gone to bed.

One feature that deserves further note is the “Custom Story”.  A mod kit has been released and players are encouraged to create their own adventures for Amnesia.  It will be interesting to see what sort of community develops and what they do with the basic gameplay.