By: | Comic Reviews | September 5, 2011
Hey everybody. Something you may not know about me: I'm a pretty big fan of the television series Angel. I mean, I am a fan of virtually everything that comes from the mind of Joss Whedon. Who isn't? When I started watching Buffy the Vampire Slayer way back when though, my favorite character by far was the original badass, but mopey vampire with a soul, David Boreanaz as Angel. Then he got his own show. So that was nice. Until . . . (Dramatic reverb) cancellation! Only through that most undervalued of media, the comic book, did these characters and stories live on. Angel and Spike saw their continuing stories published by IDW, while Buffy eventually got a new "Season 8" from Dark Horse that brought her and Angel back together again. That brings us to now. Buffy has a new "Season 9" series on its way and Angel is under Dark Horse once more with the new canon series Angel & Faith. So that's nice.

At the end of Season 8, Angel, possessed by omnipotent universe shattering bad guy powers, ended up killing everyone's favorite Watcher, Rupert Giles. In a state of shock and intense guilt, he is taken away by Faith, the Slayer who's no stranger to pariah-hood herself, to the flat Giles left her in Britain. This sets up the adventures to come as the two heroes seeking redemption use Giles's Watcher Files to right some mystical wrongs and generally be the good guys. Let me say right now that this is more or less my ideal premise. I have always thought Angel and Faith worked really well together and I have a genuinely large amount of affection for both these characters. It's been so long since Angel has been without his Angel Investigations team, I am really looking forward to a 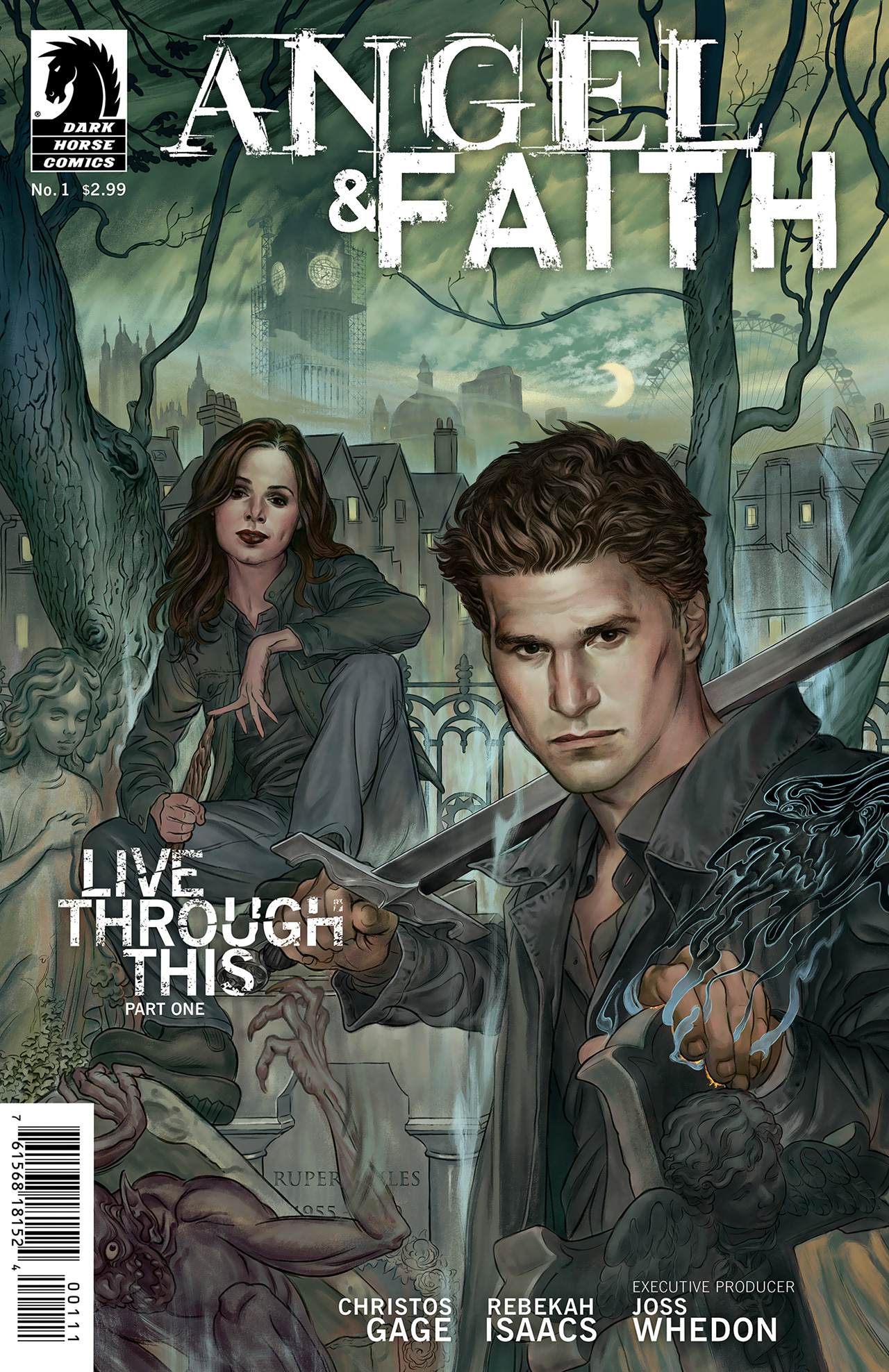 pairing that looks to be a little more personal than the all-star team ups Buffy and Angel have recently had on display.

Of course, the premise and the character and whatever else can all look marvelous on paper, but that doesn't mean that it's all going to be worth it when deciding whether or not to spend your money on a single issue. Angel & Faith #1 does not disappoint. Something that I'm always wary of with first issues, or any issue transitioning into a new plot, is that story and entertainment will be lost in the need to establish the exposition. Buffy Season 8 writer, Christos Gage, has managed to elude this pitfall by tempering the exposition with elements that are actually interesting, whether it be dialogue, cameos, or even just keeping certain plot points somewhat in the dark yet.

The story, first part in an ongoing arch, begins with Giles in the past, making a great sacrifice in the service of an innocent. This opening is incredibly effective. By offering a little insight into the mind of Giles, who he was and what he did, the weight of his death is much heavier when we arrive at the present. Angel's guilt at removing this man from the world becomes far more prevalent and the visuals show how much different Giles's approach was from that of Angel's and Faith's. They have a tough legacy to live up to. After this great opening, we are introduced to several more plot points that will most likely come up as the series continues. Villains are established, an old character makes a return, the seed of betrayal is planted, a mystery is afoot, and all of it is delivered with the witty dialogue that always makes happenings in the Buffyverse so much fun.

Rebekah Isaacs's art is a great accompaniment to Gage's script. Backgrounds are consistently detailed, placing the story in the dark streets of Britain, a noisy club scene, or a small domestic home. Action is kept to a minimum in this issue, but what is there looks great and I'm really looking forward to the monster designs and action scenes to come. Most importantly, the characters look like the actors from the show. With something like this, which relies so heavily on fans of the television series, it is really important to make thae visual connection strong enough that we feel like these are the same characters we've come to love. I definitely got that sense here.

The highest praise I can give for Angel & Faith #1 is this: It feels like a continuation of the show I loved. Angel and Faith are really back to continue their adventures and I could not be happier. Obviously, if you are not already a fan of the shows or the previous comics, then you are not going to have the same appreciation as a fan. Unfortunately, Angel & Faith #1 assumes that readers already have a fair idea of who these characters are and what their world is like. However, if you're willing to invest the time into finding these things out for yourself (All Buffy the Vampire Slayer and Angel episodes can be found on Netflix Instant Streaming and Buffy Season 8 is available in trade paperback form from Dark Horse Comics), then you'll find a comic that is even greater than the potential it represents. Let's go to work.
Rating
9.0