"Now you can stalk Isabelle in that posh new home you built for her"
By: Edward Oliveira | Wii-U Reviews | October 5, 2015
Animal Crossing has proven to be a wildly successful franchise for Nintendo, more so when you realize there have been only four games. When it debuted on GameCube (or N64 in Japan), it has evolved the simulation genre with real-time gameplay based on the system’s clock, a colorful cast and a different take on how to live a virtual life. It was only a matter of time until Nintendo decided to do a spinoff, since we’ve seen it with other series like Mario, Zelda and Kirby, and the game of choice is actually focused on something Animal Crossing fans wanted to do in the main games: decorate houses.

As a spinoff, it should be known that this is not a traditional Animal Crossing, and this has very little traditional gameplay of the series. Please don’t let that sound like a negative thing because Animal Crossing: Happy Home Designer is fun, contains a ton of hours of gameplay and gives you a new insight of the series.
That new insight is being an employee of the Happy Home Academy, something you may have seen before. This is where Tom Nook, Digby and Lyle work in Animal Crossing: New Leaf, and you become their newest employee. They, along with series newcomer Lottie, have you be in charge of remodeling folks homes and refurbish town buildings. Apparently experience be damned. 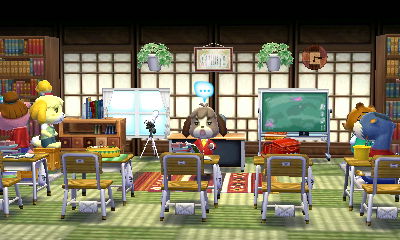 Those folks will either stop by the shop for help or you walk the town looking for folks needing a new home, and you’ll find a plot of land to settle them in, select the season and design the house inside and out. Later on, you get the ability to scan amiibo cards to unlock that villager’s request for a new house, and Animal Crossing mascot Isabelle will stop by asking if you could help rebuild old buildings like schools and shops. This is the core of Happy Home Designer.
You design these homes and businesses with the bottom touch screen by simply tapping and dragging furniture, fixtures and other indoor and outdoor items. Future buildings unlock other things to do within these walls, like adding ceiling fixtures or the ability to customize designs or colors onto certain pieces. While it sounds tedious, it’s very fun in a zen-like way. Between an easy-to-use interface, tons of options to decorate with and a great overall presentation to the game itself, there are not much better ways of chilling out at the end of a busy day than unwinding with a 3DS and fixing up a villager’s house.

And there will be plenty of houses to do in Animal Crossing: Happy Home Designer since the game supports almost every villager AND background NPC from Animal Crossing: New Leaf, which tallies to around 300 characters. These villagers can wander the city you work in randomly, but if there’s a particular one you wanted to see, you can scan an amiibo card of that individual… if you crack him/her. That’s because the cards, which are sold separately, are in random 6-card booster packs. The first series (there will be three total by the end) contains 100 different villagers, with five commons and one rare in each pack. The commons are characters you can unlock randomly, but the rares are the series’ most popular animals who act as background characters in towns from other games, like Isabelle, K.K., Resetti, or even your co-workers Digby, Nook, Lyle and Lottie. Those special folks are not unlockable by normal means, so to get everything does require more than the cost of the game itself (and if you have an older 3DS, the amiibo scanner accessory).
For 300 characters, that’s a ton of gameplay. It can take between 20 minutes to over an hour decorating a single place, depending on how OCD you are making sure everything is perfect. With the additional projects on top of the hundreds of characters, that could be well over 150-300+ hours of designing. And you can at anytime redo someone else’s house, so you can remodel once you unlock more options, which could add on even more gameplay. Like other Animal Crossing games, this isn’t a game in which you “beat,” so at any time, even years later, you can pop it in and chillax. 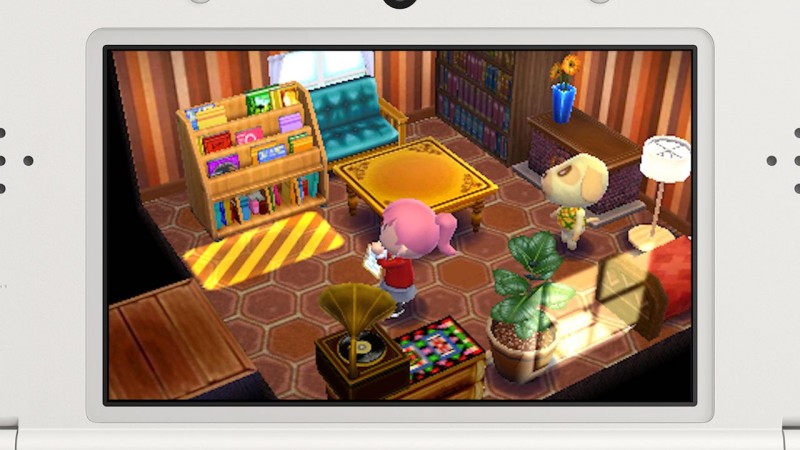 If there was one thing that felt off throughout the game, it’s that the town you’re helping flourish is not one you actively live in. Though it’s cool that villagers are digging your restaurant or going to your hospital (while saying some funny stuff), you have no takeaway since nothing is coming back to you or your home, because you do not have one. Even your coworkers live in the area since you have the ability to redo their homes, again if you have their cards. It’s strange that this Animal Crossing makes you feel like an outsider the entire time, which is the exact opposite of what the series is all about.
One nifty feature within Happy Home Designer is the screenshot-sharing feature. At any time, you can press both the triggers to snap a shot that’ll save in your 3DS camera roll. You can also take those shots and post them on Twitter, Facebook or Tumblr via the Nintendo 3DS Image Share. Unlike most games, Happy Home Designer redirects you from in-game to the web browser without much fuss. Miiverse was easy to use in New Leaf when they introduced the network to the 3DS, and it's just as easy here too to post drawings, screenshots and messages. 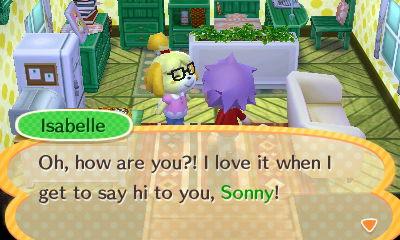 That’s not all in terms of sharing because Happy Home Designer has an internal social network called the Happy Home Network. Here you can post your finished projects and visit others’ works and interact with them as if they were on your copy. You can search for particular places (see my two designs below), view the most popular, find the newest ones uploaded, filter particular residents’ houses, or participate in the current contest. The interface is not only easy to use, the presentation behind it all is incredibly well done, especially when you think that this entire social network was built from nothing for just one game. Makes me wish Nintendo executed something classy like this with their own system menus. I’ll take Tom Nook golfing over a “please wait” screen anytime.
My 24/7 convenience store: 0703-7725-359
My Starbucks-like café: 0090-7724-354
Like other spinoffs like Hyrule Warriors, I hope Nintendo sees the differential of the gameplay to warrant putting some of it in the next main installment. If they include this extent of home decor in the next Animal Crossing, it’ll make designing houses so much easier and entertaining, plus we could potentially help build a town from scratch instead of moving into an already developed one. But enough of thinking of the future; with what’s on the cart, Animal Crossing: Happy Home Designer is a lot of fun for a spinoff that alters the viewpoint in the Animal Crossing universe. It lets us see what folks like Tom Nook and Isabelle do when they aren’t in their respective buildings waiting for that Mayor that isn’t returning, as well as afterhours in their new homes (they even have casual wear when they’re home!). I recommend it to anyone wanting an interior designing game, as well as Animal Crossing fans that want an AC experience different to New Leaf. 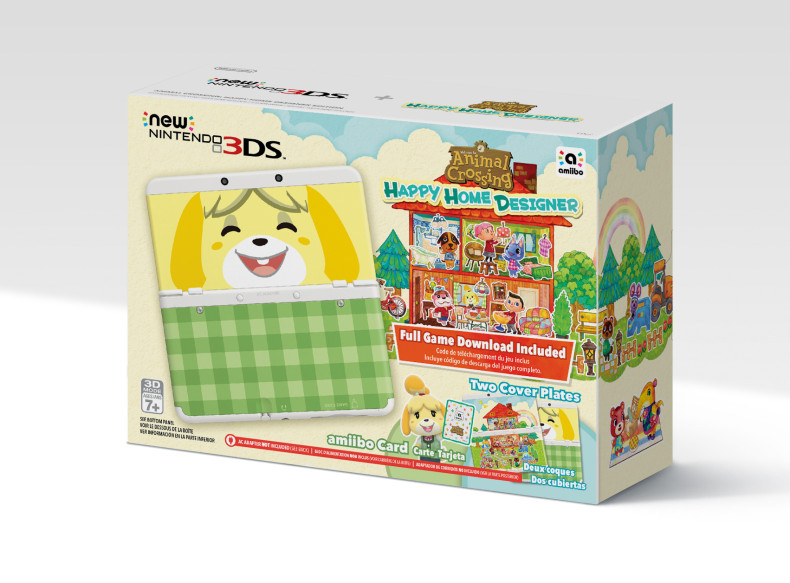 Bonus Review! New Nintendo 3DS
North America is in for a treat, because Nintendo listened to fans and decided to release the smaller New Nintendo 3DS over here, but only as a bundle. You get yourself the system, a digital voucher of Animal Crossing: Happy Home Designer and two faceplates: one based on the game’s box art and an Isabelle-themed one.
When they didn’t release this model, I decided to snag the Majora’s Mask model and have been very happy with it. The bigger screens were awesome, though the quality on it was a bit blown up, and it fit in my hands pretty nicely. My biggest issue with it however was that its body was too big and couldn’t fit in my pocket. After getting a Zelda pouch, I thought I had no issue bringing it everywhere, but after freaking a few people thinking that the leathery pouch was a gun holster, one being a cop, I realized that this wouldn’t work in America in 2015. When Bill Trinen announced the Animal Crossing Edition smaller New 3DS at the 2015 GameStop Managers Conference, I decided that it’s time for a reduction. 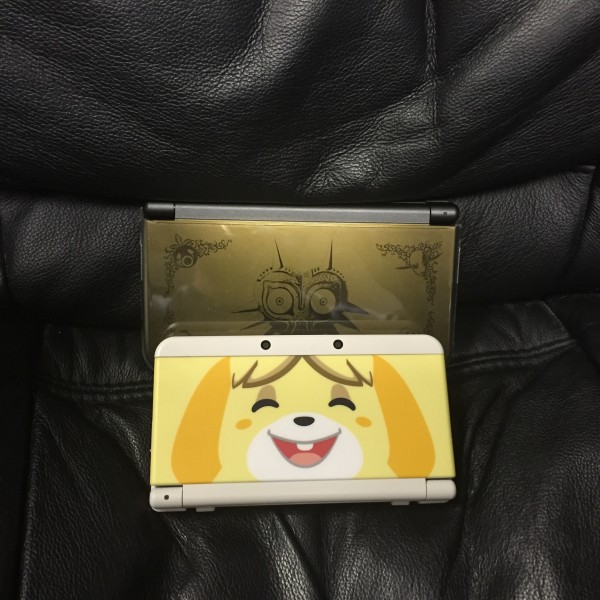 After owning and transferring all my stuff to the smaller 3DS, I actually couldn’t be happier. The system uses a much softer plastic that felt comfortable and lacked the slippery gloss finish. The colored ABXY buttons makes it a bit toy-like, but that’s because they are themed off of the Japanese Super Famicom. The thing is that means nothing over here since the American Super Nintendo had purple-hued buttons, so I wished they had something a little more mature for the button scheme.
My favorite thing about the smaller model is that the screen didn’t get that much of a reduction. The New Nintendo 3DS’ screens are slightly larger than the original 3DS and 2DS, giving a better compensation for system size and screen size. 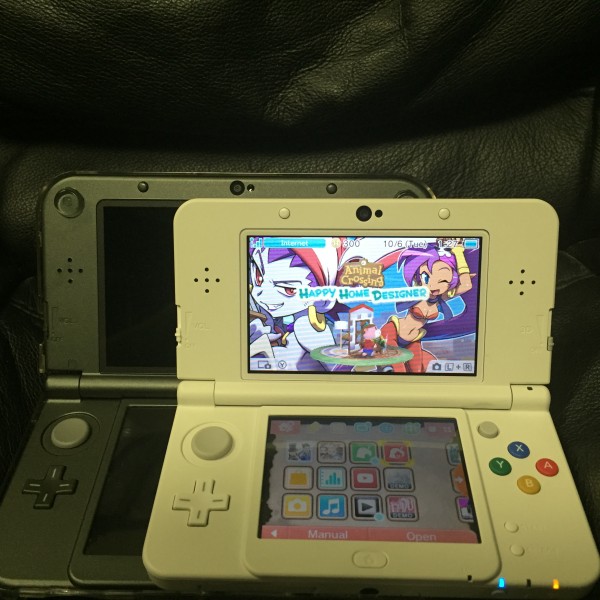 If there was a downside, the stylus with it is the smallest I’ve seen in a Nintendo handheld since the original Nintendo DS… the 2004 model. It’s awfully thin as well as short, and doesn’t fit in an adult’s hand right. It’s a weird design choice since the original 3DS opted for a much better (and super comfy) telescopic stylus to compensate for the lack of space. I’m also still not a fan of the cartridge and Power button placement, right at the hand area.
I had a hidden motive for switching this model and that was the ability to swap faceplates. While Nintendo loves to release limited edition systems, having faceplates nulls and voids the jealously of seeing these colorful and well-designed limited editions since you can make your own edition in 20 seconds. I have the two that came with the system, the Xenoblade one featuring the Monado and the chic black Legend of Zelda one. 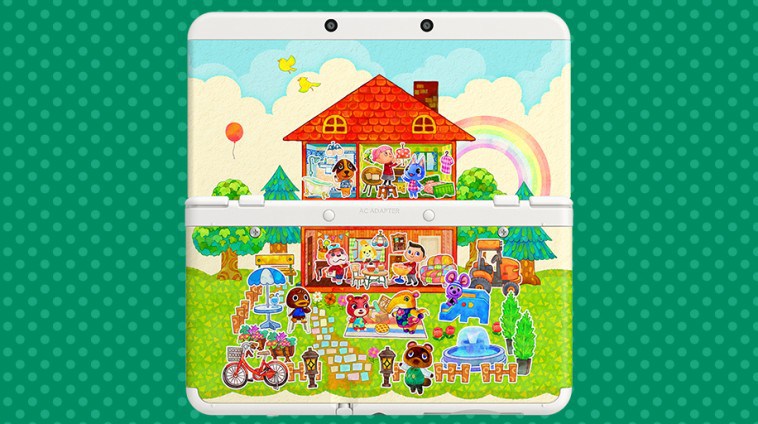 The house-themed Animal Crossing one hasn’t left the box the system came in because it’s a crime to choose that lame design over the diabetes-inducing, painfully adorable Isabelle one. With that big cheesy smile of hers on the top half along the nice green plaid design based on her shirt, it makes a great convo piece.
All the other upgrades of the New Nintendo 3DS XL: the better 3D, better processor, C-Stick, ZL/ZR shoulder buttons and amiibo support are all there. The only thing it doesn’t have over the XL is the battery life, which is about an hour less across the usage board than its bigger brother. 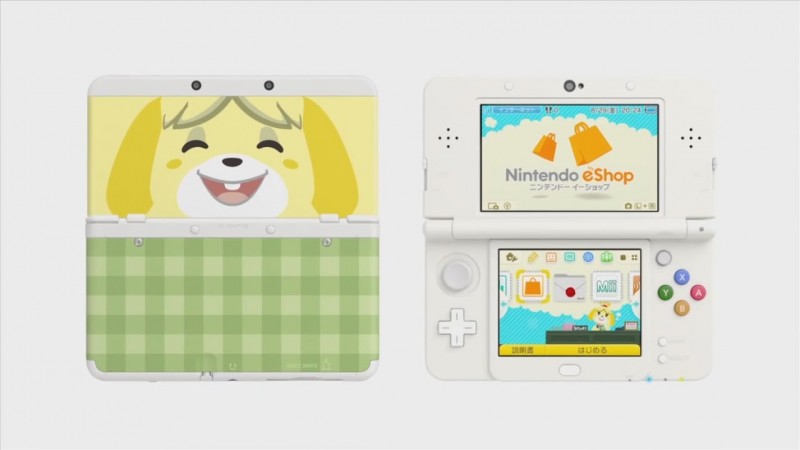 Because middle-child models of electronics rarely sell well, Nintendo opted releasing the smaller New 3DS exclusively as a limited edition Animal Crossing bundle for $219.99. That means you won’t have long to grab these before they’re gone. Even for the higher price, those who protested for this model should scoop one up ASAP. You can get the faceplates you want, either via Nintendo’s site or importing, and just accept the fact that you won to an extent. You won’t see it permanently on shelves, so don’t make the system look worse in Nintendo’s eyes by having it rot on store shelves.
Rating
8.2
Pros