In the coming weeks, the hit television series Breaking Bad will reach its sure-to-be dark conclusion as we approach the final eight episodes.  Walter White, in all his meth-peddling glory, has exposed a fascinating truth about the scores of fans, myself included, who are eager see what fate has in store for the infamous Heisenberg.  That truth is that people can get behind villains just as easily as they can get behind heroes.  In the real world, there’s no such thing as good and evil.  In reality, people are born, and depending on their experience and circumstance, they act a certain way.  Therefore, with the right motivations, you can rally your audience behind anyone, good or bad.  Comic books love to lean on the good versus evil dichotomy.  That’s not to say they have any responsibility to mirror the real world.  I would just like to see more anti-heroes out there.   So when that mould is broken, or at the very least questioned and explored, the way it most certainly is in Anti-Hero #1, my attention is gripped.

Callum Finney is just your average crook with a superhero problem.  When he tries to pull off a heist, Paragon shows up, costume clad with superpowers and all, to throw a wrench into things.  That is the dynamic we have come to expect between hero and criminal, until now.  Callum coincidentally happens upon Paragon changing back into his civilian clothing and decides to follow him.  He follows him to see his ex-wife Naomi, his children at school, to his job, and eventually back to his apartment.  That’s a lot of sensitive information for one career criminal to have on a hero whose identity is a total secret, even from his own family. 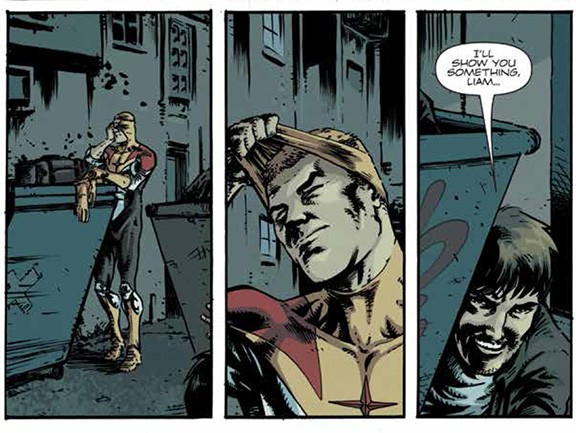 The beauty of Anti-Hero #1 is that it first establishes a world that is all too familiar to fans of comic books, but from a very different perspective.  In this world, you have your average superhero (Paragon), as well as your super villains, who tear up the streets and wreak havoc.  In the middle of all of this, you have your average criminals, the guys who typically don’t stand a chance against the costumed crime fighters, and who get overshadowed by flashier and more powerful evildoers.  That’s where Callum fits in.  Typically, Callum Finney doesn’t have a card to play when Paragon shows up.  What would happen if this normally powerless thug had a superhero in the palm of his hand?  Well, I highly recommend reading Anti-Hero to find out!

Jay Faerber, the writer, has in the past written crime stories and superhero tales.  He found that the readers of his superhero books don’t have an interest in his crime books, and vice versa.  He wanted to change it up a little and straddle genres, and he did just that with Anti-Hero.  With genres come expectations, and after reading this issue, expectation turned into anticipation.  Faerber anchors new material into familiar themes, and the result new and exciting.  The pacing, too, is excellent, as he manages to get right to the point of the story without having to compromise the deft character development.

Nate Stockman’s artwork is nostalgic for superhero comics.  The bullets go “BBRRAPPP,” as they ricochet off of Paragon’s person, rubble flies about as Jackhammer (super-villain) throws concrete boulders, and all other action is vividly displayed in that typical loud and chaotic fashion.  Paragon's headbutt looks both fast and painful.  Additionally, the story is told as effectively through images as through words.  When Callum is small, down-and-out, and insignificant, he looks it.  When he's got something up his sleeve and finds himself, unexpectedly, with lots of power, the chip on his shoulder shows.  Henry, Paragon's alter-ego, is a meak and clumsy man--or so the world believes-- and the deer-in-headlights expressions that Stockman manages to render capture that perfectly.


Who will triumph in this game of wits?  Will Paragon do Callum’s bidding?  Will he become “bad?”  How far will he go to protect his identity, and therefore his family?  How much can an unbreakable man bend?  Anti-Hero #1 raises these questions and more, and I intend to keep on reading to get answers.  Jay Faerber and Monkeybrain Comics have me hooked!