And I thought the last episode was awesome. "A Going Concern" is one of the best Archer episodes yet and that is saying something. In a way, this episode should have been the season premier as Archer discovers the microchip that was planted in brain at the end of last season. After this revelation, Malory reveals that she has lost all of her money in a Ponzi scheme and planes to sell the company to O.D.I.N so their director can marry Malory. Archer has to stop the deal to keep his Mother (and his job).

Prepare yourselves, it’s about to get convoluted. To get the position of top dog, Lana has to sleep with Barry, Archer’s old nemesis. Krieger has to preform brain surgery on LSD and Pam has adopted a Rastafarian persona with no given explanation. Never has an episode of an animated series been set up so well for hilarity.

This episode is another examination of Archer’s pseudo relationship with his Mother. If we weren’t getting this sort of episode every now and then, Archer would become completely unlikeable. It might come off to some as a cheap trick, but it literally is the only thing that makes Archer a relatable character because you realise he’s so messed up because of Malory. 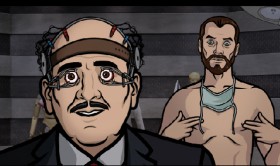 Getting back into the episode, everything worked so well. All of the best humor from the show comes from being a more dysfunctional and sex crazed version of the office. Some of the best jokes come from the stuff aren’t really jokes. When a character talks over another one with a little aside to themselves can have you burst into laughter more than something that is closer to a blatant joke. Pam’s new stoner persona (see what I did there?) had me rolling on the floor every time she was on screen. I had to pause the episode because I was laughing so hard. If they had explained it, it would have ruined it.

Another thing that made the episode was Krieger. Krieger got the shaft last week, but he’s back and on LSD. The scene with him doing the Clockwork Orange style brainwashing sequence and he can’t help but rub his nipples instead. And his pet rabbit named rabbit cline (okay it was Archer’s idea but that was a call back to the first episode).

Look, next to Community, Archer is the funniest T.V. show on the air right now. FX is the best network on T.V. Watch Archer as much as you can. Keep this show on the air. Don’t doom it to the same fate as Terriers.