This week Archer takes on illegal immigration in the only way Archer can. “Coyote Lovely” played with familiar stereotypical treatment of immigrants, to later subvert typical portrayals of such characters (Catholic, rosary-carrying Lupe, is also kind of a badass with a gun). Though the bulk of the immigrant characters didn’t have much to do in the overall story, Archer’s dialogue in those scenes was full of great political incorrectness, such as: “Not to sound racist, but we all know who the terrorists are” and “Can you escort us to a hospital? I bet about three of these women are about to give birth.”

These statements would be deemed offensive or insulting in many contexts, but the show manages to get away with it (like it has done so many times) because it is told through the character’s subjectivity. Using Archer as the mouthpiece allows the writers to comment on the way we view and react to an issue like immigration, no matter how offensive or ignorant the reaction is. 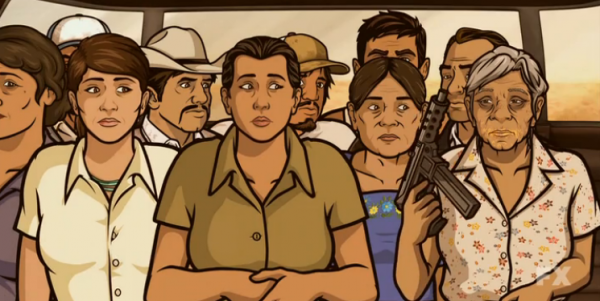 The writers also played with audience expectations; certainly the liberal Lana would be a supporter of our Mexican friends, maybe not. It was a nice twist that Lana be the staunch advocate against illegal immigration since she often leans to the left on most all political issues. It is surprising as we often see her as the more logical and even-headed person over at ISIS, but her disregard for the immigrants’ situations was well done, especially when discussing the group of immigrants stuck inside the stranded truck. Her retort, “Well, I’m sorry but if we let them out then, boom, they scatter” was hilariously insensitive. Archer’s “To where?” referencing their location was a great comeback. It is Archer who becomes Lana’s strongest challenger and questions her reasoning, “How does a Lorax-blowing tree-hugger like you anti immigration?” In this argument it is Archer who takes on the more compassionate and sympathetic side, a departure from what we have previously seen. Usually it is Lana who is trying to insert some kind of humanity into Archer’s insensitive and uncaring way of thinking. This was an unexpected, but well executed reversal. Essentially, the writers were able to ultimately appeal to both sides of the argument and deliver a pretty ambiguous and unbiased view of immigration for the episode. It didn’t feel like an over-politicized piece of satire, which it could have been quite easily.

The episode dealt with one of Sterling Archer’s greatest vulnerabilities, hot women. Whenever the ISIS team goes on a mission that involves any kind of hot lady, it is a given that Archer will be distracted and preoccupied with trying to get into her pants. We know Archer will do this, his co-workers know he will do this, so does his mother, who uses Archer’s weakness to her advantage for her selfish reasons. His behavior is so predictable that Malory manipulates an elaborate scheme in order to gain funds to be able to remodel her office. Again we see Archer being duped by a pretty woman in order to do her bidding. Just a couple of episodes ago we saw him being used and manipulated by Katya, only to have his heart broken once more. Oh Archer, how many times are you going to fall for the superhot babe who is clearly using you for her own ulterior motives? A lot, apparently, with Archer’s complete inability to learn from any of his experiences this scenario could repeat itself indefinitely. 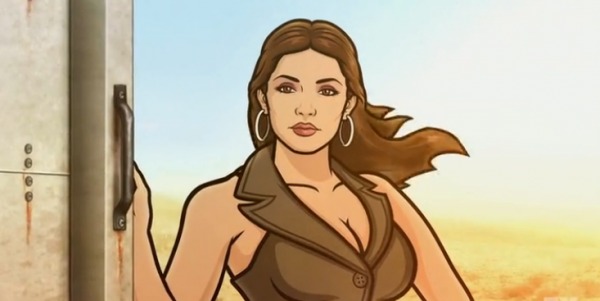 Last week, I wrote about the repetitive use of a specific plot point, this week’s episode suffers the same predicament. As stated before, we have seen this kind of situation pan out many times in previous episodes; Archer sees a hot chick, Archer wants to bone the hot chick, Archer disregards his responsibilities in order to bone said hot chick. It is a familiar situation, but like last week’s recurring storyline it doesn’t take away the entertainment value of the show. Each time the writers bring up or highlight Archer’s inappropriate behavior, it just reinforces the idea that the characters have no interest or ability to grow as people. They will forever be making the same mistakes for our viewing pleasure. It is fun to see the variety of ways that history could repeat itself, and as long as the jokes that accompany the story are fresh, then there is nothing really lacking from the show as a whole. Plus, Archer is a half-hour animated comedy; it is not a nuanced, narrative driven program like Mad Men or Breaking Bad, so it can afford to repeat a few storylines here and there, as long as it is funny.

The episode was well paced and thoroughly entertaining. Although it didn’t live up to last week’s awesomeness (that episode will probably remain a highlight for me for the rest of the season) it had its fair share of running gags and rapid-fire comedy. The autism joke alone made the episode worthwhile, it totally makes sense that Archer would have Asperger’s or some other kind of mild autism, it would explain so much. The voicemail gag coming back to bite Archer in the ass was long awaited, but it fell a little flat. That running joke has built up such anticipation through the run of the series that I expected something much bigger; still I don’t suppose the voicemail joke to disappear after this episode. There was a definite lack of Cheryl and Pam, their scenes were just adequate, not enough of the disturbing humor that we’ve come to expect from them. 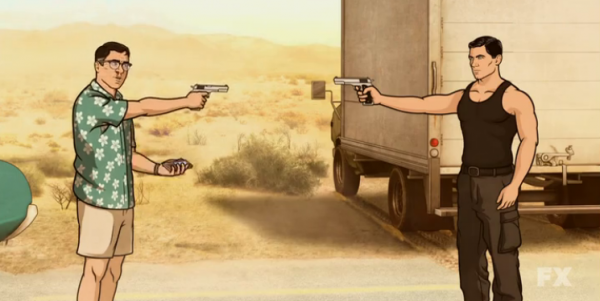 - Moments of realization for Lana and Archer. Lana finally recognizing that her job basically consists of babysitting Archer, and Archer’s realization that he might in fact be autistic were both very funny and voiced by the actors. You could sense the genuine surprise in the characters.

- Did this episode air out of order? It was mentioned in an earlier episode (I think “Once Bitten”) in the season that Malory had killed Bilbo, and then we actually see it happen in this week’s installment. Maybe the order was switched around so we didn’t have back-to-back episodes of Archer being in medical peril.

- Cyril grew some balls, temporary ones, and actually stood up to Archer. Seems like he is finally growing confident on his on-field work, he did drop the fake baby though, so there is still little hope for him.