When Archer kicked off its fourth season with a Bob’s Burgers crossover, it was a pleasant surprise to see the Archer writers acknowledge H. Jon Benjamin’s other fantastic animated role and take advantage of the dichotomous nature of his two leading characters. It was great to hear John Roberts reprise his role of Bob Belcher’s zany wife, Linda, and while it was absolutely hilarious to see Tina, Gene, and Louise represented in all their Archer animation glory, the wonderful voice acting by Eugene Mirman, Dan Mintz, and Kristen Schaal was certainly missed.

The latest episode “Sea Tunt: Part 1”, which is essentially the first half of the season finale, became another treat for Burgers fans, as Eugene Mirman and Kristen Schaal both guest starred as Cheryl’s brother, Cecil, and his girlfriend, Tiffy, respectively. Their appearances were indeed welcome and added an extra layer of comedy to those familiar with the FOX show. 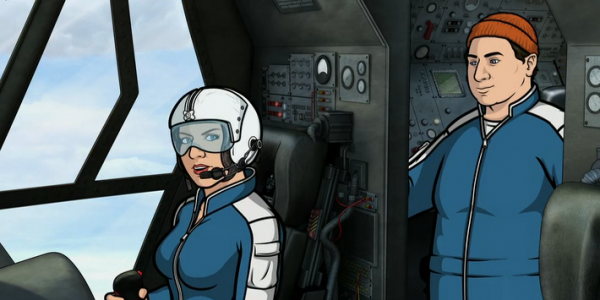 Hearing the voices of siblings Louise and Gene play a romantic couple definitely enhanced the comedy and introduced an underlying incest-y vibe to the relationship. Albeit, having such recognizable voice actors was a bit distracting at times. Eugene Mirman’s voice was slightly different than how he sounds on Burgers, but Kristen Schaal always sounds exactly the same and on some occasions it was hard not to picture Louise saying that dialogue and really separating the two characters (especially in the scene where Cheryl barges into the cockpit). However, the episode did not suffer significantly because of the familiarity, and audiences unaware of the mini Burgers reunion were not deprived of specific jokes or references.

In “Sea Tunt: Part 1”, with the help of Cheryl’s brother, Cecil, the ISIS team make their way to the middle of the ocean in order to recover a sunken hydrogen bomb. The premise confines the characters into a very limited setting and also limits the possibility for action. Not much happens in the episode in terms of action, there is no big antagonist to fight against, this is just the preamble to their mission, there is no huge conflict until the very last moments when Cheryl goes berserk and is hell bent on crashing into the ocean. Instead, the episode consists of a series of stories that feature few of the characters (almost like each character got his or her own B-story), along with little moments or snippets of the characters interacting with each other. Cecil goes character to character inquiring about Cheryl’s behavior; Lana acts as the moral compass attempting to convince the team of the ethical sketchiness of the mission; Archer gets trashed as per usual, Pam goes to town on the all “vegan/soy bullshit” seafood buffet and suffers a severe allergic reaction; and Cheryl runs around being all paranoid about her brother’s intentions. 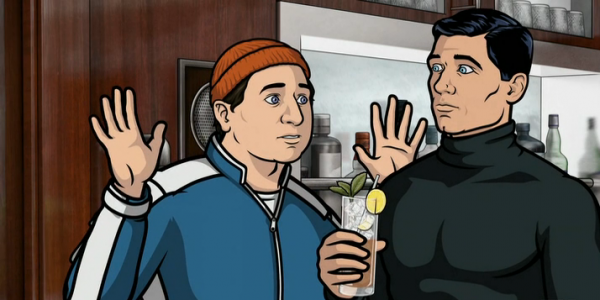 There was so much going on in this episode that it ultimately became muddled and all over the place. It wasn’t an entirely successful narrative structure, that’s for sure. It could have done with one less subplot, and maybe a strong running gag to hold it all together. We got little stories that lasted through the episode (Cheryl’s paranoia, Cecil’s questioning, etc.) but they were not developed enough because of all the other plotlines within the show. Archer’s nonsense at the bar could have been sacrificed for the benefit of Cheryl’s story, because seriously, its not like we have never seen Archer get wasted on a mission or on his way to a mission, or on every other episode.

Plus the writers didn’t even attempt to put a new spin on the Archer drinking on the job scenario, which is consistent with the character, it nevertheless becomes repetitive and commonplace. Even Pam knowingly eating the harmful food felt a bit “been there done that”. That is not to say that these moments weren’t funny at all, Archer’s adroitness at cocktail making and Pam’s ferocious appetite will always be humorous. 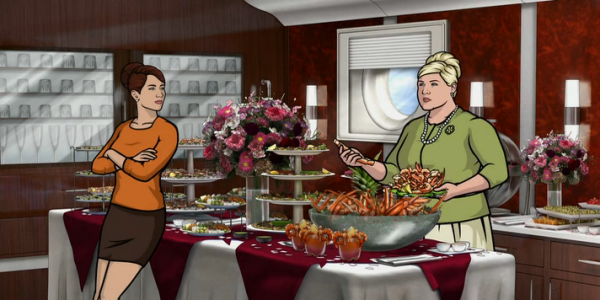 Overall, Cheryl had the most active role in the episode and therefore the most interesting and entertaining plotline. Which is why I would have liked the writers to have made it the focus of the episode. For all the idiotic things Cheryl has done and will continue to do, she possesses an uncanny ability to intuit people’s inner workings (remember that time when she articulated Lana’s inner thoughts to a T?).

That's probably why she knew right away that her brother was after her inheritance. Was she acting irrationally and paranoid? Yes, but ultimately her suspicious thoughts turned out to be correct and though her retaliation to her brother’s scheme was insane (crashing down the helicopter to destroy the tapes) it was totally within character and hilarious. She is a curious character that Cheryl, never ceases to surprise. I got a kick out of her ability to hear the show’s soundtrack and musical cues, it hints of her insanity and also her keen awareness of her surroundings (she is the most enlightened character, perhaps even aware of her existence within a TV show). More Cheryl wackiness and a greater concentration of her story would definitely have made this installment a much more successful episode.

Perhaps the episode comes across as a bit disjointed because it is essentially a two-parter and seen along with its counterpart the many storylines would not seem as thrown together as they do now. Hopefully the show can pick up from here and provide us with a great finale next week. 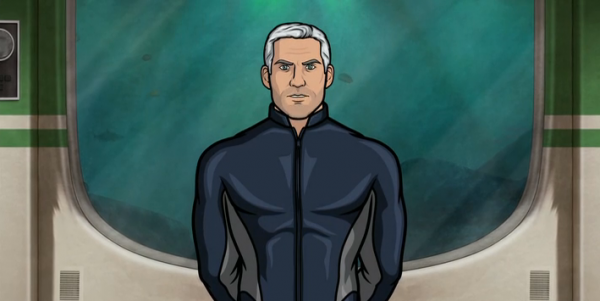 Notes & Quotes:
-- Nice twist in the end with the nod to Sealab 2021, the Adam Reed produced Adult Swim cartoon. Pretty sure that was Mad Men’s Jon Hamm voicing the part of Captain Murphy.

-- Cecil’s charities: Children Without Plates, Doctors Within Borders, Nourish a Child, Shoe a Child, Bespectacle a Child, One Laptop per Child Soldier

-- Cheryl has apparently always been insane, as seen in the brief flashback of her burning down a gazebo as a little kid, or at least fascinated with fire/danger. More Cheryl flashbacks please.

-- “Because you look fierce!” Ray’s reason for camouflaging Cyril’s face.

-- Have we ever seen the whole ‘Cheryl is a werewolf’ stuff on the show? I don’t recall, but it sounds awesome.-- "Oh, put another man's penis on it."