The season four finale of Archer was an appropriate ender to the highly uneven season. Exhibiting just a few highs, some significant lows, and a slew of consistently average episodes, season four felt considerably underwhelming. Don’t get me wrong, Archer still remains one of the best animated series out there, easily surpassing staples like The Simpsons and Family Guy (which have grown stale with time), and an average episode of Archer is still superior to most of the half-hour comedies currently airing (animated or live-action). But when compared to the first three magnificent, definite faults can be appreciated.

The finale started off as an average episode with amusing gags, but nothing extraordinary to really set it apart. The second half, however, definitely picked up and the episode gained the ‘finale’ quality that we have come to expect from the program. While not surpassing the greatness of previous season finales, especially season three’s “Space Race” (which is probably the most successful season ender), “Sea Tunt: Part 2” was a great combination of fast paced and dark comedy as well as genuinely heartfelt material. 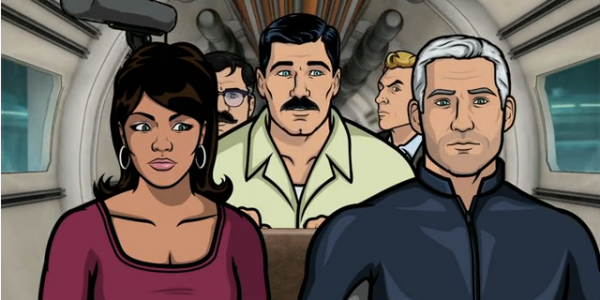 Through the season there has been an occasional focus on Lana and Archer’s tumultuous relationship. This character dynamic has been explored since the very first season of the show and has remained an important and often visited story arc throughout the series’ run. The more recent exploration of this specific character dynamic turned out to be significantly tiresome and even irritating as the season progressed. Lana and Archer were stuck in this perpetual antagonistic back and forth in which Archer would taunt her with the prospect of romantic love and more often than not Lana was reduced to a pathetic lovesick woman who let Archer get the best of her. Much of their interactions this season were a bit too ‘rom-com-y’ to be truly successful, especially for a show as characteristically subversive as Archer. Yet, while there is no denying that the writers could have handled some of the Lana/Archer material more deftly, or at least held off on it every once in a while, the prominence of their storyline was paid-off in the finale.

All season long we had witnessed Archer be a complete ass to Lana, as usual, but when he learns that she is pregnant, he is willing to sacrifice his safety over hers. Now, we have seen him be protective of her and rescue her from peril every once in a while, but this is, by far, the most selfless act he has ever committed. For a character that is driven purely by his selfish desires, this is a pretty big deal. Not only that, but he also finally confesses his love for her, sure he was on the brink of death and the possibility of not having to own up to his statement was fairly high, but he still said it. Archer’s earnest reasons for giving Lana the scuba gear and professing his love for her were surprisingly touching making for uncharacteristically tender scenes, especially for the series (props to Aisha Tyler for really conveying the emotion in her performance). However, it totally worked because the writers expertly offset the emotional scenes/moments with ridiculous comedy, such as Archer making fun of Lana’s choice of words as he drowns, “Phrasing!” 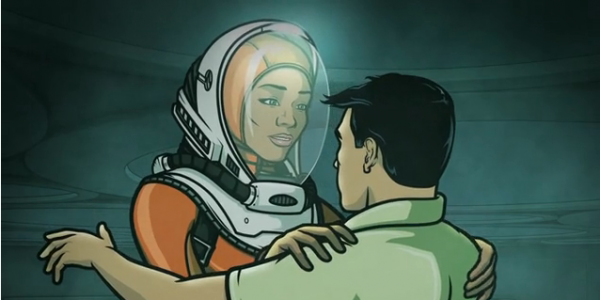 I don’t know if the writers are completely justified for giving us so much Lana/Archer material earlier in the season in order to build up to the finale. The conflict between the characters certainly provided context for the episode and a clear background for the characters’ turning points, but ultimately affected the quality of some earlier episodes. Maybe they had Lana appear so weak against Archer so she could pull a Han Solo on him in the finale, and show a kind of role reversal between the two, while it was fun to watch Lana be a badass again, it didn’t entirely make up or her weird characterization earlier in the season.

Apart from the more dramatic moments of the episode, “Sea Tunt: Part 2” contained a lot of fantastic material. The return of long running gags like “Danger Zone” (Archer doesn’t even feel the need to come up with clever phrases anymore), Cheryl enjoying some delicious rubber cement, and the return of the “old gypsy woman”. The best-executed running gag was Archer’s giddiness and insistence that he control the vehicles they travel in, in this case the DSV. We’ve seen this joke several times, most notably in “Space Race” in which he insists on landing the shuttle and clumsily takes the wheel only to crash the ship into the ground. In this episode, we see the DSV from the outside as it awkwardly makes its way into the water, as Cecil puts it “mildly inauspicious.” The best part is hearing the disembodied voices of Lana, Cyril, and Ray trying to hold Archer back from selfishly taking over the controls. Such a great way to pull off a familiar situation, we’ve seen Archer do that move so many times, but seeing it from a different perspective kept it fresh, otherwise we’d be just watching the same gag over and over. 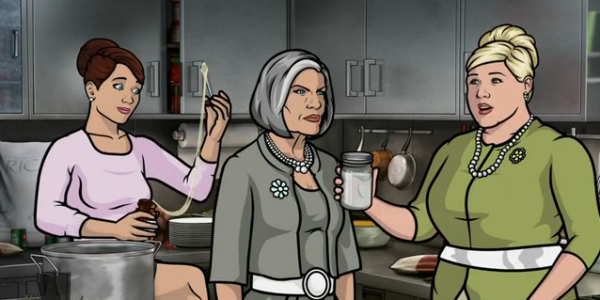 Archer’s unbridled enthusiasm and overall recklessness on the job, again endangers the safety of the group as he carelessly shoots at the glass wall of the Sealab to no one’s surprise. This leads to probably the most darkly comic and disturbing moments of the installment, in which a soda machine crushes Captain Murphy, pinning him down. He describes the state his body is in because of the incident with graphic, disturbing detail, “I just felt my spleen slip out of what was my anus.” It is so disgusting and wrong, but uncomfortably funny in a very, very sick way. Few shows will employ this kind of humor; we can appreciate Archer for being one of them.

The narrative structure of the episode follows traditional A-story, B-story storytelling arrangement, unlike the previous installment, which was a kind of mad jumble of disparate plot points. The simple story construction felt much better than last week’s as we got much clearer storylines/objectives and resolution to the situations featured. While the ISIS agents were at the Sealab trying to stop Captain Murphy from executing his missiles, Pam, Malory and Cheryl stay behind on the ship. They didn’t have much to do in the episode but were used to provide some of the random and quick comic moments so familiar to the show. Malory going around every room in the ship looking for booze was particularly funny, simply because it is easy to forget sometimes how much Archer is like his mother, how much he takes after her. We know him to be this highly functioning alcoholic, boozing his way through missions, but his mother was doing that years before him.

Season four ended with one of its stronger episodes of the season, appropriately so. Though season four in its entirety wasn’t as successful as past seasons, there were still some gems in this group of episodes, amongst them: “Once Bitten”, “Live and Let Dine”, “Un Chien Tangerine”, and “Fugue and Riffs”. Still, the future for the series appears to be promising, the show has already been picked up for a fifth season and narratively it will be interesting to see where the writers take their characters. Will Pam be promoted to field agent? Will Lana have given birth by the time we come back, or will they have her running around on missions while pregnant? Has Archer reached a point of self-awareness in which he won’t regress? Probably not, but we can look forward to the many possibilities. 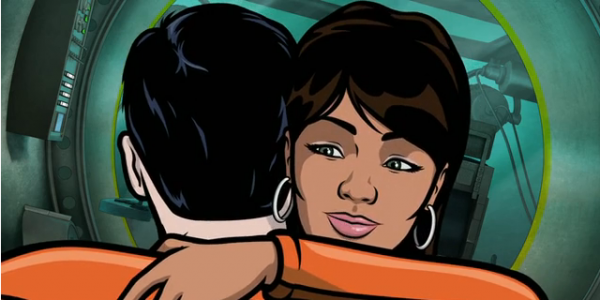 Random Thoughts:
-- The Lana pregnancy reveal was hinted at so strongly through the episode I doubt it was meant as a surprise for the viewers, but as a way to show how absolutely clueless Archer, Ray, and Cyril are to any kind of female problems/issues, etc. They’re idiots.
-- I had previously expressed frustration at the writers’ treatment of Lana, how they were too often utilizing her as a damsel in distress for Archer to rescue. So glad to have those roles reversed for the final episode, it was a long time coming.
-- Ray’s back in a wheelchair, poor guy.
-- The animation was absolutely beautiful, as usual. I can't get over how great some of these sequences end up like. All the underwater scenes were done wonderfully, the animation team is doing a wonderful job.
-- This: 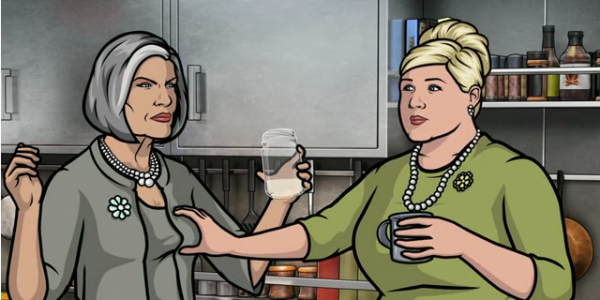