Tonight’s Archer was… wow. Never thought that Archer of all shows would go to cancer as a storyline subject matter. Thankfully, the episode works like gangbusters and delivered an amazing progression of Archer's character, but gave us huge laughs every couple of minutes... hell, every couple of seconds. If you’re reading this and you just so happen to work on a NBC show called The Event, pay attention to this episode and this review and maybe you’ll learn what real character development is.

What I’ll say right off the bat is that Archer has become the animated version of Community. They’re taking the tropes of cliché t.v. shows and turning them on their head, showing you just how stupid they are and what would actually happen. This episode starts off with a cancer scare for Malory with everyone in the office jumping up to offer help. Immediately Pam bursts the secret to Archer and of course he reacts badly. But instead of fretting over his mother, he immediately gets himself checked for male breast cancer (which I didn’t actually know men could get) and if you believe in karma you know straight away he’s going to wind up being the one with cancer. 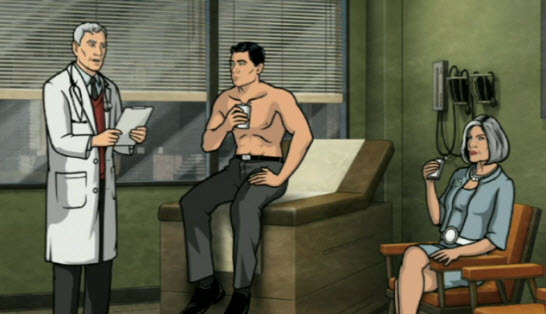 Over the course of the episode, we see Archer go through some strange emotions (like peace) as he goes to his co-workers and actually acts human for the first time that we’ve seen. We see him apologize for things we’ve actually seen him do and not stuff that happened off-screen (flashback to the scene of him beating the snot out of Pam with her dolphin puppet from the pilot). Bonus points for continuity right there. I think my second favorite scene of the episode was the photo montage of Archer on vacation with Woodhouse’s brother (although, there’s a point where you have to wonder who’s taking those photos). It’s been done, but the stuff we see them do is what was fresh. You know that’s what guys actually do in Vegas. It was a gutsy move for Archer to pull, even if he is a cancer victim, but he redeems himself with a long overdue apology to Woodhouse for his entire life and even promises to fix his attitude towards him. It was heart-warming and hilarious. My favorite scene of the night was the finaI scene with the constant phone calls and red herrings. It takes everything that I hate about dramatic plotlines that involve cancer and pretty much tears it apart. I almost forgot to mention the scene where we find out that Archer tattooed his “son” Seamus with his name and he got "Seamus" tattooed on his back. It was sweet, but it was sick and you know that it’s something that Archer would do. I loved it. I hope Seamus keeps the tattoo.

It would be a crime not to mention the hilarity that goes on with the side characters as we see every week. Pam was on fire with every little thing she said. Whether it was her catchphrase or her obsession with Lana’s breasts, it was really funny. Who knows, she may even overtake Krieger as my favorite side character. Carol is being her usual psycho self and Cyril continues his run as the straight man and punching bag for Archer… and I mean that literally this week. It’s the best ensemble cast on television. All of these characters play off each other flawlessly and the voice actors nail every single line, especially H. Jon Benjamin as Archer.

In the end, this was a tricky episode to pull off, but in typical Archer fashion, we’re given gold. I don’t know how long they’re going to keep the cancer thread going, but I hope it has some kind of lasting impact. I know they’re not going to kill him off, but he should probably still try and be nicer to his co-workers. It’ll open up new forms of humor they can work with to keep the old stuff from getting stale. Now if you excuse me, I have a doctor’s appointment (fingers crossed).