Last week we saw Pam asking for a position as a field agent and pleading to Malory for the opportunity, the prospect of Pam becoming a field agent seemed brilliant not only for the narrative in the fictional world (Pam is an overall badass who has all the qualifications to become a competent agent) but also for the show (who doesn’t want more Pam, especially when she gets to be in crazy scenarios with the other ISIS agents.) So, the writers didn’t waste any time trying to build anticipation or teasing the audience with the possibility, instead we got to see Pam in all her field agent glory right away.

Having Pam Poovey become a field agent might be the best decision the writers have made in the recent history of the show. She is definitely a welcome and much needed addition to the field team. It was really starting to get irritating and annoying having to watch Lana and Archer have their own romantic comedy banter and argue their way through mission after mission. The focus on their relationship this season was getting increasingly tiresome, so anything that would affect that in any way and change up that monotonous dynamic was absolutely necessary. 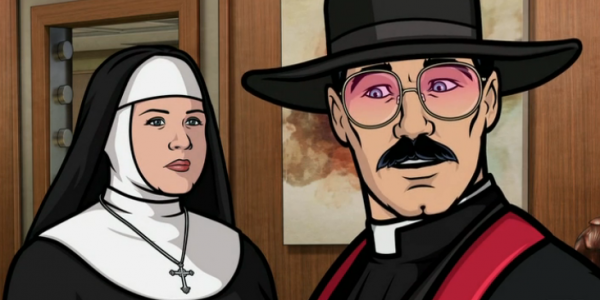 Pam (and Woodhouse, for this episode) invade that situation breaks the monotony of Lana and Archer’s interactions while still allowing the likable aspects of their work relationship to emerge. So we still get Lana and Archer argue about who is agent in command, or what kind of weapons the Swiss Guard carries, which is hilarious and in no way dependent in playing off of their past romantic history. By taking the focus out of the never-ending romantic storyline, the back and forth between Lana and Archer was appropriately funny and then enhanced by Pam’s zaniness and off the wall presence.

For instance, Pam’s sort of obsessive need to check if the pope was alive by using a huge mirror causing her to crush him with said mirror and then completely freak out about it was just great. Pam’s reaction to the situation, screaming, “I killed the Pope. Jesus Christ I’m going to hell, I’m going to hell” as she climbed over the pope’s body, only to be calmed down by a triple slap from Archer was totally in character and just plain funny. In this scene Archer became the unlikely voice of reason for a little while, that is until Lana appeared and became the more logical thinking person. I like the shifting intricacies of the characters’ interactions that were presented in this episode. When Pam and Archer are together Pam is able to be absolutely crazy, to the point where Archer becomes the more serious character, or it can go the other way like Pam trying to communicate the idea of context to Archer.

Pam, like almost every other ISIS agent, with the exception Lana, is a combination of blundering idiot and surprisingly adept agent. While committing truly moronic mistakes and still being generally insane, she astonishingly becomes fluent in Italian over the eight-hour flight, a freakish act of genius, no doubt and she is overall able to carry out tasks necessary to ensure the mission is completed (even while under the influence of heroin). Lana is always resolved to be the rational agent and clean up whatever mess the others have gotten themselves in. As Pam and Archer become buffoons trying to wake up the pope, Lana becomes almost like an exasperated mother having to deal with her unruly children. There wasn’t much direct interaction between Pam and Lana, but the prospect is promising and I hope they continue to use Pam in the ISIS missions. A Lana/Pam episode is absolutely necessary. 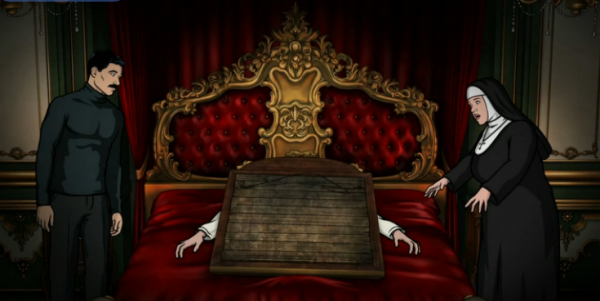 The episode focuses mainly on the Vatican storyline, which is appropriately topical, given all the Catholic hoopla that recently dominated the media. I assume that the timely release of this episode is serendipitous, as the writing for the episodes takes place much earlier than their airdate. There is very little material set at ISIS, apart from the very beginning of the episode there is just one scene that cuts back to ISIS headquarters after the group goes to Italy. The brief scene with Cyril and Cheryl was a little odd and seemed out of place, it gave the impression that there was more to that story, but ended up on the cutting room floor. Without a concrete B-story the episode felt lacking in Malory and Cheryl material, for sure, and the signature, quick-paced Archer transitions from scene to scene were missed. While being an enjoyable episode and fun storyline, the episode felt too thin. It needed a little bit more conflict or, just a solid B-story. It was a very short episode in length and definitely left me wanting more.

Random Thoughts:
-- Is it me, or did ISIS seem uncharacteristically busy? Who were all those people out and about at ISIS headquarters? So many nameless employees, I’m just used to seeing our characters be there without anybody else.
-- Again, the animation in tonight's episode ws just beautiful. Loved how the car chase scene was executed, the color pallette totally evoked Rome, just flawless execution.
-- Did Krieger give you robot hands?” Ha! Lana prying that door open was hilarious, finally those man hands come in handy.
-- Great to see Woodhouse back after such an extended absence. Like many viewers, I noticed that his voice seemed different, which totally threw me off.
-- "Jazz hands!” I am intrigued by Malory and Krieger’s relationship. Who knew they were so close, gong to plays and movies together?